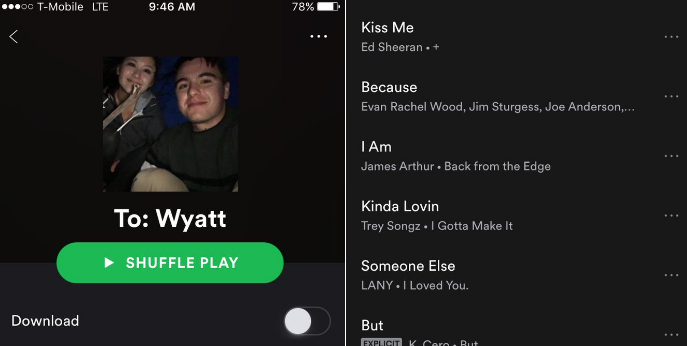 Girl Breaks Up with Boyfriend via Spotify Playlist

Spotify is a great platform for listening to music, finding new artists… and breaking up with your significant other in 2017.

At least, if you’re this chick Kirsten, who thought it would be a creative way to end things with her former boyfriend Wyatt.

Her younger sister Erika quickly noticed and spilled the beans on Twitter. And, everyone including Buzzfeed took notice. Now, the ex-couple has their 15 minutes of fame, but no relationship.

Kirsten’s playlist includes Ed Sheeran, Trey Songz, Miguel and more. But, if it were us…

So my sister has gone on a couple of dates with a guy named Wyatt but she likes someone else so she made him a Spotify playlist and… pic.twitter.com/kJmgrUBwqb

Wyatt responded in the most perfect way possible…

I made her one back btw pic.twitter.com/2ekiEAQqz8