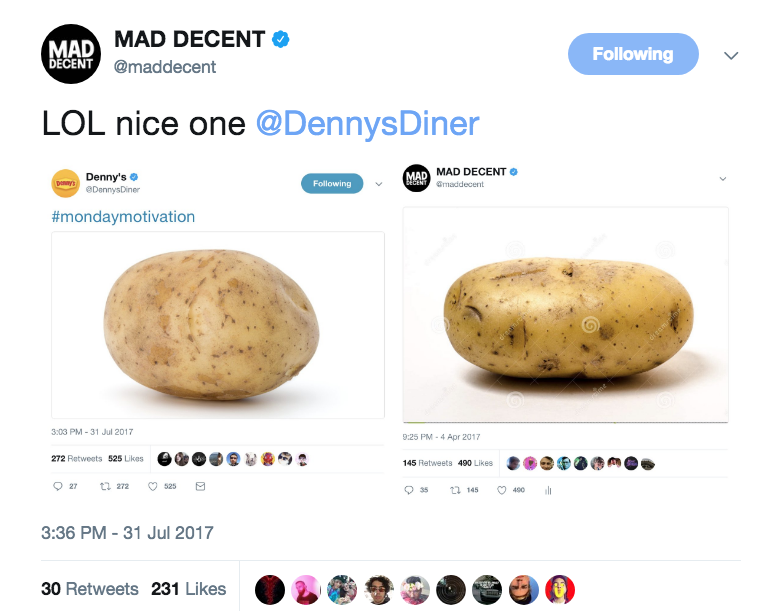 Mad Decent, Denny’s and “Diplo” Go Head To Head On Twitter For This Hilarious Argument

Mad Decent and “Diplo” went in on Denny‘s after the popular breakfast chain stole some inspiration from the @maddecent Twitter account.

While they say imitation is the best form of flattery, Diplo’s record label wasn’t playing around and put the @DennysDiner account on blast…

It was all fun and potatoes until the official yet secondary @_diplo_ account went straight savage on the restaurant. It must be noted, however, that this account is most likely run by actor James Van Der Beek or the writers of What Would Diplo Do? (see here if you need explanation)…

denny's go ahead and recycle all the old internet jokes you want to sell your disgusting food but stay away from my record label. https://t.co/foa3nIyTY5

if you’ve got a chip on your shoulder put some dang dip on the other one ya dummy!

these are much more painful when you realize a room full of ad agency employees are high fiving eachother after launching every single tweet https://t.co/JFc8DOCm7A

dennys, your twitter jokes are exactly the same as your food:

Just when we thought “Diplo” socially shamed Denny’s into a corner, this comeback came in like a hot potato… (Ok, we’ll stop with the bad potato puns that don’t even make sense.)

sorry we tweeted a picture of you without your permission, dilpo 🙁 https://t.co/Ax4zsU6w3U

aw no hard feelings dilpo, please DM us an address we can send a personalized gift to 😉 pic.twitter.com/so0xSlLhvF

Damn. Although the original @diplo account didn’t chime in, it’s safe to say that the real Diplo and the Mad Decent fam won’t be hitting Denny’s up for a Grand Slam, like ever. Unless, this is all just a big publicity stunt…

wait. just realized Dennys was arguing w/ @_diplo_, not @diplo …is this all a stunt for that #WhatWouldDiploDo movie w/ James Van DerBeek?

premiering this thursday on viceland https://t.co/9M7JefSWo5