by Karlie Powell
in For the lulz, um.. story

The real story behind the “ass eating contest” at Lost Lands has been brought to light by one of the contestants.

Camper Brett Fabina sounded off on the Lost Lands Fam Facebook page to clear up any misconceptions about what actually went down with all that booty and whipped cream during Excision‘s first year festival.

“To clear up the ass eating contest. No, we did not actually eat each other’s assholes. We licked whipped cream off of some cheeks,” Fabina explained.

“We also managed to raise $2,255.80 for hurricane relief during the first two days of the festival.” Not through booty eating, mind you — that was a more straight up, food for donations exchange.

The reasoning was simple: “It was my vacation too and I wanted to make booty sundaes.”

“Call me what you want, I don’t give a f*ck,” Fabina continued. “I had a blast and that shit was hilarious. It had nothing to do with the festival or Jeff, so don’t relate what we did to him, the festival or the charity.”

He didn’t sign off without promising to return for Lost Lands 2018 — will the “ass eating contest” become a tradition?! 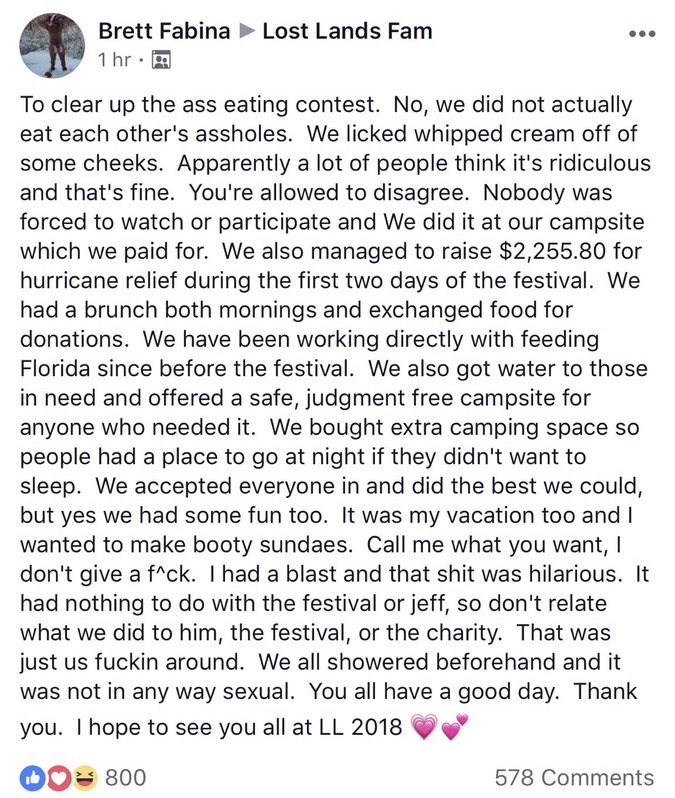