5 Reasons Seven Lions is Having the Best Year Ever

It was love at first listen. About 18 months ago, a friend passed along Seven Lions’ remix of “You’ve Got To Go,” and his Soundcloud page immediately became my sole source of music delight for a span of two months. I saw him open for Alvin Risk at a high school gymnasium in Chicago last December to a crowd of maybe 100 people. Fast forward eight months, and he’s playing to a crowd of thousands of fans singing along to every song at Chicago’s North Coast Music Festival. I was fortunate enough to catch up with him before his second performance in the Windy City. Here are a few reasons why Seven Lions is having a pretty fantastic 2013.

1) He toured with Krewella. Considering Krewella was on Good Morning America this month, I think it’s safe to say they’re one of the fastest climbing acts in the EDM industry right now. And they asked Seven Lions to join them as they traveled across North America by bus on their Get Wet tour. After a short hiatus from the tour due to a very serious case of airplane ear, Seven Lions rounded out the tour with the krew.

2) Above & Beyond asked him to guest mix on Group Therapy. If I were a DJ, I would consider that honor equivalent to being awarded the Nobel Peace Prize. When asked if he had a standout moment this year, he struggled to pinpoint just one thing.

“That’s really tough. There’s been a whole lot of moments that have made me realize…what the f&%# is happening? Definitely Ultra was one of those moments and just more recently having Above & Beyond ask me to do one of their guest mixes on Group Therapy. Anything that has to do with those guys… I really just have tons of respect for them. I just got news that Strangers is on terrestrial radio now and that’s something I never ever thought would happen. And I’ve been writing a shitload of music. As stoked as I am about this year, I’m really excited for what’s coming.”

3) “Strangers” made it onto Kiss FM. Released on 8/21 on Casablanca Records, Strangers quickly became an end-of-summer anthem for trance fans around the world. In addition to airing on terrestrial radio, Strangers topped the Beatport charts and was a fan-voted favorite on many prominent DJ’s podcasts and radio shows. When asked about his collaboration with Myon & Shane 54, it was clear he enjoyed working with everyone’s favorite Hungarian goofballs.

4) He killed it at Ultra Miami. Ultra remains one of the largest and most recognized music festivals in the world, and Seven Lions laid claim to a seat at the EDM roundtable when he threw down a mix of thrashtastic melody at the OWSLA stage. If you missed it or want a refresher, here you go:

5) He may have discovered the secret formula to uniting trance and dubstep fans. When I sat down with trance legend BT over the summer he had nothing but praise for Seven Lions, predicting that “trance-influenced bass music” and artists like Seven Lions and Fractal will bridge the gap between diverse EDM fans with their unique sound. In response to BT’s interpretation of his music, Seven Lions elaborated on the inspiration behind his music.

“My bigger remixes are trance-inspired dubstep, but beyond that…it’s trance-inspired everything. Even the 110 stuff I did has lots of trance elements to it, I just like melody basically. That comes across in anything that I do. Apart from EDM, I listen to a lot of metal still. Viking metal pretty much. I love that stuff. I don’t want to be too focused on what the trends are in the EDM scene because I really feel like that kills creativity. When I get to a festival like this and I see what the crowds are reacting to, it’s impossible to ignore it all together. But to go home and just listen to EDM would not be good for being a creative musician. That’s why I stay away from that.”

Aside from wrapping up a busy tour schedule, Seven Lions is working to polish off two new singles and another EP. I know what I want for Christmas. Speaking of, he released one new single “Serpent of Old” today featuring Ciscandra from Nostalghia. Buy it here. 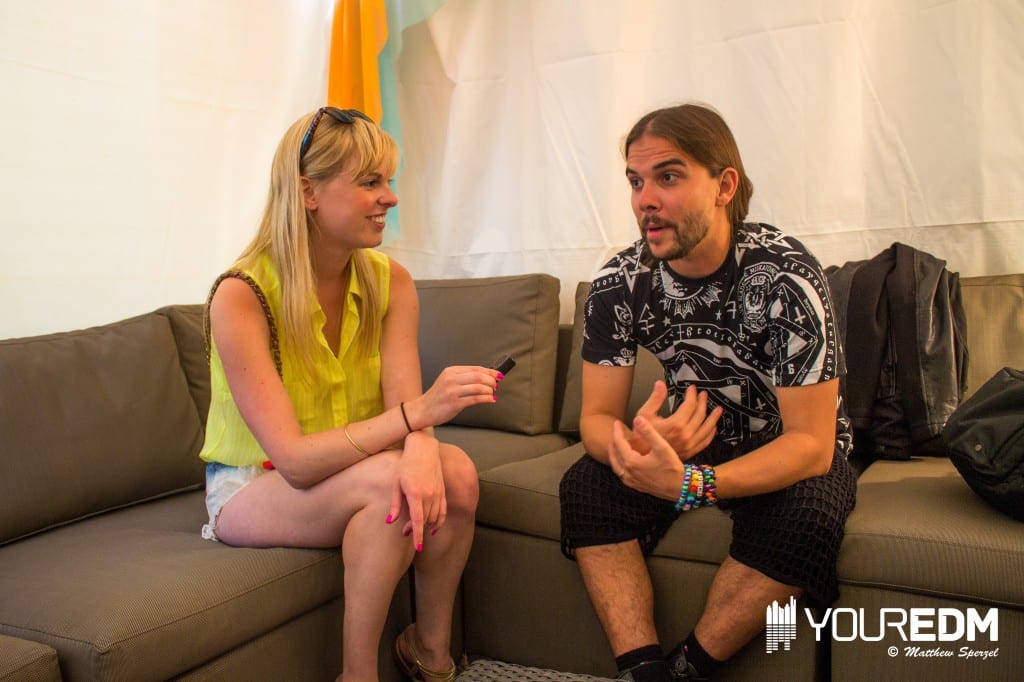