Is The Music Industry Surviving Thanks to EDM? Maybe. Maybe Not.

When I get handed an article to review that is titled “Drug-fueled, EDM-obsessed millennials are saving the music business,” a couple of things go through my mind — let’s go in order of the title. First, “drug-fueled.” Sure, there has been a great deal of stigma attached to molly lately. Deaths this festival season have run rampant, as well as mass hospitalizations and arrests. But make no mistake, there is a large population of EDM fans, myself included, that go to shows sober. As we like to say, “the music is our drug.” Second, “EDM-obsessed.” Well, okay… I see your point, kind of. Every summer, hundreds of music festivals just across the US sport EDM lineups. Warped Tour now has an EDM stage, as does Lollapalooza and Bonnaroo. Heck, some of these EDM acts even play mainstage, so it’s no surprise that they’re bringing in a more diverse crowd. Though, this second point isn’t really an issue in the long run. Third, “millennials.” The oldest DJ alive just passed away at the tender age of 82. I’ll just let that speak for itself. Finally, “saving the music business” …

“… in the last couple of years [EDM] has spawned an industry conservatively estimated to be worth $6.2 billion a year.”

While EDM might be the fastest growing genre, there is no indication of other genres losing steam. When you break it down into individual figures such as music sales like QZ has done, it’s easy to manipulate the figures to prove your point. The chart below looks specifically at digital track sales. These figures inherently favor EDM sales, with sites like Beatport and iTunes being major distributors of EDM albums and singles. Other genres, while also utilizing digital sales, still rely on physical copies as well. 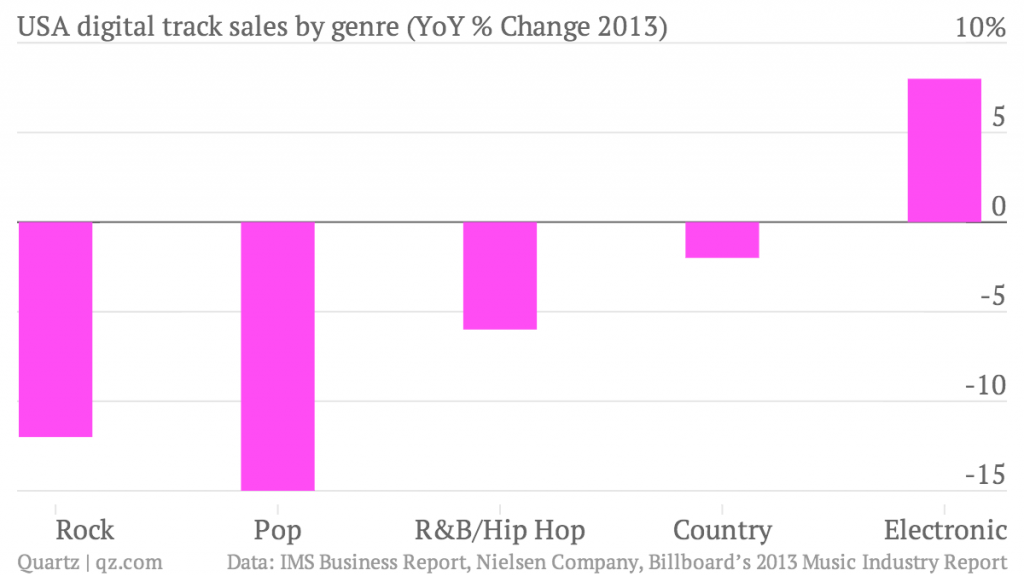 I offer up my own figures — of the top 20 highest grossing tours of all time, not a single EDM act has made the list. This is in large part due to a lack of global presence. EDM is most widely listened to in the US and Europe where many of these producers grew up with the music. On the other hand, bands like U2, The Rolling Stones, or AC/DC have tours spanning multiple years bringing in hundreds of millions of dollars and attracting tens of millions of attendees. EDM just doesn’t have that pull yet. At most, Electric Daisy Carnival will have close to 400,000 attendees on just a single weekend.

My main issue with articles like this from QZ is that they use sensationalized headlines that attract eyes and serve as click-bait yet fail to actually address what the headline supposes. Drugs do not fuel the EDM industry, though they exist as a part of it. Millennials are no more involved with EDM than those born in the 70s and 80s. Tiesto, Sasha and John Digweed for example are all in their late-40s and Carl Cox is 52. The people actually pushing the scene forward are much older than the mean age of the fans.

If I were to point out one characteristic of the EDM industry that really demonstrates our longevity, I’d say it’s the loyalty of the fans. Perhaps not to specific artists (I’ve seen so many people jump ship from Showtek, Borgore, and Bare it’s not even funny) but to the scene as a whole, people are loyal to the music. People haven’t had that kind of loyalty since the heyday of punk. QZ mentions a similarity between EDM and the rise & fall of disco. “Disco took the country by storm in the late 1970s, only to flame out spectacularly amid a fierce backlash from rock music enthusiasts. Proponents of [EDM] obviously don’t think history will repeat itself.” Times have changed, and the “millennials” have quite a bit more influence than we did back in the antiquated days of the 70s.

EDM is here to stay, in whatever form it may become, for years to come.

Miscommunication Between Dancesafe And Diplo Results in Argument

Miscommunication Between Dancesafe And Diplo Results in Argument