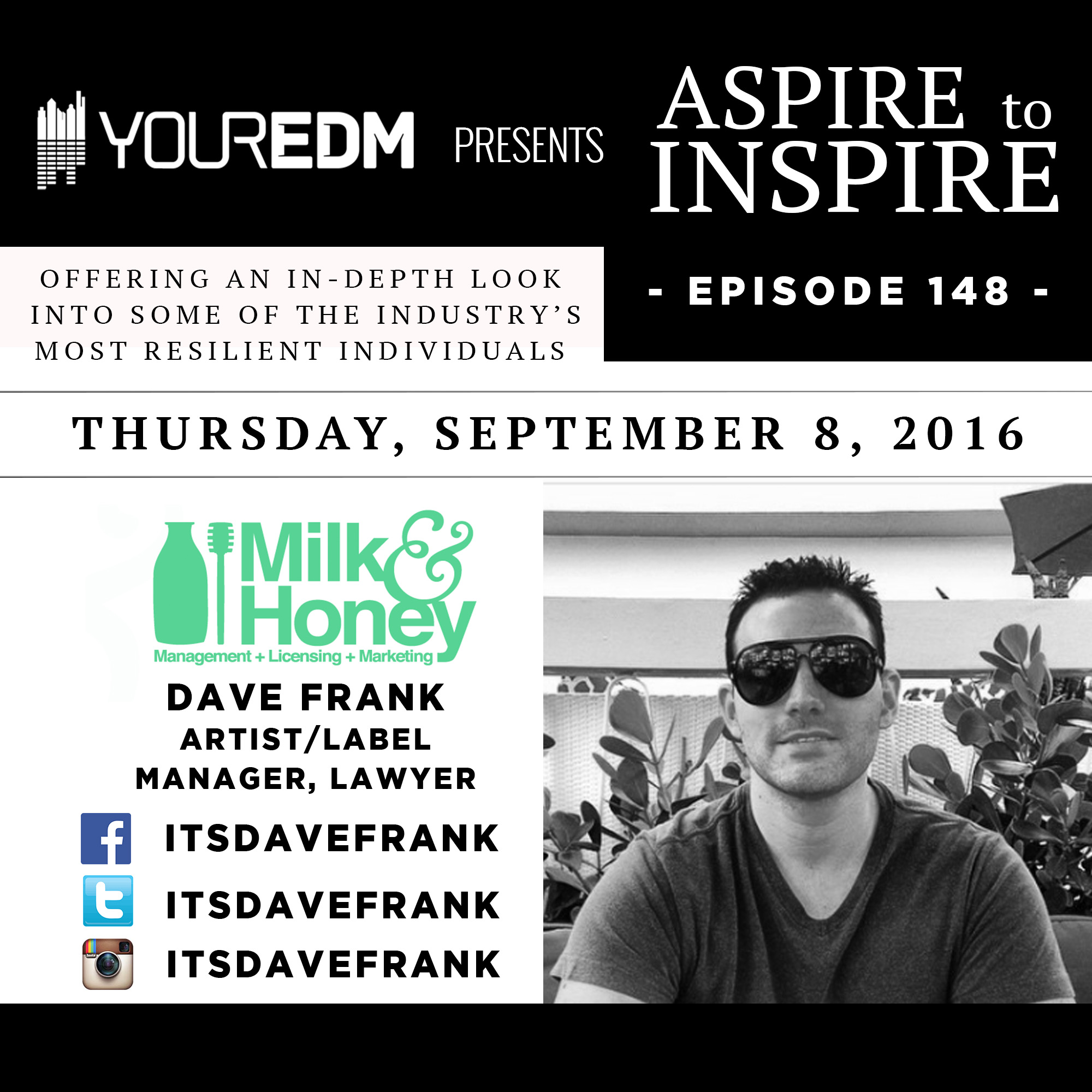 When chasing after a goal we set for ourselves, whether life-long or short term, it all comes down to how bad you really want it and the work you are willing to put in to achieve it.

Growing up as a seriously competitive athlete, competing on an international level in Ice Hockey, Dave Frank was able to build a strong set of skills in discipline and determination. Although he began messing around in music during his senior year at Towson University, it wasn’t until the following year when things really began to blossom.

“At 21, during my first week of law school I came to the realization that I wanted to pursue a full-time career in music. Very quickly, within three weeks of being in Florida, it got to the point where I was on a flight every Thursday evening to meet clients in whatever city they were in and would fly back to Florida each Monday morning. This continued for the next two-and-a-half years – I wound up being on about 250 flights during that time, and was able to pull some strings to schedule my classes in blocks on Tuesdays and Wednesdays to make my travel schedule viable. Essentially, I spent at least six hours a week on a plane, as I understood I needed to get out there to build real, personal relationships within the industry. I got into a routine where I was able to “unplug” during flights to avoid distractions like the Internet, my cell phone, whatever and would hammer out all my reading and outlining during the flights for the upcoming weeks’ classes, and then during the week I would do nothing but music work. Looking back on it, I now understand why all my classmates thought I was a complete nut, but I knew what I wanted and knew what it was going to take to get there. Now they all call me and say I wish I had the foresight you had, you are so lucky to be doing what you love and doing it on your own terms.”

While it was hectic at first, Dave got into a routine and found that pursuing a degree in law while simultaneously working full-time in music was not the unconquerable monster that many make it out to be. For him, it came down to time management and being responsible not only with his music work but his education, and the rest would fall into place as a result. By doing so, Dave landed a job with Tiësto working day-to-day and road management, an incredibly time-consuming commitment that not many are able to step up to the plate for, only to be followed by scoring at the top of his class on the New York State bar exam a year later, at age 25.

“I graduated law school, and the day I graduated I got on a private jet and met Tiësto in Mexico. I didn’t tell my mother—she thought I was going back home to study for the bar exam but I was actually going on a world tour. I worked with him for six months or so, and after that I started studying for the New York bar exam, while continuing to grow my career in the music industry. For three months I did not go out a single time – not even on my birthday, New Year’s Eve, for a nice dinner, nothing. I lived in my bedroom, would wake up around 11am, do my music work until 8pm, quickly eat, and then study law from 8:30pm to 4am. Then do it all over again the next day.”

There are so many things going on around us, especially for those that work in the music industry, that we can become distracted and caught up in the scene way too easily. A great deal of networking is done by meeting with other managers, agents, labels, publishers, lawyers, and by attending shows or going to conferences. However, you need to prioritize the work that needs to be done beforehand. As Dave says, the music industry is all about relationships and communication. Connections made in person will always be stronger than those made on Facebook chat, and emails don’t need to be your whole life story. In such a fast-paced industry, short and sweet often speaks the loudest.

When it comes to what Dave wishes he may have done differently, he doesn’t mix his words when he says take your time and do not rush potential life-altering decisions. Taking the time to properly comb through all the little details and weigh every option before entering into a deal, is a major lesson.

“During my second year of Law School, I began to expand my roster of clients from two to four and an exciting promotion company made me a partnership offer to launch their artist management division. The company had just produced two major events with huge press features and on the surface everything looked and sounded like there was nothing but green pastures ahead. So, I took a leap of faith and dove in head first. Unfortunately, it turned out to be a bunch of smoke and mirrors, and within six weeks the separation process had begun. I should have taken my time there, but it was a lesson learned.

With Milk & Honey, where I am now, I first met the president of the company at EDC Vegas in 2015 and didn’t sign my deal with the company until about a month ago. I guess that one bad experience really hit home for me because I could have crippled myself in debt and killed a dream I had worked so hard for, that I was so close to realizing. I really learned a lot from that experience and how important it is to take your time before deciding to move forward with new relationships and partnerships. What might seem like the perfect fit on paper, may not necessarily be the best marriage in the long run. When I decided to join Milk & Honey I had been talking to numerous management companies because I needed to find a home that was right for me, and that is not something you can put a time limit on. I had very specific needs and wants and I was not going to sacrifice any of them, so I stayed the course until I found the right fit for me.

At the end of the day, you need to have the confidence in yourself, as ultimately you’re the one that will be driving your business, but no one can work at the highest levels without the right support and team behind you. In many cases people get caught up by the name on the front door, however, it’s crucial you look deeper than that, to the people behind that door. Are those people going to provide the proper resources for you, will they take that extra step to fight on your behalf to open doors and knock down walls you may not be able to on your own? If not, you are not at the right place.

Way too often I hear horror stories of someone jumping into a role with delusions of grandeur, then two months later it doesn’t work out and they’re left saying ‘Well, shit! What now?’ Take more time. This is a marathon, not a sprint. You don’t want to be transitioning from position to position and team to team. But again finding the right home isn’t something that happens overnight – you cannot figure it out in two days, it takes months and sometimes even years. You really need to take a step back and analyze where you need to improve, what areas you need help in and who can best provide you that support and guidance to enable you to reach your goals and perpetual success. That being said, and I can’t stress it enough, you need to get your feet on the ground and get out as much as you possibly can, to develop those long-term relationships and consistently nurture them to turn them into profitable ones.”

Having learned all of this firsthand, Dave Frank has also seen the reward. He has watched his artists bloom from profitless teens to industry heavy-hitters on major labels with Grammy nominations, playing massive festivals, and achieving countless other milestones. However, for Dave the little day-to-day wins are just as exciting. Sharing these moments with clients who have turned into family along the way is a big part of what keeps him going.

“My artists turn into my best friends. Not only do I know every detail of what’s going on in their professional careers, I’m very in-tune with their personal lives and what’s going on with their families, loved ones, and friends as I sincerely care about all of them. That genuine love for my clients is really important to me as we’re in this together for the long haul and are truly a selfless family that all help each other. We have our ups and our downs, but that’s part of what makes this so special – when those struggles and sleepless nights of feeling like you’re going nowhere morph into the phone ringing off the hook and offers are flying in so fast you can’t even keep up, is what makes it all worth it.”

If there is any sort of mark that Dave hopes to leave on this industry, it’s that dreams can be achieved if you really want them to be. Whether your dream is to go through law school while working full time, or finding a way to make money and break as a developing artist, it can happen if you are willing to do what it takes. It is not easy and no one is going to hand you gold on a silver platter, but if you put your all into something it will happen. It is said only 1% of artists and professionals alike make money in the music industry, and all too often we see great talent fizzle out because they either tried to do everything the fast way, or don’t know/understand all the different revenue streams an artist can tap into. Taking the time to constantly educate yourself, getting out there and meeting new people every day and night, asking questions, listening and going about things in a professional, respectful manner will ultimately have you turning around one day to see that you achieved everything you wanted after all.