by Matthew Meadow
in Dubstep, Featured, Worth Sharing

Alright, so the DJ Mag Top 100 was a week ago. We can finally go back to our normal daily routines of listening to music that we like without having to bow down before an autocratic list that dictates our listening habits… phew, right?

A random Facebook page called Dubstep Online has released its own list of Top 100 DJs just for dubstep. You wouldn’t think there were that many actual dubstep DJs, but you’d be wrong. Pioneers like Loefah, Kode9, Benga, Hatcha and more top this list and — wait, that’s not right.

The top 10 on this list aren’t bad, but the list as a whole has brought up a lot of discussion that parallels the DJ Mag Top 100 pretty effortlessly. “Do you know the roots of dubstep?” “All of these guys sound the same.” “Where’s the real dubstep!?”

The only producer on the list who helped dubstep in its come up is Rusko, and he’s placed at #9. Other than that, there are a lot of guys who produce pretty damn similar riddim styles, and lots of brostep, and no real innovation brought to the genre.

But again, the only thing we’re doing by debating the list is giving credence to it, and no one person’s top 100 is going to exactly match another’s. So at the end of the day, as with the DJ Mag Top 100 list, listen to who you want to listen to and don’t care that some arbitrary list says your favorite DJ is the 75th best. Probably the most accurate comment on the list is thus, “If the poster removed all the numbers the list would just be a list of favorite producers, not a comparison list.”

If you’re still curious, check out the “list” below, and let us know who your top 10 are. You can also read the discussion in the comments on the list here. 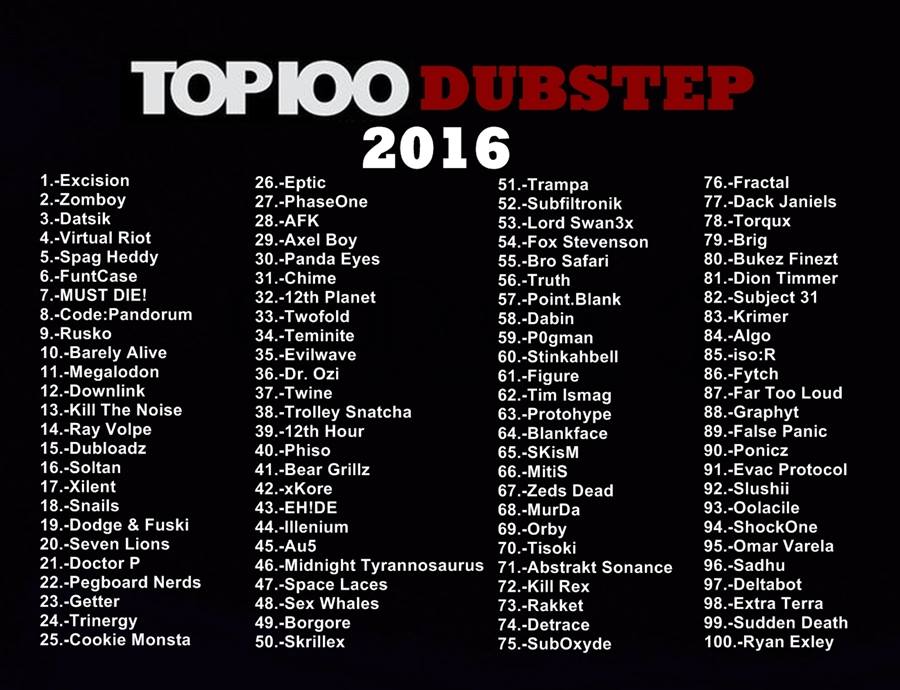