Beats, Barks and Meows: A Lesson in House Music & Animal Noises with Fehrplay

Who needs a pep talk from Dr. Phil when you have Eric Prydz as a mentor? Jonas Fehr, better known as Fehrplay, can tell you it’s nothing short of a dream come true. This Norwegian DJ and producer has catapulted onto the scene since the release of his first single “Meow” on Ministry of Sound in 2010.

With track names growing more and more bizarre these days (umm, “Truffle Pig” and “Queef” anyone?), I was curious to learn about the origins of “Meow.” If you’re like me, the following questions are probably running through your head right now. Did Jonas date a crazy cat lady? Is “Meow” the Norwegian word for mixer? Does Jonas have a secret language comprised of all animal noises?!

“It was just kind of a coincidence, I really struggle to call my songs names. I think that’s the hardest part, coming up with a good name. I just always push it to the last minute. Always save them as wherever I am, like Chicago… Just some friends of mine messing around, they said MEOW!”

So will his next single be titled “Woof”?

He may not be a Belieber (no seriously, we asked him), but Jonas does enjoy listening to a wide range of music in addition to EDM. The king of pop holds a special place in Jonas’ heart; he also enjoys jazz, noting Jamie Cullum as one of his go-to artists for “cheesy jazz” and praises M83 for the creative work they’ve been putting out there in recent years. But that doesn’t mean Jonas isn’t listening to EDM any chance he gets.

“I try to listen to things I can put into my sets, I listen to house music for that. A lot of electronic music as well.”

When Jonas took the stage, he entered a world of his own. That’s not at all to say his stage presence is reserved or subdued but rather he rocks out like he’s messing around in a studio all by himself. The 5 tequila shots that were forced on him by the Palladium crew during his set probably loosened him up a bit too. Kicking it off with a little Mark Knight and peppering in some Jeremy Olander, Eric Prydz and Pryda amongst his own tracks, Jonas couldn’t have put on a better show for his debut Chicago performance.

Fortunately for his Chicago fans, Jonas will be back in less than two months for the second annual Wavefront Music Festival over 4th of July weekend. When asked about his thoughts on playing in Chicago, Jonas had nothing but positive things to say.

“…I’m really excited to be playing there. Chicago is where house music originated in the 80’s and DJs like Frankie Knuckles, Felix da Housecat and DJ Sneak are all from Chicago. So I’m looking forward to be visiting a birthplace of legends. This summer, I’m excited for Wavefront in Chicago and Creamfields in Liverpool! Both should be awesome!”

The Windy City made a great first impression on Jonas and just might have involved some post-show deep dish pizza if all went according to plan.

“It was so cool driving in today, being downtown just looking at all the skyscrapers and everything, that still blows me away every time I go into a big city. You don’t have that in Europe. I want to take pictures but I seem like too much of a tourist… I’ll have to try a non-frozen deep dish pizza. I haven’t eaten for a long time so I’m going to have a massive deep dish pizza.” 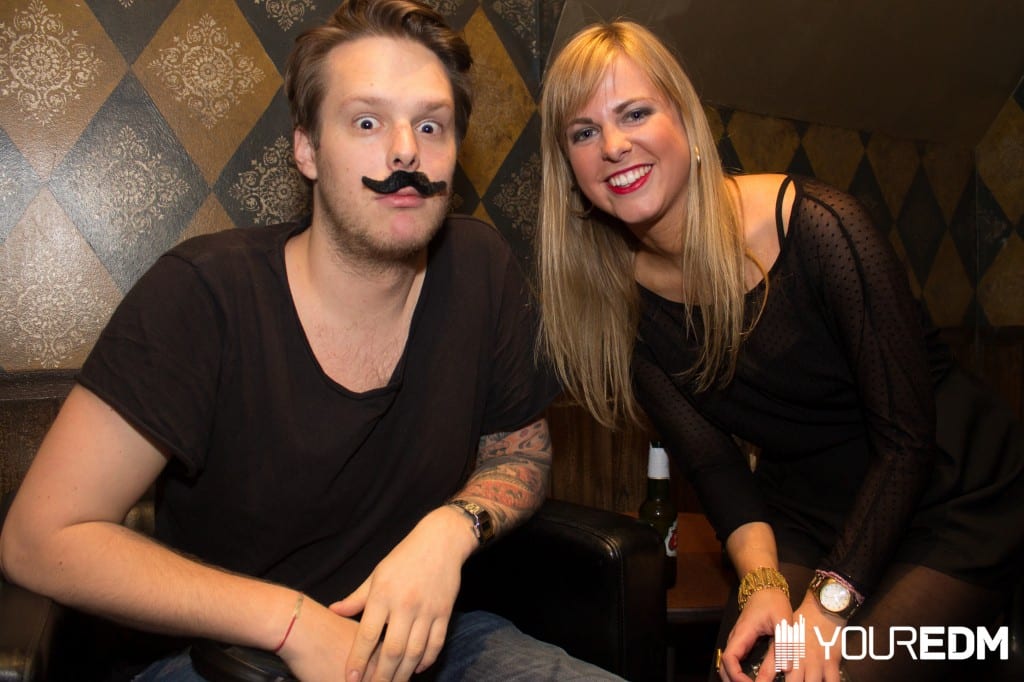 (Getting festive in honor of Cinco de Mayo.)

While originally from Norway, Jonas now calls London home. After discovering a passion for EDM music at a young age, Jonas decided it was time to move to the UK: the epicenter of the EDM scene in Europe.

“I really started liking house music and trance and dance music at quite a young age…like I was kinda going other directions than my friends who were liking pop music and everything and I was liking the club music. Didn’t really know what it was at the time but I had the whole club experience at 12 years old… I really liked trance, I liked the beat. So I started working trance and got into house music and it become a profession rather than a hobby.”

He left Norway to study music production in Manchester but dropped out after only 2 years hopeful that real world experience would be his best shot at success. Looks like his gamble paid off. In just three years he’s been signed to the well-respected Pryda & Friends label and is commonly referred to as Eric Prydz’s protege. Not a bad profession, huh?

“No, no. In my opinion, it’s the best in the world. I get to do what I love and travel the world.”

When asked about any upcoming projects (or potential collaborations with Mr. Prydz), Jonas gives us the answer we were hoping for.

“I’ve got loads of new tracks in the pipeline. Me and Eric have been working on a few things since last summer – nothing quite finished yet, but some really nice ideas have been going back and forth – watch this space!”

It’s almost time for Jonas to polish off his Stella and head downstairs to greet the anxious fans flooding the doors of Palladium, but not before one last question…Are you allergic to camera flashes?! Kidding. But we did want to know if there was any hidden meaning behind Jonas’ decision to hide in the shadows in so many of his photos. Is he trying to send out a message that he wants to maintain some privacy in his personal life?

“I like when an artist is private, it makes it a little bit more mysterious. And that picture was just a coincidence. I put my hands up like that and there were flashes coming from both sides and it wasn’t really intentional. But it looked cool and I said ‘Yeah let’s go with that.’ But nowadays artists are sharing too much of themselves. Music should talk for it. We don’t need to know that much about them, although people like to know that stuff.”

He better get used to the public eye because it’s only a matter of time before Fehrplay becomes a household name.

Check out a sneak peek of our interview and Fehrplay’s May 3rd performance at Palladium at Castle Chicago.

Guetta, Deadmau5, and Bart B More To Collaborate On Fast and Furious 6 Soundtrack

Guetta, Deadmau5, and Bart B More To Collaborate On Fast and Furious 6 Soundtrack