Google is one of the most useful tools of our generation, and in more ways than just helping you find the answer to whatever question your heart desires.

You see, Google is simultaneously collecting heaps upon heaps of data based on what you’re searching and what trends are gaining momentum, and then sorting it by demographic. These numbers prove to be extremely interesting to geeks like myself, and also extremely beneficial to market investors.

So, let’s talk briefly about the electronic dance music scene and it’s recent growth. There is no denying that the scene has burgeoned of late, but the real question is just how much has it grown?

Well, on YouTube, subscribers to EDM channels has risen dramatically, seeing a 60% growth on smartphones, 77% growth via televisions, and 175% growth on gaming consoles. Also, with nine records in the Billboard Top 100 tracks of 2014 the official YouTube versions of these songs have grossed a total 2.3 billion, with a “B,” views.

That’s a lot of views.

More impressive than all of these numbers, though, is the demographic growth seen of late. From January to July of 2014 the interest in EDM from people aged 35-49 has risen a remarkable 80%. Yes, that means there is a good chance that your parents have listened to the very same music we enjoy ourselves. My suspicion? Middle-aged adults are hearkening to their clubbing days, and realizing that we’re doing it even better. More notably this growth represents a shift of electronic dance music to the mainstream, with records hitting pop radio stations around the world.

Along with this demographic shift, listeners under the age of 25 appear to be the largest community enjoying EDM on YouTube, while those between 25 and 34 make up the fastest growing market segment for EDM in 2014.

All of these stats regarding the remarkable growth in EDM go hand-in-hand with the most notable trend that Google has revealed to us, which summarizes the primary reason as to why our scene has seen such rapid growth: 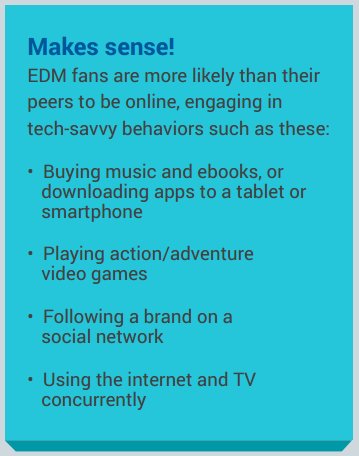 Check out the full info-graphic here.