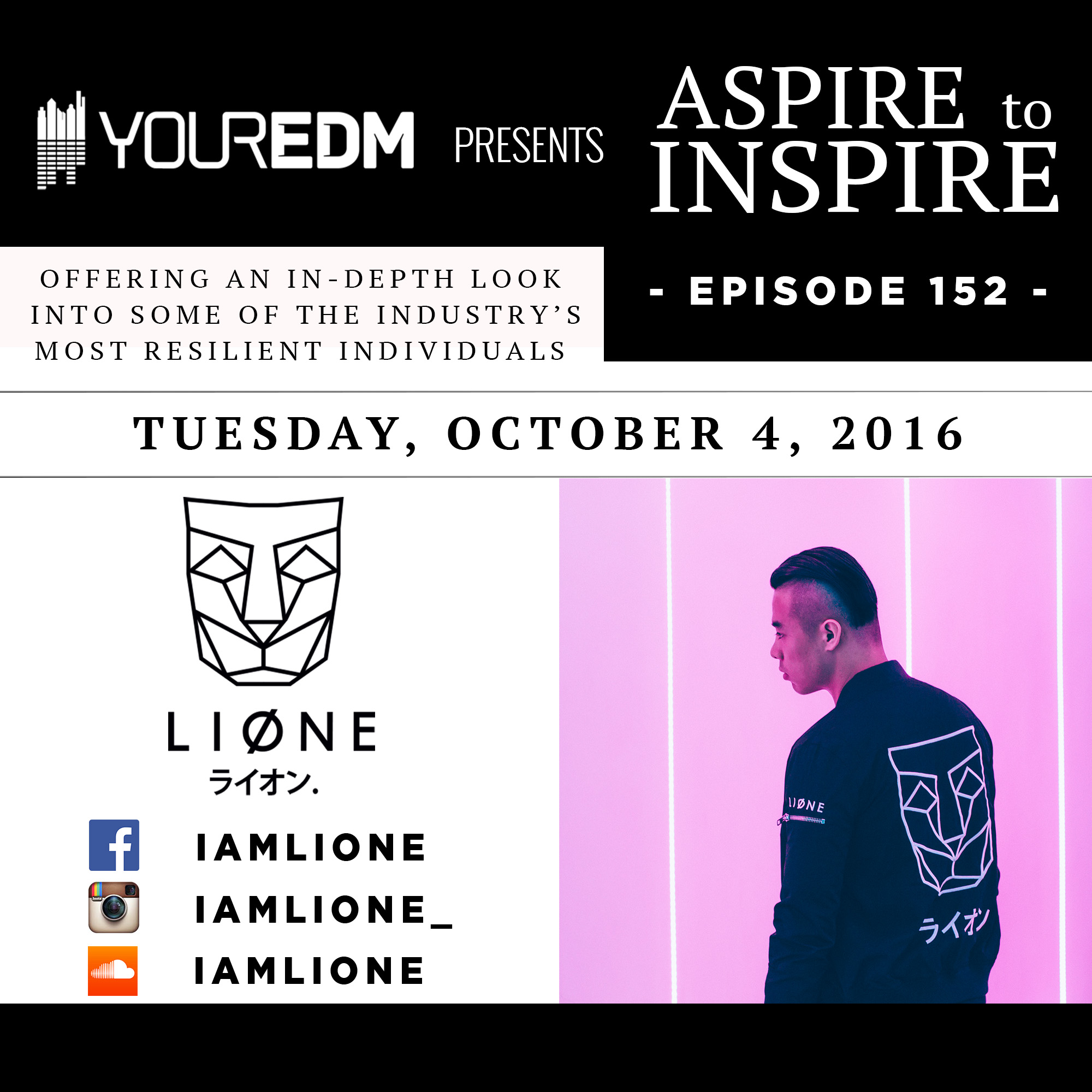 We all have big dreams when we’re young. We are taught to believe that anything is possible and the sky is the limit so we often imagine achieving some of the most difficult dreams/professions like becoming an actor, musician, athlete, astronaut, etc. However, as we get older, we’re less likely to actually pursue those aspirations as we all enter varying degrees of adulthood. Sometimes it takes a certain moment that drastically changes your life to allow you to let go of your fear and truly embark on pursuing that dream. This is what happened with Erich Yeung, better known as up-and-coming producer/musician/DJ, LIONE.

As Erich puts it, he lived a pretty typical childhood learning to play piano at a young age and getting into guitar in his teen years, as bands like Blink-182 and Sum 41 were popular. Although music was a passion, Erich was a shy kid and never really thought he was “cool enough” to be a professional musician. However, when he was 16, his father passed away from cancer. Not only did Erich have to grow up quickly and emotionally support his family, it was then that he realized life is short, and he wanted to make the most of his time on earth.

“When I was 16, my dad was diagnosed with cancer unexpectedly and passed away soon after. It was a strange time for me. I’m the oldest. I have two younger brothers, and they’re way younger (8 and 14 years apart) so it was a weird time. Our family was falling apart a bit. I had to be the rational one, which was weird to see the older members of my family…the people I always looked up to…as kind of a mess. I knew I had to step up. So that was probably the biggest thing that made me want to pursue music and pursue my dreams. Everyone dies; you don’t really realize how precious that time is until something like that happens. When I realized that I only have a certain amount of time on earth, I began asking myself what I wanted to do with my time and what I needed to accomplish so that I would have no regrets when I’m on my deathbed. My answer was to pursue the one thing on this earth that makes me the happiest: my music.”

Despite the heartbreaking loss, Erich found solace in music. Japanese and Asian pop music specifically, along with artists like Rustie and Skrillex, really influenced his early sound and inspired him to follow the musical journey. Knowing he wanted to pursue music as a career, Erich wound up studying at the prestigious Berklee College of Music in Boston. It was during his time there that he had to make a tough life decision. Erich interned at Atlantic Records’ Big Beat division for a year and really started to find his place behind the scenes. However, Erich decided that he had to take his chance and pursue the creative, artistic side of music instead. After graduating he packed up and moved west to Los Angeles.

“I was like you know what, fuck it, I’m going after music, this is what I love to do. It’s like that same thing that I felt when I was 12, should I do it or should I not do it? Should I go to music school? There are so many risks, what if I suck, what if I’m not good enough, what if I crash and burn? Then I went to Berklee College of Music. So I did that for like five years. I took a year off to work for Atlantic Records at their Big Beat division, interned for them, and learned a ton about the industry. It was amazing. However, deep down I still wanted to produce and be a musician. Figuring out which side of the industry to pursue a career in was a huge internal conflict, but I decided creating music was my utmost passion. This was only last year when this happened…three months before I graduated, I moved to L.A. Moved here and started my LIONE project.”

A year in and LIONE has released two huge remixes for Purity Ring’s “Bodyache” and a wonderfully melodic reworking of Jack Ü & Justin Bieber’s “Where R U Now.” Although he’s only played a few shows, his biggest appearance has been at the 7Up Stage at EDC Las Vegas. Additionally, he did a guest mix for Martin Garrix’s second installment of “STMPD Radio” on Apple Music’s Beats 1 this past July. He’s still receiving lots of positive feedback from the fans. Although he is essentially a classically trained musician, Erich has always been drawn to the togetherness that dance music fosters.

“What I like about the dance music scene is that it’s always been centered around enjoying the music together, having an experience together. There’s a sense of unity that I always thought was a very romantic notion. Everyone’s from completely different backgrounds and a lot of people probably wouldn’t be friends in their everyday lives.”

It’s still very early in the musical timeline of LIONE, and though he has a strong artistic vision for his future, admittedly he has no idea where he’ll ultimately end up. The early returns have been very positive, however. We’re excited to see the upcoming fan and industry reactions as he has hinted at an original debut single within the next month and has an EP in the works as well. For LIONE, he took a family tragedy and turned it into the motivation he needed to pursue his passion. As Erich says, music is intrinsically linked to human emotion and mindset. Your mindset can determine a lot of what you do. Although it’s a cliché line, believe and you will achieve, it’s true. If your mindset isn’t right, success will be difficult to find.

“Your perspective, mindset, and emotions can be the difference between whether you do something amazing tomorrow, or whether you never accomplish anything. The minute there’s a change in mindset, that’s when something special starts to happen.”