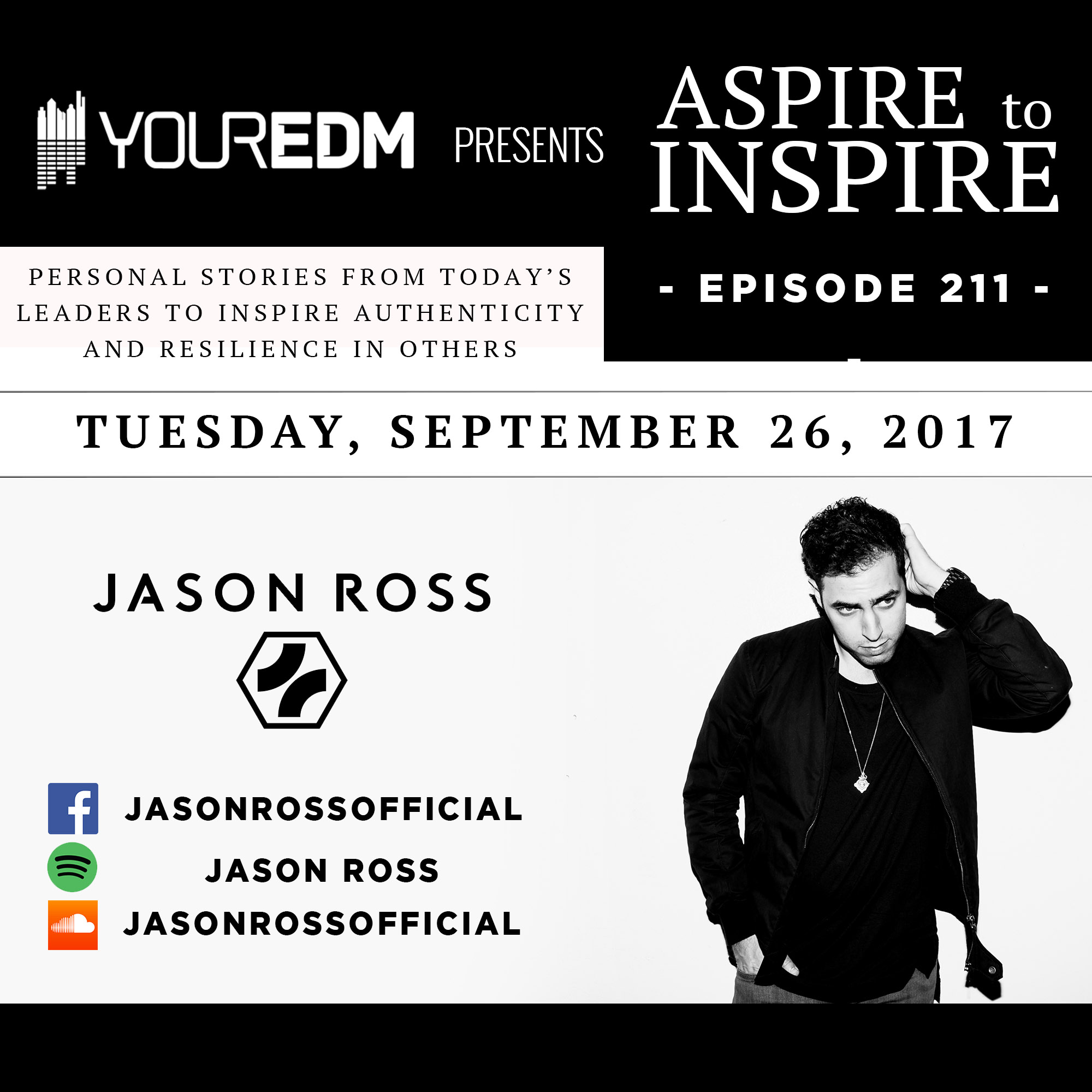 There are few things in life that are as joyously wonderful and as purely simple as listening to music. Music provides a backdrop for our lives and can be an escape that many people seek refuge in. Trance music in particular is known for hitting you right in the feels and bringing out waves of emotions in listeners. All musical artists have different goals; some legitimately want to change the world, others are seeking fame and riches, but then there are those like trance producer/DJ, Jason Ross who are doing it because they love making music and love making people feel something. Jason says his ultimate goal is to uplift his fans and it’s amazing how one song can do just that. Fresh off his spectacular B2B set with Seven Lions at Above & Beyond‘s ABGT250 event, we sat down with Jason Ross to chat about getting to where he is today, his inspirations, and how a lot of hard work and passion can pay off in the end.

“People interpret music in so many different ways. It’s amazing to just inspire people to overcome whatever they’re going through, or inspire them to follow their dreams, or to have a better outlook on life. I know there’s a lot going on in this world so giving people even just a few minutes to be lifted up is my goal. At shows, I think even more so, to lift everyone in the crowd up and give them an amazing night. I hope my music will inspire them to do whatever it is they want to do or to get through their battles.”

While Jason cites many musical influences including jazz and The Beatles, he mentions ATB’s classic song “Till I Come” as one of the main reasons he wanted to make dance music. He also mentioned how he was always drawn to more melodic sounds growing up, so trance would be the natural destination. Although Jason had his epiphany and knew what he wanted to do, he did not yet learn how to do it. That would come later in college.

“In terms of electronic music, when I first heard classics like ATB’s ‘Till I Come’, I knew that I wanted to make music like him and play it out. I didn’t really know what DJing was when I was younger, but I knew I wanted to be that person, playing and making that kind of music. So it’s really cool to see it all come to life.”

Originally from Minnesota, Jason headed out west to California in his late teens and found himself attending college at San Diego State University. While he had been a fan of dance music, it wasn’t until his college days that he “discovered the scene.” It was while attending a party that was playing when he found the opening DJ who changed his life. Not only did this one set inspire Jason even more to pursue his DJ dreams, he found a willing mentor who showed him the ways of both DJing and production. After his unofficial college internship, he headed home to San Diego fully focused on making music his career.

“Before college I didn’t really know about the scene; I just listened to the music. In college I was introduced to this local DJ who played clubs downtown and produced on the side. We become good friends and he introduced me to Ableton. He really played a mentorship role for me in my college years. After I graduated, I moved home, and really focused 100% on music.”

Armed with know-how to pursue his dreams, Jason started making music, but at first, he was getting no traction or response. He was nearing the point of giving up. Jason decided to follow his heart and make music that he truly loved, making what would become his breakout track “Burma.” Although he was still unsure of the track, he shared it with a friend who sent it to a smaller label and they ended up signing it. It was after this that Jason’s demo made its way into the hands of a little group called Above & Beyond. They played “Burma” for three straight weeks on Group Therapy and today Jason Ross is one of Anjunabeats’ top artists.

“A great small story, I had a release called ‘Burma.’ It was the point before any of this took off. I was trying to make music that was popular because that’s what the masses were listening to. So I was making progressive, like the progressive music back in the day, and I thought it was the way to do it. But I wasn’t really happy with it nor did it feel authentic. I was trying to be someone that I was not to ‘make it.’ After I realized that’s not the way to go, I made a track called ‘Burma.’ It was more melodic, emotional, and ‘trance-y’ if you will. So I sent it to a friend of mine and he loved it so he sent it to Monster Tunes, a smaller trance label. I didn’t think Monster Tunes would like ‘Burma’ and was really questioning myself. They ended up loving it and releasing it. And from there, A&B played it on their radio show, Group Therapy, three weeks in a row, which is unheard of for any non-Anjuna artist. That was really what set off everything. It all came from that small, yet profound moment.”

It wasn’t overnight, it took many setbacks and a lot of uncertainty, but through hard work and a laser focus on his dreams, Jason was able to make them come true. That’s his recommendation to anyone else trying to accomplish what he has. Be ready to work, but have faith, you have to visualize that light at the end of the tunnel to break through to the other side. From there, anything is possible.

“It was actually that week that Above & Beyond played the track on their radio show that I was just about to give up, get a real job, and get my own place. That was really the turning point. You hear this a lot, but that moment when you’re on the verge of giving up, and you choose to press on…that’s when things turn and change. I guess what really got me through that was faith that things would work out, and just going for my dreams and holding nothing back. A lot of people ask me how do I do it? Hard work, sacrifice, and faith that things will work out is what it comes down to, but you really gotta put 110% into it to really make something great of yourself. To do something that you’ve always dreamed of doing, that’s really what it takes.”