Months ago, Max Vangeli started beef with Diplo on Twitter and it seems like he’s been riding that wave ever since. Legitimately, much of the dance music industry was worried for his mental health, fearing that he’d reached a breaking point and needed to be brought back down to Earth. Now, months later, approaching the end of the year, this is seeming more and more like the “real” Max Vangeli that we just hadn’t seen yet.

In his latest attempt at relevancy (and I guess flexing?), Vangeli posted the late Avicii’s phone number on social media.

“I have shared this with my group of Tim fans and as much as its weird as fuk im just going to put it here,” he explained. “I text the ones I love all the fukin time and if you want to say something to the legend then DO IT! If I go to hell for this I know Tim will pull me out.”

There’s no arguing that speaking to the ones you’ve lost can be cathartic. However, giving out anyone’s phone number, especially that of a deceased public figure like Avicii, is extremely disrespectful.

While there are a handful of people supporting Vangeli’s post, the vast majority are calling for him to take it down or echoing sentiments here of disrespect. Not to mention the number likely isn’t active anymore.

As EDM.com’s John Cameron writes, “Max Vangeli has found his name in the mouths of EDM fans for all the wrong reasons lately.” We wholeheartedly agree. 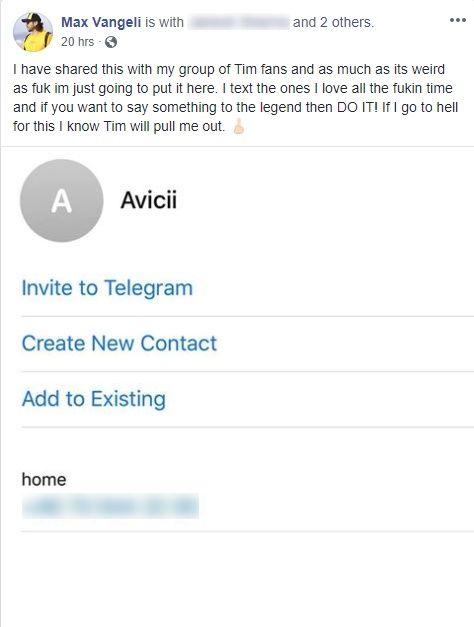