Yesterday, the EDM community was collectively brought to nausea when Dimitri Vegas & Like Mike were named the #1 DJs in the world. The DJ Mag Top 100 had been steadily faltering in quality, consistency, and credibility for years now, but this year’s list is the icing on the already-shit cake.

Hardwell, last year’s #1 DJ was ousted and dropped to #2. And while his on-stage persona seemed to present a happy and appreciative façade, his real feelings lay bubbling just beneath the surface.

In a since deleted tweet, Hardwell responded to a tweet by 3LAU calling out the duo for their use of iPads in collecting votes. Hardwell, and most other top-tier producers/DJs, are guilty of putting ad money and marketing behind their own campaigns, but none are so dastardly and brazen as this Belgian duo. 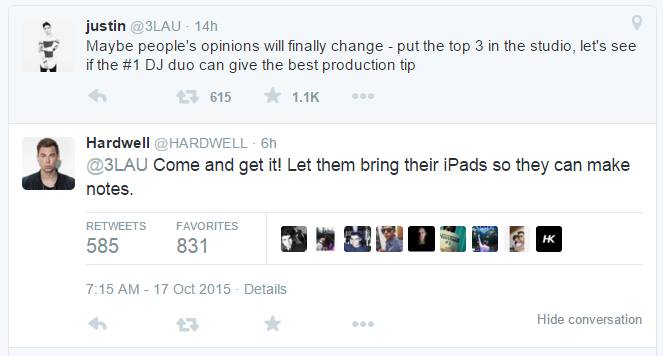 In the coming days or weeks, expect DJ Mag to put out an official press release concerning the obvious voting fraud, but don’t expect them to apologize.