On April 1, 2016, Aerial Banners, Inc. flew a pretty ballsy banner over Miami’s South Beach, calling out Club Space for not paying their bill. Dana and Bob Benyo, the owners of Aerial Banners, say that Space was typically always six months to year behind in their payments, and prior to flying the banner, were being completely ignored with their phone calls and emails.

“The biggest problem that I had is that they would say, ‘Oh, no. We don’t owe you that.’ And we’d say, ‘Yeah you do. You guys never paid that invoice.’ And that went on for the last three of four years.”

Now Club Space is suing Aerial Banners for damages in excess of $15,000 for defamation, and the club claims that Aerial Banners were upset because Space had changed to a different company.

However, Aerial Banners is countersuing for Space’s nonpayment, and despite being asked to stop flying the banner, Bob says, “we’re going to sue each other and I’m going to fly a bunch of banners anyway.”

We’ve got to hand it to the Benyos for their iron courage and not backing down to Space. Check out the banner in question below. 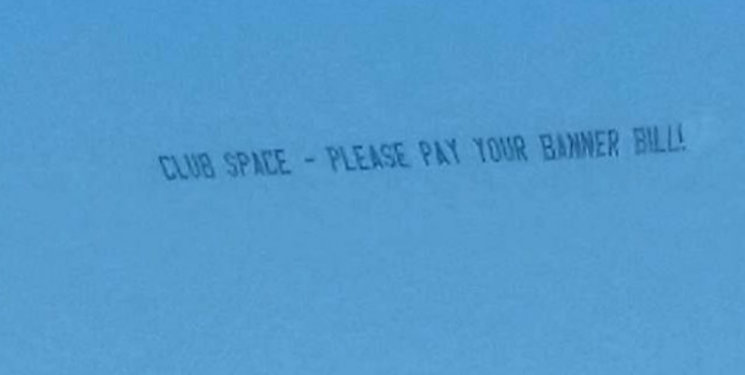