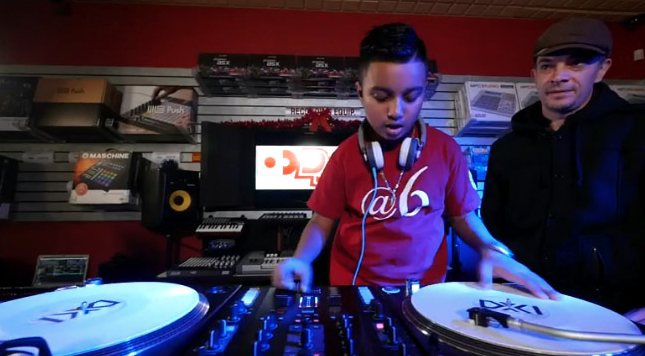 A year and a half ago, we reported on the world’s youngest club DJ — according to Guinness Book of World Records — going viral, a then-nine-year-old boy by the name of Dextrous One. It may seem like young DJs run a dime a dozen these days, but Dextrous One clearly possessed a knack for impressive DJing given his age.

Now 10-years-old, Dextrous One pops into the spotlight once again with an impressive entry into Red Bull’s 3Style World DJ Championships. The young DJ uploaded his nearly six-minute mix entry to the competition to his Facebook page, and the mix itself is surprisingly pretty stellar. Opening with a great remix of the SpongeBob SquarePants theme song, Dextrous One effortlessly scratches and crosses between hits from DJ Khaled, Denzel Curry, Grandmaster Flash and more. His scratching skill hints at A-Trak levels of expertise, managing to sample dozens of songs without ever overwhelming the mix.

The Red Bull 3Style World DJ Championships began in 2010, and has pitted some of the world’s best DJs against each other in locations across the globe. This year’s final takes place in Krakow, Poland, with the competition’s participants to be announced in late June. The selected participants will then compete in local events from September to November before the final showdown in Krakow. After witnessing Dextrous One’s great set, we hope to see him selected as participant in this year’s competition.

Here is my 2017 Redbull 3Style Submission. Hope you enjoy!! Please like, comment and share!!!! And yes I am only 10 years old!!! #WorldsYoungestDj #DextrousOne #@6 #DX1Please follow me on social mediaInstagram: @TheDextrousOneFacebook Dextrous OneTwitter: @DextrousOneFor Bookings – Ryan: 416-602-2086