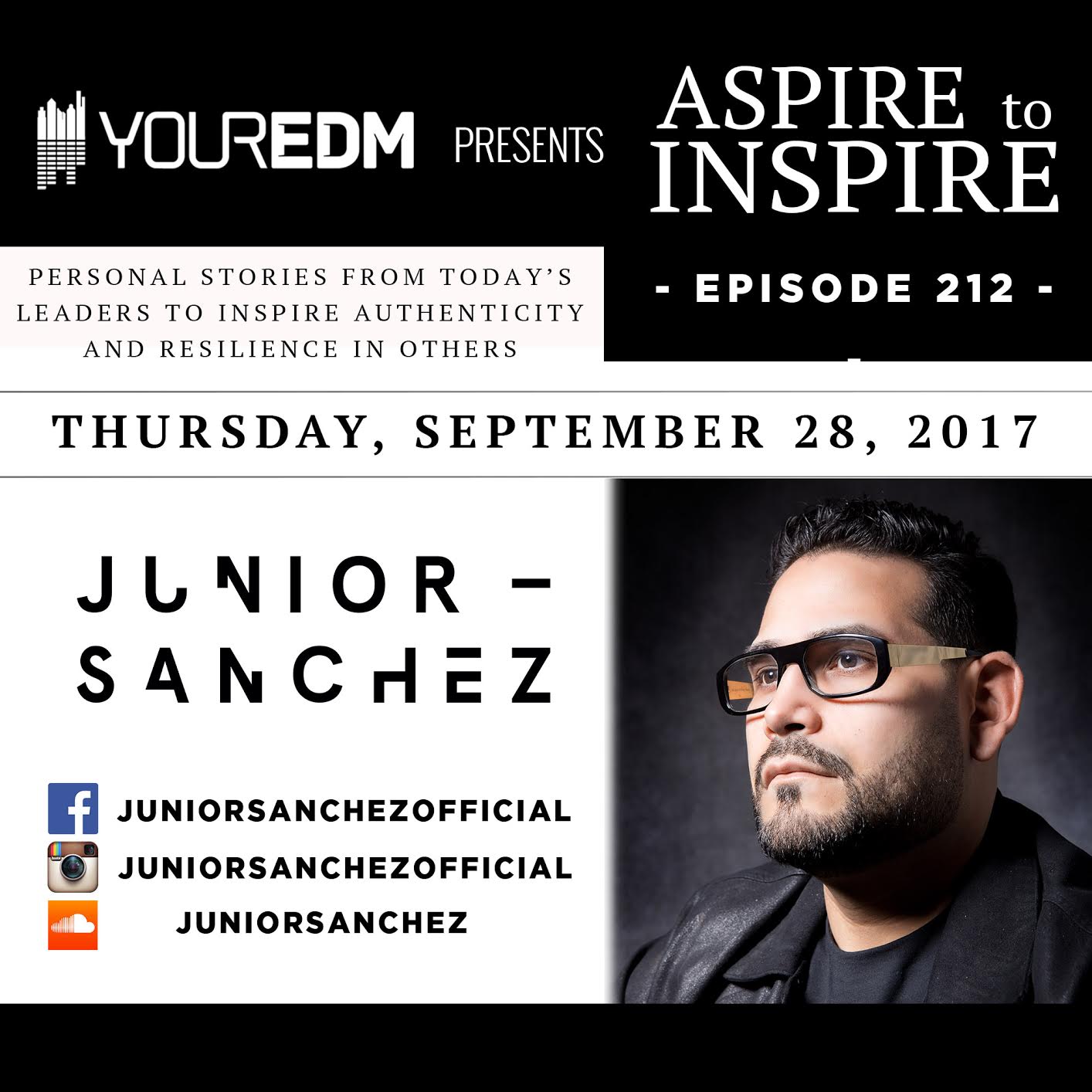 Chasing after a dream is something that everyone thinks about, but not everyone does. For those that do, what happens after you get there? How do you stay on top of your craft and continue to push your own boundaries? How do you stay “relevant” as people say?

As we spoke with producer/DJ, Junior Sanchez about what goes into a career in the arts, some of the answers to those questions certainly rose to the surface. Keep the art in the art, and don’t be afraid to listen to those who truly want to help you.

Growing up, Junior Sanchez was already surrounded by music. The heavy influence came from all different directions, as his five other siblings had very different tastes in music.

“I grew up the youngest of six siblings, surrounded by music. They all had their own styles. One brother was into industrial new age and my sister was into Boston, Blue Oyster Cult, etc. Another was into hip-hop with RUN DMC and Slick Rick. So I was surrounded by music and very early on I remember listening to records. When they all moved, they all left me with crates of vinyl. That was the true inspiration for me, but when I stumbled upon house music, that was when I felt like I found something that was my own. I felt like everything else was kind of “theirs” in a way, but house was entirely my own. From an early age I was definitely inspired by music through all of my siblings, though.”

Even with all of the influence coming from family, Junior’s mother had some difficulty getting on board with his involvement in the music world. That being said, Junior tells us it was never out of malice. Her lack of support in the beginning was merely a matter of not understanding his craft.

“It’s not that she hated the music. She thought I was just partying. She was very religious— Brazilian and Catholic. Going out on a Wednesday to Sound Bar to hear someone play and still manage to make it home in time to catch the bus to school in the morning was weird to her. She just didn’t understand the whole going out and dressing crazy thing.”

Junior’s success in the music industry, however, started almost as early as his interest in the culture. By the age of 11, Junior had started DJing and had his first track signed by the time he was a sophomore in high school in 1994. For him that was the moment when music shifted from a hobby to something he could build a life from.

“I remember signing my first record to Strictly Rhythm. Gladys Pizarro signed it and I remember her cutting me a check for like $1,200. I looked at the check and thought ‘Okay… if I make one of these a month, I can live.’ I remember opening the bank account and thinking that this could really be something.”

Looking back on the course of his career and life that has been so deeply invested in his art, there are definitely a few things he would like the opportunity to tell his former self – the most prominent would be to be a better listener. As someone who marched to the beat of their own drum when he first started, Junior wishes that he had taken in more advice from the people around him that truly wanted to help steer him in the right direction. With that, he also wishes that he would have slowed down a bit in terms of his progression as an artist and not tried to evolve so fast.

Another thing Junior wishes he had gone about differently is his approach to his career. It is not uncommon for artists, regardless of the type of art, to see only the creation and not the business side of the entire picture.

“One of my Achilles Heels is having to balance being too much of an artist and not really looking at it as a business/career. I always looked at it as art so there were a lot of strategic things I never did because I just cared about the art and the organic way of doing things. As other people get into this business, they’re very strategic; they have a plan. I never had a plan because I never knew what I was doing. I remember having a top 10 record in the UK and I didn’t really know what it was all about because I didn’t have the guidance/wisdom from others. Being a young DJ wasn’t something spoken about back then. Age wasn’t something that mattered. When I was at the clubs all the time as a little kid, nobody ever asked me about my age and that was good b/c I always wanted to hide the fact that I was young — I wasn’t supposed to be there. However, when you’re cool or when you’re looked at…that’s just how it was. Back in the 70s I wasn’t around for Studio 54, but Brooke Shields was in there when she was like 14 [laughs]. I guess it was a different time when you were just part of a subculture where nobody questioned you.”

Beyond the trials and tribulations that a person can have within their career, artists are also still people. Just like the rest of us, life continues to happen at sometimes inconvenient times—causing us pain and struggle that we don’t always know how to process. For Junior, beyond the usual financial struggles of a young adult living their life and trying to push forward as an artist, there was family loss that weighed a lot on him personally.

“My brother passed away 11 years ago and that was really hard on me. I was in the middle of a chaotic life, meaning a lot of monumental things were happening all at the same time. I was touring pretty frequently, releasing a lot of music, and then having him dying from cancer was really tough. I didn’t quite know how to process it because I had never really dealt with death before. I remember holding his hand when he was in a coma basically on his deathbed. I think the next day I got on a plane to Winter Music Conference. I just didn’t know how to deal with it. It was strange. I remember that vividly because it was something that, as I got older, I began to understand what was really going on.”

As Junior continues to grow within his creativity, he has reached some major milestones along the way. A 10+-year project has culminated into an album with plans for a second, his Brobot label continuously releases music of his and friends to Armada, and he will soon be working towards furthering music education for younger generations in schools.

But as busy as that may sound, Junior still finds the time to take a step back and look at the bigger picture, as not nearly enough of us do. With all of the numbers and analytics of our day-to-day lives that it somehow turned into someone’s profit, it’s important to take a moment to remember why we do the things we do and how it can affect others.

“I think it’s inevitable that data and analytics is such a big part of our culture. It is such a part of every art form whether it’s music or fashion or TV. It’s becoming a way to strategically market people. What I think it’s missing or what is actually hurting is the art sometimes because you can’t just put data on culture or put analytics on music. So I find that it’s a necessary evil, but you can’t lose the art within the art. We have to continue with the pure organic part of doing things for great intentions. I think at some point there will be some sort of digital or social revolution where people are not going to believe things. They’re going to be over the numbers. I want the truth to come back into the art and leave out the nonsense. At the end of the day, the wheel doesn’t need to be reinvented. I don’t think it even can be, it just slows down and takes another creative person to come back around and spin it again.”

When it comes to the rest of us, there is still a lot we can do as listeners to help the world along in appreciation of cultures worldwide.

“Honestly this will sound like a dream, but I would love to see evolution frequency. I hope that we all, in humanity at a certain point, can evolve mentally. That we can all be on the same frequency where we can be in tune with one another and not hate. Not hate because of religion or sexual preference or anything. That takes tuning. It takes being at a certain level mentally. Some people are already there, some people aren’t, but I fully believe we can all get there at some point.”