Q&A and Guest Mix: Mefjus’s Album ‘Manifest’ on Vision Is Out Tomorrow

We all knew that Mefjus’s new album has been a long time in the making. Singles from Manifest, out on Noisia’s Vision recordings imprint tomorrow, April 26, have been releasing as teasers for almost two months. It also stands to reason that an album this huge would take a while to put together. According to Mefjus, it did indeed take almost three years from concept to completion, so it truly is a labor of love.

The tracks on Manifest are big and bold, dramatic and cinematic, and, by Mef’s own admission, very different from his previous work. That said, it’s still a diverse album with a lot of twists and turns and surprises. It’s likely the first really epic solo album of 2018, and it sounds like Mefjus’s journey to make it was just as epic.

With all the work and time Mefjus has been putting in and the album just hours from being released, Your EDM is honored that he chose not only to sit down with us and give his all his thoughts and feelings about the album but also a full guest mix. There’s not much more needed in an intro; Mef says it all with his music and his words, so let’s get to it!

This album has been in the works for you for a while, which means you’ve been working on it for a while. How did you know when it was finished from your point of view?

The whole project started out as an EP for Vision. The label, Noisia and I spent quite some time in feedback and A&R sessions and it turned out that this EP was shaping up to be an album.

I remember sending my first demos to Noisia somewhere in late 2015, after we had worked on some tracks together. In fact my track “Sinkhole” was started on 11th November 2015 and I remember showing it to them, and they said something in the lines of, “hey look at this, we’ve got a song called ‘Sinkhole’ too!“ and that was before Outer Edges was even announced. After multiple, very helpful back-and-forth-sessions with them and Vision we decided to put a deadline on it and release the album in April 2018.

How did you decide to release the album on Vision?

After my first album – during the time we made “Clusterfunk” and “Reptilians” – the Noisia guys approached me about making something for Vision. As mentioned above, the initial idea was to make an EP but the process of writing new music, especially for Vision and the fantastic A&R with Noisia, made me reconsider and actually make a full album instead. I was working on some collaborative material as well that could potentially have gone on the album like the “Wastemen” EP with Phace , “Decypher” with Kasra and “Efficient” with Icicle but they turned out to be their own entities on different labels. After those decisions it became quite clear that this album would be a solo album after all.

Was there a theme or certain vibe you wanted to create with this album or was it just a collection you felt went well together?

The main intention of making this album was to present an updated version of myself. Not only in production but also in songwriting. I was at a point where I wasn’t satisfied with what I was doing. That meant I had to reconsider what I was doing and what I wanted to do. Trying new technical approaches in the studio, breaking certain habits, but also listening to more music and trying to engage with music differently. I remember a couple of times in the studio at A&R sessions where I referred to a Mefjus 2.0 and that if I was doing an album it had to be a real step up. I felt the need to up my game.

How did you come up with the title of the album?

The title was found at a very late stage of the album, but then ultimately felt very natural. Up to that point when friends asked me what I was working on I would answer that I was working on an album that had the intention to be some sort of a statement. About how I see drum and bass and what I love about it in the studio, in my car, or playing it out at gigs. Some sort of manifesto that is 100% me.

That title really stuck with me and I felt it was a really strong statement. As with my first album “Emulation” I really like the fact that “Manifest” means the same in English as in German.

It sounds like you were working with more halftime and other beat structures a lot on this album, such as in “Assembler.” How do you find these slower tempos to work with? Is it helpful or more difficult to have a slower tempo?

People who know me know that I’ve always been a big fan of hip-hop and beats stuff. But before this whole “halftime” movement was introduced into the drum and bass realm I never thought about producing it as Mefjus. I am very happy that people like Ivy Lab, Alix Perez with his 1985 crew and many others opened the door and crossed that bridge. It brought back a lot of fun into the studio and also on stage. To answer your question, I don’t think it’s either helpful or more difficult per se. Sometimes you just feel more comfortable doing something slower and sometimes it’s more fun to work in a higher tempo. I think it’s nice to have changes. Again this goes for studio and the stage!

There’s a really cinematic, grand vibe in a lot of these tracks, both in the sound design and in the way the synths are arranged. Did you want the tracks to have a big, bold sound like this? How did you keep it cohesive along the tracks?

It’s funny you say that, because it wasn’t intentional at all. I definitely tried to approach things differently with this album, but there was no specific “cinematic” attitude towards it. It must have happened naturally and/or by accident as I was also widening the circle of music that I was listening to. Cohesiveness was very important to me though. I feel older tracks of mine sometimes lacked the musicality or the songwriting aspect in some way and I wanted to change that. Something I also learned during this album was that sounds that shouldn’t work together aesthetically sometimes actually really do.

That said about the vibes, there’s a lot of diversity among the tracks. How did you try to keep it fresh both for yourself and for the listeners?

Before Noisia, Vision and I decided on the final track list we had a pool of about 28 songs to choose from. I wanted every aspect that I love about drum and bass covered on this record and deliver an album that is, as you said, as varied and diverse as possible. I thought it would be harder to narrow down the final track list as I was quite passionate about all the songs, but the flow of the arrangement then made the decision quite easy. Ultimately I think that the process of me going to different places musically and then us making compromises on the track list as a team made the album what it is.

Re: the guest mix, did you put it together like you would for one of your live sets? What kind of vibe did you want to put across to YEDM listeners?

I’ve made sure I put a lot of the album in there, some VIPs but also songs from colleagues that I really feel. Furthermore it is an indication of what you can expect from a DJ set from me these days. I really hope you guys enjoy what I put together for you. 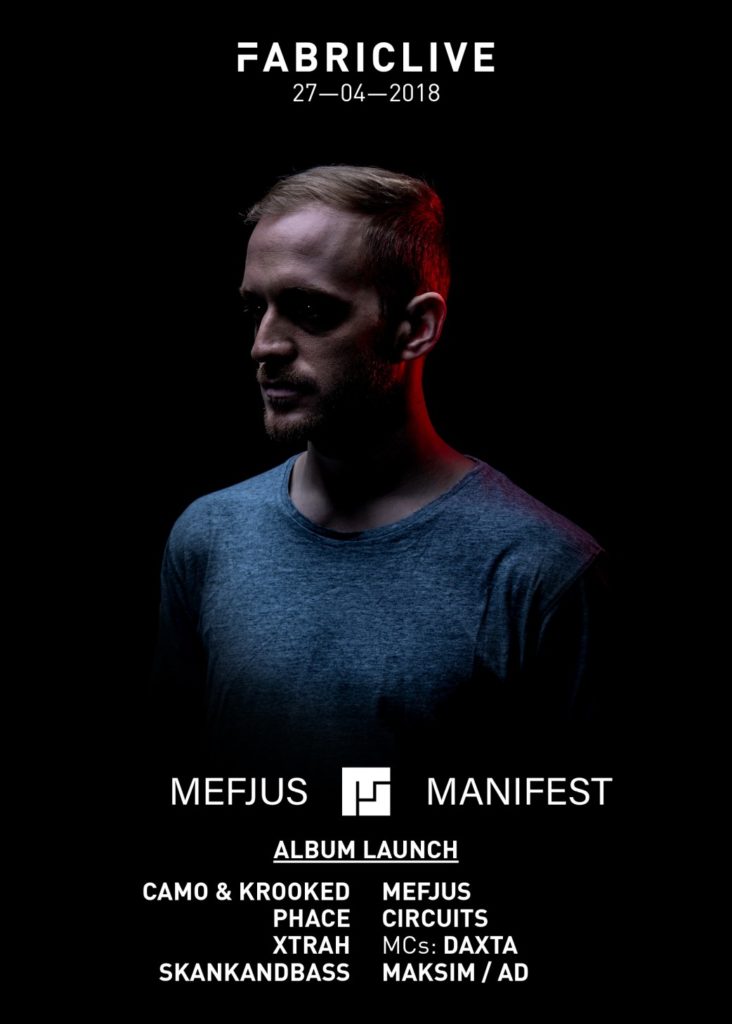 You’ve got a huge tour coming up in Europe and the UK, including an appearance at Fabric Live. Are you excited about being back touring after being in the studio all winter?

I am super excited to tour this album. It’s great to be able to travel the world having a product you can present to people. The Fabric launch is something very special to me. We’ve built a very special relationship with Fabric over the years. I had the honor to play multiple club shows with Critical for them, launch my debut album there, do a Fabriclive mix CD, and now launch my second album there in Room 1. I am very grateful for that. In addition, a lot of my personal but also studio friends will be there. Schnitzel Bros Camo & Krooked with MC Daxta, Phace, Circuits (InsideInfo and Kasra’s new side project), Xtrah and Seb – Skankandbass will be joining me for that show.

Any plans to tour the US on this album?

We’ve had some offers/plans to do another US tour but due to the EU requests we weren’t able to carve out enough time to make a proper US tour happen. I would love to come back though, the 3 tours I did in 2016 were fantastic and I can’t wait to be back!

Manifest by Mefhus is out on Vision Recordings tomorrow, April 26. For all streaming and purchase options, click here. Also check out Mefjus’s website for tour dates and the full story of the album.