Adventure Club, the dynamic duo made up of Montreal natives Leighton James and Christian Srigley, has officially taken the nation by storm; as I’m writing this review, Calling All Heroes Pt. 1 is sitting atop the iTunes Dance Charts above huge names like Krewella, Feed Me, Diplo, Zedd, and even Calvin Harris. There was a lot of hype surrounding their highly-anticipated debut EP, especially considering the incredible success of their remix of “Crave You” by Flight Facilities (aka that one Adventure Club track that even your friends who aren’t into EDM all know), but does it live up to it? Let’s find out, shall we?

Ever since the first time I heard their goosebump-inducing remix of Yuna‘s “Lullabies,” I’ve been dying for Adventure Club to collaborate with the incredibly talented vocalist and that collab is finally here in the form of “Gold.” This track just screams classic Adventure Club aka beautiful melodic dubstep with incredibly passionate female vocals. This distinct style has no doubt helped them get to where they are today and and as a longtime fan it’s reassuring to see that they haven’t abandoned their signature sound. The combination of melodic synths, harmonic chords and expertly spliced samples layered over top of Yuna‘s vocal makes this track worthy of being deemed the spiritual successor to “Lullabies.”

For those of who you aren’t familiar, The Kite String Tangle is the “experimental solo project of alternative electronic artist and producer, Danny Harley” attempting to “seamless[ly] blend ethereal pop through to the darker shades of ambient, electronic music.” If it’s hard to imagine exactly what this style of electronic music might sound like, then one listen through the masterfully crafted “Wonder” should be more then enough to give you a sense of what it’s all about. Typically it’s much harder for male vocals in EDM to make me feel weak in the knees, but when done right they can be just as emotionally raw and powerful as female vocals; Danny Harley‘s vocals, much like Matthew Koma‘s vocals in Zedd‘s hit Spectrum, is a prime example of this phenomenon. The way that the subtle, yet powerful piano and string parts that are intricately woven throughout the track, blend with the hypnotic groove set by the tight drums, spacey snyths, and passionate vocals, makes for one of the most beautiful tracks I’ve heard in recent memory. This song is definitely my favorite off the release besides “Gold.”

This heavy electro-influenced tune shows off a more mid-tempo side of Adventure Club‘s repertoire that I haven’t really seen before and I have to say they pulled it off incredibly well; it still has some inklings of that classic Adventure Club sound, but it’s different enough that it feels incredibly fresh. The vocal work on this track really ties all the little pieces together; Leighton and Christian really have a knack for picking the perfect vocalist for whatever kind of vibes they’re going for with any particular song and this is something that makes them stand out from other producers in the bass music scene.

Lastly we have the most controversial track of the EP, “Thunderclap.” The song starts off with a series of uplifting synths that lead into a blood-pumping buildup with one of the filthiest electro basslines I’ve ever heard before dropping, quite unexpectedly, into your standard big room fare. If you’re a fan of monstrous big room tracks like “Animals” and “Tsunami” that have taken the scene by storm over the past few months, then be sure to add this track to the playlist of big room bangers you’ve been throwing together. However, as someone who isn’t a fan of big room at all, I found this section to be quite underwhelming; especially after that incredibly heavy complextro buildup, it came off as kind of dull or flat to me. Even though I wasn’t a huge fan of this part of the track, I have to say that I’ve got a lot of respect for Adventure Club for not being afraid to go outside their comfort zone, even if it might alienate some of their more hardcore fans; they’re musicians first and foremost and I can’t fault them for experimenting because that’s the only way that music can evolve.

One of the biggest statements that Adventure Club makes with this release is that they refused to be pigeonholed into one genre. While they may arguably be the kings of melodic dubstep, Calling All Heroes Pt. 1 proves that they’re so much more than that! I’ve been following Adventure Club ever since they started uploading tracks to their Soundcloud over two years ago and it’s truly amazing to see how much their sound has evolved and how big of a fan base they’ve captured the hearts of in such a short time. They’ve worked tirelessly to achieve this level of success and they deserve all this recognition more than pretty much everyone else in the scene right now. I’d like to personally congratulate Leighton and Christian for putting together a truly stellar debut release; I can’t wait for more great things to come from two of the most talented producers to ever come out of the maple leaf (and bacon) state. 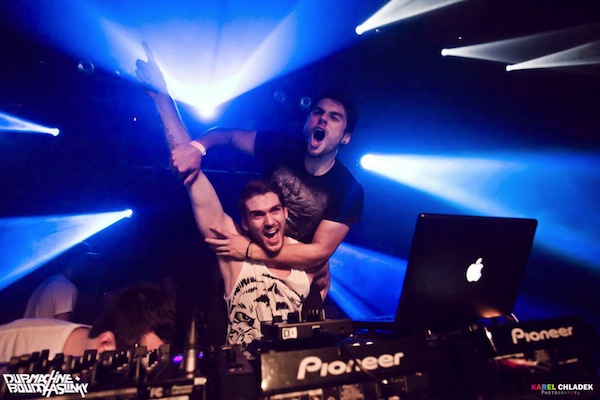 From Villas to $500,000 Dynastie Packages, Tiesto Gives Us A Tour Of Hakkasan