Events under the Life In Color brand are known for being some of the craziest in the EDM scene; star-studded lineups, out of this world production value, cannons blasting paint all over your face, you name it, Life In Color does it and better than the rest! Last year, when Life In Color came through Atlantic City it was on New Year’s Eve; featuring a lineup made up Steve Aoki, Adventure Club, Tommy Trash, and David Solano, it was certainly a night that no one could forget. Well this year, Line Rocket Entertainment is bringing the “World’s Largest Paint Party” back to Atlantic City and even though the show doesn’t fall exactly on New Year’s Eve, I’m sure the incredibly stacked lineup featuring some of the hottest acts in EDM will be more than enough to make up for that!

TJ Rozdilsky has been destroying dance floors for years with his signature blend of house and techno, but lately he’s been crushing the charts as well with an onslaught of energetic electro tunes. His track ‘What’s Up Suckaz,’ which adds a bit of a Melbourne bounce feel to his signature electro sound, was his first to top the Beatport Top 100 and it surely won’t be his last; ‘Ode to Oi’ is another classic track from him. Be prepared for TJR throw down one of the highest energy sets you’ll ever experience!

When people say that Dyro is Hardwell‘s protégé they aren’t kidding around. This bright young Revealed Recordings star has been making a lot of headway in a house scene that has been dominated by a select few names as of late; he debuted at number 30 on the DJ Mag Top 100 this year, higher than any other first timer. Ever since I heard ‘Leprechauns & Unicorns’ for the first time I knew Dyro was onto something and he’s showing no sign of slowing down.

The Krew‘s electrifying high-energy performances have taken the world by storm ever since their performance at Ultra 2013 was live streamed on YouTube. Their ability to seamlessly blend dubstep, electro, and house with catchy pop vocals and hooks have made them a force to be reckoned with at festivals all over the globe. They’ll keep you on your toes with lots of tempo changes so there’s no doubt in my mind that you’ll be absolutely soaked in sweat by the end of their set, no matter how cold it is outside. For a brief look at how insane Krewella‘s sets are at Life In Color check out the latest installment of their web series Krewlife.

There’s no denying how big of a year Swedish House Mafia (SHM) had. With the mainstream success of tracks like ‘Don’t You Worry Child’ and their epic final set together to close out Ultra 2013, few acts can capture the hearts and minds of the crowd during a set the way SHM did. However, just because SHM isn’t touring anymore doesn’t mean you can’t experience the same magic you felt at an SHM show; Sebastian Ingrosso‘s solo sets are surely a worthy alternative. He’ll be sure to drop classic tracks like ‘Calling (Lose My Mind)’ and ‘Reload’ that would drive any crowd into a frenzy. Get ready, because this set will make for an incredibly uplifting end to an already unforgettable night! 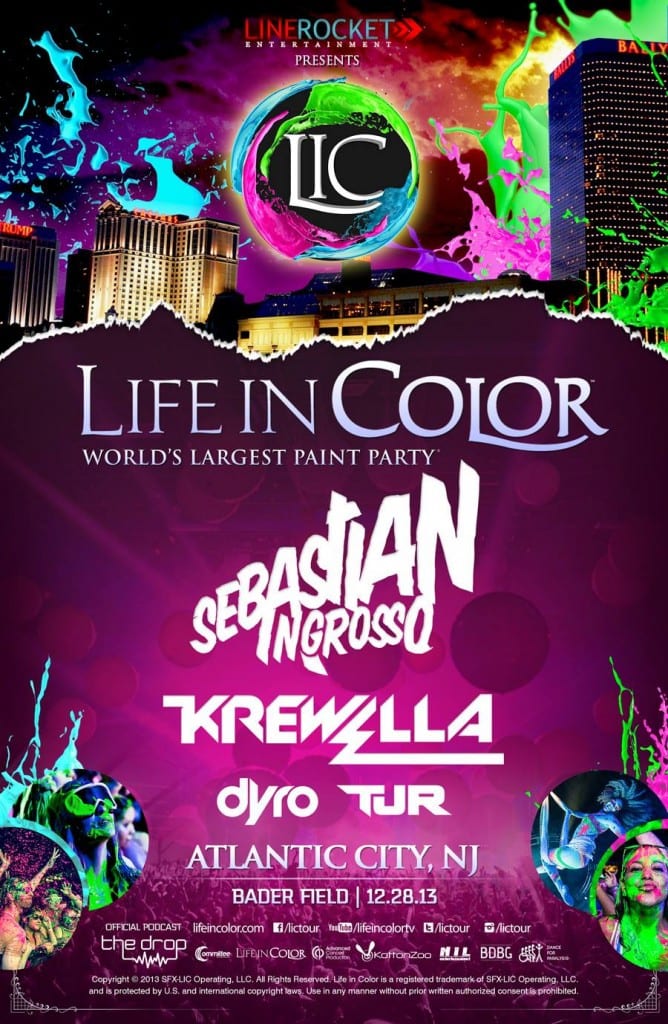