In my opinion, Arizona is coming up in the EDM world. Relentless Beats has teamed up with big promotional companies, such as Insomniac and Global Dance Festival, and they themselves are truly a special group of people. Thank you Relentless Beats, and thank you Arizona. The EDM listeners and dancers, movers and shakers are what will keep us going. You all can expect many great things from Relentless Beats and the teams involved with them this new year.

I arrived at Decandence AZ feeling such good vibes and wonder, as I had not ever attended a NYE event like this before. This night would be a time where memories would be made that I’d carry with me throughout my life. I surveyed my landscape, taking in the amount of people dressed for the occasion. Despite the cold weather, many attendees still arrived wearing the typical rave wear and enormous amounts of kandi. Food was served, and drinks were flowing. The VIP area actually provided a very good view to those who paid the extra amount to be there. Photo areas were set up so you could take photos with your friends, cherishing the moments of the evening before you were ready to dance your hearts out to some amazing tunes. 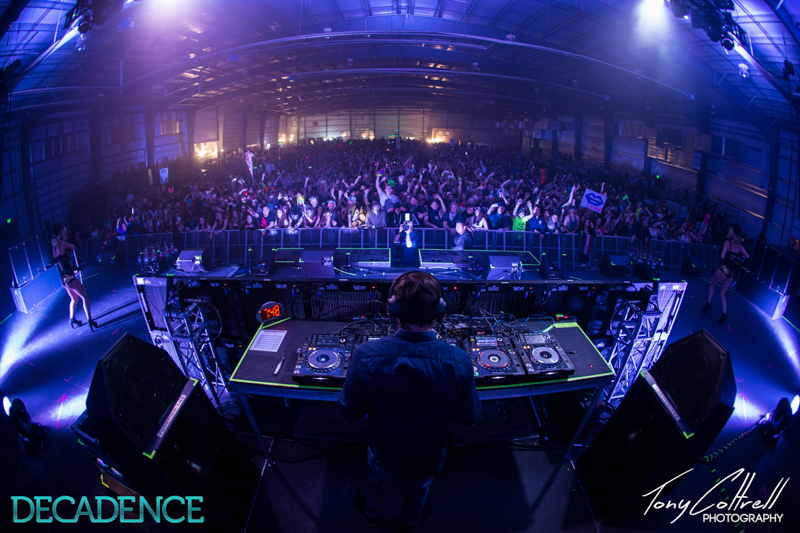 I felt that the event was planned out very well. Although the RB Deep stage had to be canceled due to the weather (as the stage was going to be outside), it will be set up at the Crush 2015 event in February. This stage will consist of local Deep House acts including Rizkee and Bijou, two very incredible people who I had the pleasure of meeting at the event shortly after I arrived. I entered the large building from the cold outside when DJ Tranzit and Lujan were going back to back for an hour and a half. They did an outstanding job as they seamlessly brought in classic tracks and meshed them into the newer hits we’re enjoying today. They really knew how to get the crowd hyped up and ready for the long spectacular night ahead, and everyone truly enjoyed their performance. Shortly after they had finished, Savoy came on and surprised me and most people, as it was a DJ set and not a live performance. Gray Smith rocked the turntables and threw down tracks ranging from electro house to filthy dubstep, and even quite a few of their own works, too. He even played a new remix of “When We Were Young” by Dillon Francis. Although there were no “lazers” this time, Gray promised the crowd the whole gang would be back to Arizona to give them a face-melting show. The fans were impressed, and I am certain many of them there will be anxiously waiting for Savoy’s return. 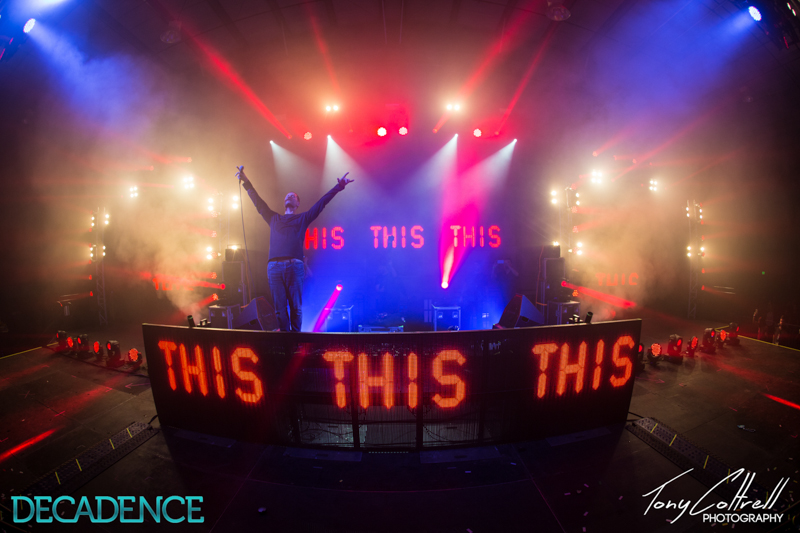 Next up was Kaskade, the man everyone was waiting for. By this time more people had arrived, and everyone was more than ready for him to spread all of his positive vibes. I can imagine many people were beginning to reflect on their years, and wondering what would be next for them in 2015. Watching him as he got started, I knew he was truly an artist, a visionary at what he creates and what he shares with the world. Everyone came together in the crowd, and not one sad face could be seen during his set. He played many of his hits, but his most captivating tracks he included had to be “Last Chance” and “Something Something.” With his talent, he managed to effortlessly mix those tracks to perfection, keeping people on their toes, and surprising them with different drops and transitions. His performance will not be easily forgotten in my mind. At the end of his set, he thanked everyone for coming, and crowd surfed just a bit to see us off before heading out to Decadence in Colorado. He will be making a massive return to Scottsdale in just a few weeks, so if you missed anything you better head to Maya Day and Nightclub on January 31st to catch some of the feels he gave to everyone. 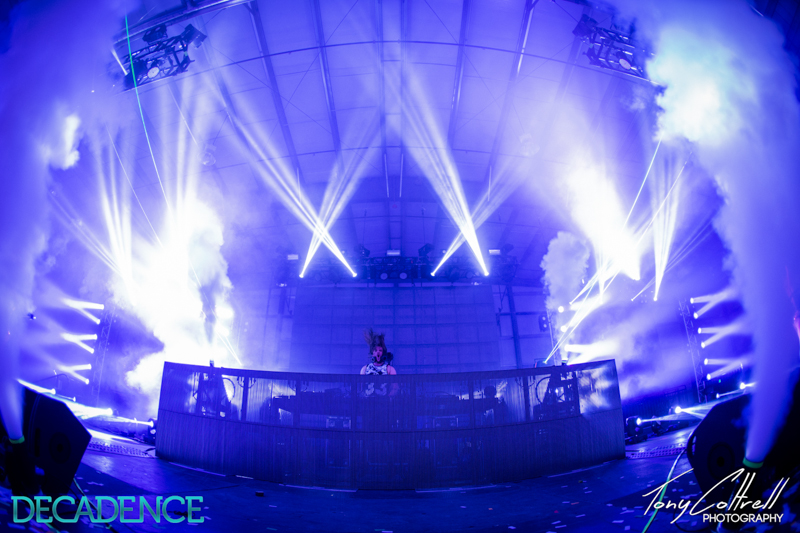 And then the moment I had eagerly been waiting for had finally come… the amazing chance to see Seven Lions again. I have seen him twice before, and both times, there was not a single second where I was unhappy. I’ve been listening to his music for nearly two years, and he was one of the producers who’s music introduced me into this scene. This event in particular was extremely special as I was able to be backstage for the duration of the evening. Seeing him perform and not being in the crowd was very unique, and it was an opportunity of a lifetime. He started off with a bang, capturing the attention of all attendees with his heavy melodic and powerful bass filled tracks. His transition of his remix to “Running to the Sea” by Royksopp into Noisestorm’s “Breakdown VIP” was pure gold. It’s the artists who incorporate tracks they love that always attract me. He played an assortment of his works, including his most recent track “The Fall” that he created with Xilent, and his famous track “Worlds” featuring vocals from the lovely Kerli. The entire set was a huge success, and the way he would come out to the crowd to cheer them on and interact with them was absolutely a blast to watch. Fan interaction is another huge factor of performances for me, and it just goes to show that Seven Lions is truly a master of his craft. He has nowhere to go but above and beyond, into the future of unique and different music. I even had the chance to meet him and his gorgeous wife Emma, and they are extremely fantastic individuals. By far this was my favorite set of the evening, and I will never forget the experience I had. 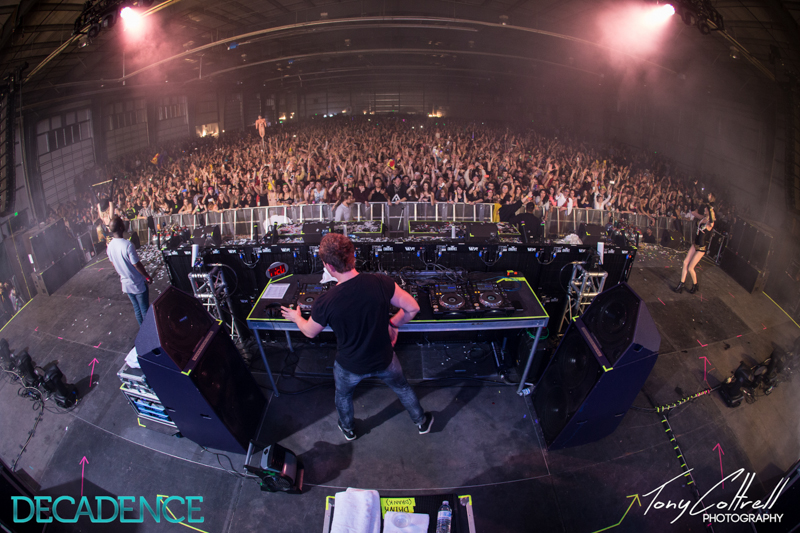 Fedde Le Grande came on next, proving to the crowd he was ready to ring in 2015 with all of us. His primary focus was getting the crowd pumped up and excited, as the new year was starting in only an hour. He played a wide variety of huge club hits and feeling-filled progressive tunes. Many of the people who attended the event commented that he was very on point with his track selection. And once the countdown was over and 2015 had begun, all of the people there were filled with happiness and ready to take on everything their hearts desired. The huge trap duo Flosstradamus came on after that, and I’m not sure if I have to tell you this, but Arizona loves trap. At that point the venue was getting hyped up on so many remixes and originals from them, and they were decked out in their famous logo and bullet proof vests. The energy was high, and these guys clearly knew how to read their fans and what they were looking for. The last time I saw them was Hard Summer 2013, and I must say they truly have grown into something different since then, but they’re headed in the right direction. 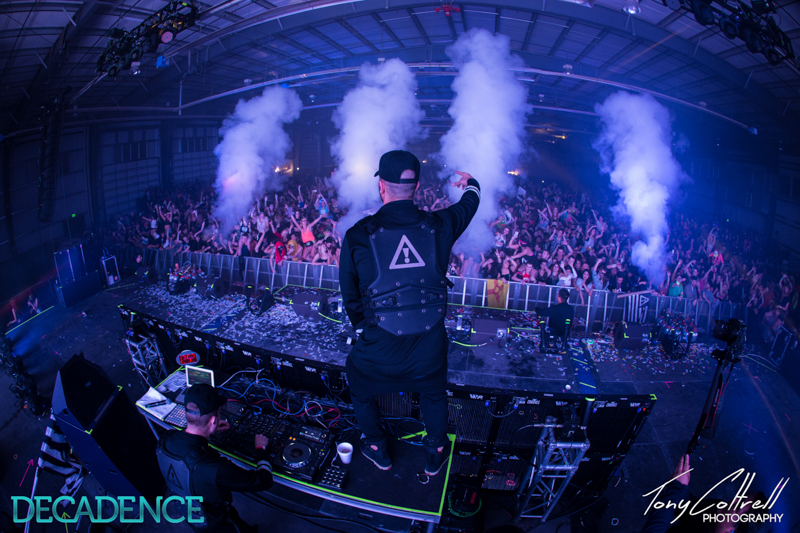 All in all, the first Decadence AZ NYE was a huge success. The music, the friends, the lights, the memories and experiences from 2014, all have made me who I am today. I believe that for New Years, it’s not necessarily about making resolutions, but it’s more of a time of reflection on what you’ve done, how far you’ve come, what kind of person you have turned out to be in this life, and who you believe you are. Be sure to remember not to worry so much about the things you can’t control. Don’t forget to take action on your dreams and goals. It’s okay to be scared of the unknown, but you have to believe in yourself and just do what you love. And don’t beat yourself up too much. After all, we all deserve to give ourselves a little more credit. So go out into this new year, and just be you. A relentless and decadent you.