In the ever-evolving world of electronic music, each genre has a handful of centerfold acts that have pioneered the movement in such a way that many have brashly followed suit. By paving the creative way and decimating every glass ceiling in their path, these said artists continually construct a precedent that directly reflects the extreme hours and tireless passions spent culminating a production so pristine, yet only a few minutes long.

Camo & Krooked for me and many others, embody everything i’ve described above and more. With countless timeless classics such as the hit albums Cross The Line , Above and Beyond and Zeitgeist, the boys have announced their next album entitled Mozaik on the freshly-announced label Mozaik Musik in partnership with the esteemed Ram Records/BMG synergy.

With a brand new single featuring two vocal masterpieces entitled “Good Times/Bad Times,” “Honesty,” and a massive remix for Noisia‘s “The Entangled,” the groundbreaking duo has given their diehard fans a slight taste of what’s to come on the new album.

With all the excitement brewing, we at Your EDM felt more than inclined to have a chat with the boys themselves for an interview.

Hey boys! Quite a pleasure to be sharing a line with some of the most progressive producers and DJ’s in the electronic music scene.

It must feel pretty liberating, being able to fully experiment and expand on your new ideas. Tell us how the transition has been. How does it feel to be able to go and create your own independent ideas and watch them come to life?

Markus Krooked: The whole idea came together quite literally. We didn’t have to force anything at all. All ideas were planned carefully through over a year’s time deciding what to do with our music. We tried to stay unsigned to any label for as long as possible, it felt good. It felt independent. Even though Hospital Records gave us the full freedom of creativity, it still felt right to watch our own plans come to life fully.

The thing is when you make music and you know you are releasing on a certain label, you kind of subconsciously push yourself to make music that fits that specific label, even if you don’t feel like it, you just do it. Subconscious behaviors. So we tried to stay away from that completely and write stuff from the album, that was on its own path.

Ram offered us a really cool deal where we have the full freedom of creativity while helping us build a new label, which we decided to call Mozaik. Of all the time we spent writing the album, it kind of felt like a mosaic in a sense. Sort of broken pieces coming together. In the beginning there were loads of pieces, that just didn’t quite fit yet.

Reini Camo: I think what’s really cool as well with being the head of your own brand and label is you can take care of your schedule 100% on your own. You don’t have to wait on any release schedules. When you think the timing is right, you can just put it out there. We are in full control of promotion and channeling which is very important to us as well, to know we can reach the highest amount of people in release and make it look perfect.

Right. Absolutely. That’s gotta be quite an amazing feeling to have the power to that, and execute it correctly at that.

You’ve both just released “If I Could/Ember” along with “Good Times/Bad Times” and “Honesty.” What else can fans look forward to on the album? Does the rest of the production stay true to the “Camo & Krooked sound or will there be any surprises?

Reini Camo: It is the signature Camo & Krooked sound in a wider range. Most of it is written at a drum and bass tempo, but we really tried to use as many different beat patterns as possible, while staying within those boundaries to be as creative as we can be.

Markus Krooked: We tried to stay as true as possible but at the same time do things that are unexpected. We really tried to write some complex beat patterns. One collaboration in particular is with another great drum and bass artist. “Honesty” will be featured on the album, which actually has myself on vocals with an old classic Camo & Krooked vibe, reminiscent of the “Climax” days. “Honesty” is the most dancefloor-based tune. Another one is called “Passion,” which features a slow triplet drum and bass vibe. We really try to attach a more introverted approach with this album, something more personal.

While on the subject of album features, it seems as though a video clip with a Signal remix of “Black or White” Feat. Tasha Baxter has been making its rounds. Are your considering some sort of remix album?

Reini Camo: We actually had a pre-premiere for the new song itself, and he approached us, asked if he could do a remix which we agreed on. He worked on it for a couple of weeks and came back to us and it was just amazing. We have a couple of other artists already as well. There will be something happening, we just are not sure when or what exactly.

Tell us a bit about your festival Nu Forms in Austria. What sets it apart? There is camping, yes?

Markus Krooked: It is quite different. The overall vibe is different. It feels so much more like a family reunion than any regular festival. A lot of festivals are over-produced. We try to stay away from that. Ours has art installations, food trucks, and an overall bundle that’ll make the whole experience great, while not just making it feel like a sick rave. It’s also next to a forest which is an amazing touch. Of course as well, it’ll have function 1 sound.

Reini Camo: We wanted to make it feel less like a consumer-based festival. Not just about ticket sales.

Markus Krooked: We sell a limited amount of tickets. We could sell more, but we don’t want to. We want everyone to have space to dance and have fun without feeling cluttered. It makes people more eager to come, it doesn’t feel overcrowded so it always feels like a community. We had people from all over the world last year, telling us it was the best festival experience they’ve ever had. You can book a cottage with a VIP camping area. The camping there is just wonderful. We used to go there all the time when we were younger, I started going there when I was 15, so that was my first drum and bass festival experience. Thats what we want to give back to the people.

Austria is so much more relaxed, way more laid back. Really different.

As of now you’ve pretty much only released music from Camo and Krooked on Mozaik Musik, are there any new artists coming in to join the camp? Any new signings on the horizon?

Reini Camo: As the brand is really new, we are really just keeping it on us for the moment. After that, we are not too sure where it’ll take us. For now and the year 2017, it’s gonna be mainly about Camo & Krooked and the remixes, but if there is exciting music and people want to join the movement, I see some future for other artists with us and our label. To us, it’s more important to build the brand first, and then we’ll see where it takes us but we are definitely keen to releasing other peoples’ music. . We are really hoping for all kinds of plans for 2018.

In interviews you’ve said before that the music you make goes off in Austria. They just ‘get it’ there. So are you both no longer making music for the fans specifically, or are you making music that you personally care about, with hopes that it resonates with your fans?

Markus Krooked: I think you shouldn’t even think of that kind of stuff when in the studio, and just make music that connect with you and if it connects with you it will connect with the fans. That quote comes from Grooverider actually. He said that in 2009. Which is actually now thinking about it, a bit outdated. We never really cared of that stuff. Overall this year, the UK adopted a lot more sound from other parts of the world which is great, but again, it should always be about what you resonate with as artists.

Reini Camo: We get our inspirations from international music, I think the music is quite internationally-respected. We have quite a good following in Austria, but that might be because we might know so many people personally. *laughs*

What are your some of your musical influences in the studio? Could be anyone.

Markus Krooked: Tame impala, songwriting wise is a benchmark for me. They are so well thought out, musically, but so simple and weird at the same time. There’s so much happening but its still easy to follow.

Reini Camo: For me,  Jamie XX and Flume are very big influences for me.

Epic choices. I definitely agree that Tame Impala’s songwriting abilities are quite amazing.

Are there any festivals or tours we can look forward to seeing you at?

Markus Krooked: We are coming to the states quite a bit now in the next few months. Two or three little tours starting mid March. It’s going to be great to come back. We start at Beyond Wonderland which was our first festival in the states 5 years ago with a a few more in July. We’ll also be coming back at the end of June for Paradiso festival. We’re also doing a show at the esteemed Red Rocks Amphitheater on support for Zeds Dead. We are really looking forward to it.

Wow! That’ll be a mind-blowing show, no doubt.
Lastly, any final words for your fans at Your EDM?

Camo & Krooked: Thanks for all the support over the years and thanks for following our sound. We are back to the states way more often after a slight break due to finishing the album. We’re both looking forward to seeing all those faces in the crowd. We can’t wait to show them all those broken pieces put together.

“All those broken pieces music.”
“That sounds like music, but broken! And YOU fix it??!”

You can see the legendary duo themselves at a venue near you at one of these dates: 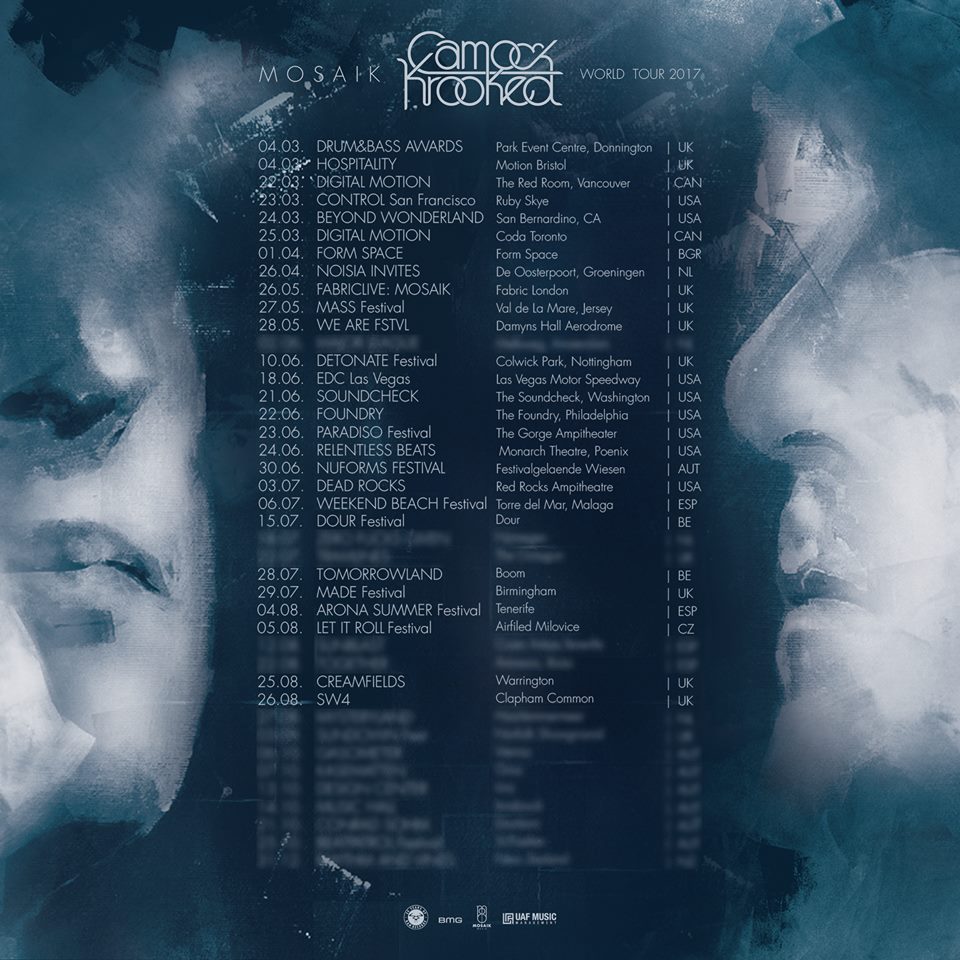