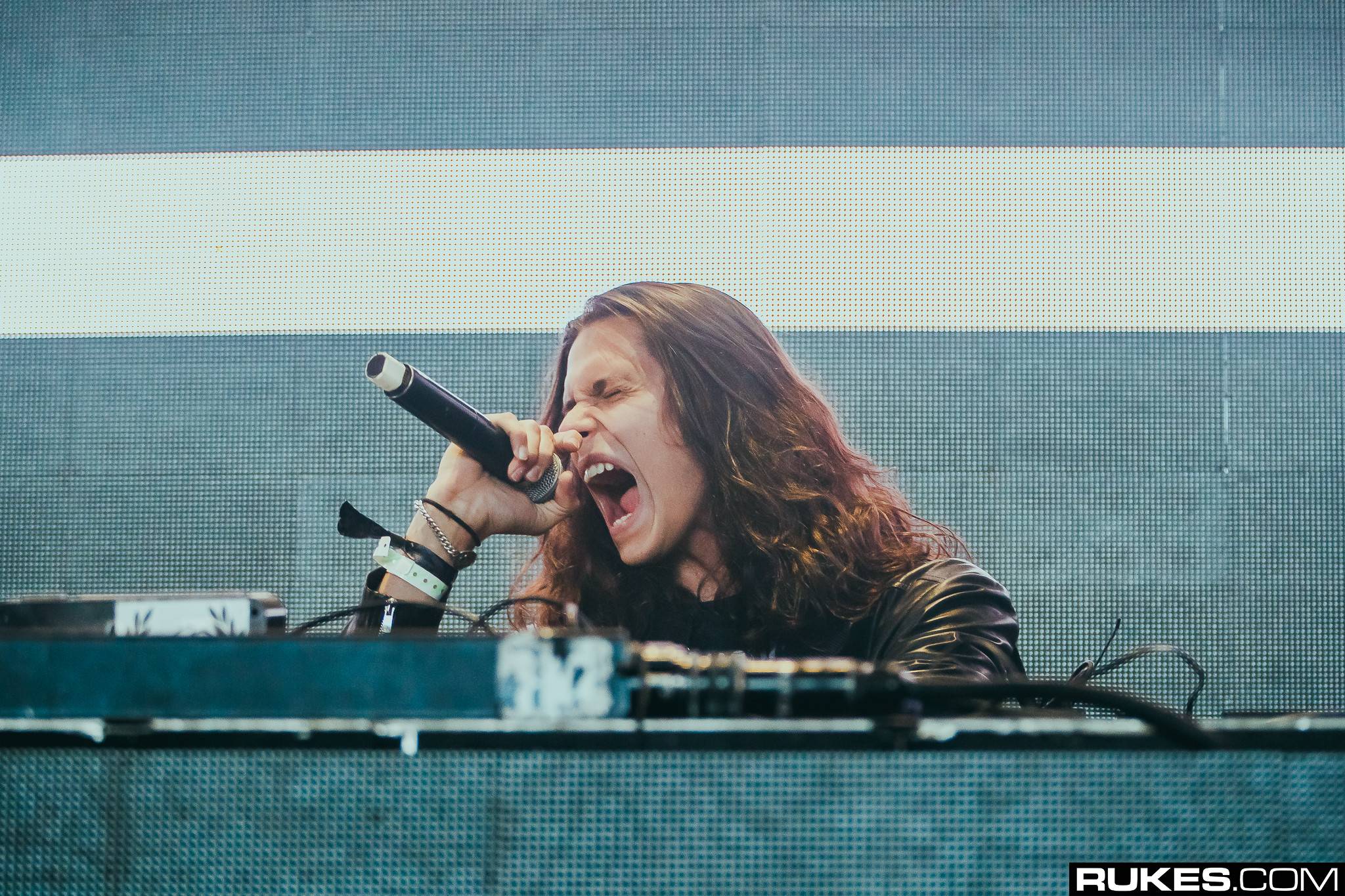 Sullivan King has been bridging the gap between heavy metal music and EDM since his debut in 2014. The instrumentalist/producer creates groundbreaking music that brings the heavy energy of bass music together with the power of classic rock, giving all headbanging fans a run for their money.

Just recently announced, fans across the globe will get to experience the legendary performance first hand. The Fight Back world tour is Sullivan King’s latest project and you can now buy tickets here.

🤘🏼FIGHT BACK WORLD TOUR 2018🤘🏼 tickets available on my profile!

By the end of his debut year, he accumulated over 2.4 million plays worldwide. An impressive number during a time where producers are a dime a dozen. But his unique style is unlike any mainstream electronic music production we’ve heard.

His passion for live music and concert arena vibes can be seen and felt during his performances. He puts on a phenomenal show that pushes the boundaries of your typical EDM set. Incorporating his own vocals and shredding his guitar live, the energy is unmatched.

Watch a recap from Sullivan King’s HARD Summer 2018 set, get excited for the tour and read the full interview below.

I wanted to start with a quick little background about you, how did you begin producing & where did your love for music originate from?

Began producing in 2012 mainly just because I got introduced to dance music by going to rock festivals and there were DJs playing. Like Steve Aoki and what not. I was a big video gamer and EDM was always thrown into videos on YouTube and stuff like that. As far as getting into music, it wasn’t until I started playing guitar that I kind of started to unravel this sort of new world of just not only composing but writing, playing and what goes into making a song. I never really put any thought into that until picking up a guitar one day.

I know you like to blend a lot of different genres, but is there anyone specific that gives you the most motivation? And what do you listen to when you’re not making music?

90% of what I listen to is absolutely metal and rock, or it’s super old stuff from the 60’s and 70’s like Aerosmith or the Rolling Stones. Everything nowadays which would be metal bands like Avenged Sevenfold, Underoath, I See Stars, and Nine Inch Nails that’s easily 85-90 % of what I listen to. I very rarely just sit down and listen to EDM, if I do it’s because someone put out an album and I want to see what it’s about. I think the last electronic record I listened to was the newest What So Not. That’s how I like to keep things fresh for myself instead of getting way too involved with what people are doing in EDM and then having to think, “I got to make something that sounds like this,” or “that sounds really dope what if I do something like that.” It just kind of keeps me in my own lane, which I like.

I have to ask, what’s your favorite sushi in LA?

There’s a couple of them- one is a place by my house called Bluefish, there’s only a couple of them in LA county area and they’re really really good. But then the place I go to a lot for more celebratory stuff is called Takami, which is on the 23rd store top floor of this place on Wilshire in Downtown. It just has a really awesome vibe with great food and drinks, it’s a great place to go out with some friends and stuff. I usually go with my wife and a couple good friends of mine every now and again, we’ll go celebrate just life being cool.

Tell me about HARD summer, you came out with Kill the Snails during their set & played your guitar on stage, how was that?

It was just so surreal. When I was playing it was kind of one of those moments where I was like, “alright I got to go play right now,”  I ran up on stage and it just totally felt like time had just completely stopped. It was the weirdest thing ever being up on stage and playing a show for thousands of kids and being like, “Holy S***, I’m actually here playing Hard Summer.” This is something that I’ve dreamed about playing for so long.

And obviously going up with this Kill the Noise and Snails was such an amazing opportunity that I was given by them, they are such awesome humble guys. It was one of those out of body experience moments, like woah, where everything stopped and it was just amazing… I can’t even put it into words, lets just put it like that.

Not only do you play the guitar but you do a lot of your own vocals. Do you do any vocal training, and how do you not strain your voice when making different screaming sounds?

I don’t know because I just don’t, I don’t really do any training. Over the years I’ve just kind of built up a tolerance to it, which I would say it’s kind of like a muscle in my opinion.  And I could be completely wrong, anybody that’s trying to be a screamer or whatever, do not listen to me because I have no idea. I just kind of have gotten used to how I scream, I know what I do that will hurt my voice and I know what I can just do over and over for an hour and a half and everything will be fine. There are certain things that I’ll do before a show, I won’t be yelling across the stage or doing anything to strain it but for the most part, yeah, no training really and no practice that’s just it.

What was your craziest moment while touring with Black Tiger Sex Machine?

I’m not like a crazy person inside, so it’s kind of hard to say. Everyone’s super dope on that tour but I don’t really party or do anything. I kind of just like, you know, work and sleep. I don’t even remember the tour being that crazy, it’s just one long grind with lots of sleeping when you can and just chilling in the van with homies. So I would say it was a pretty chill tour.

You’ve been working on some new collaborations recently, can you tell me a little about those?

Yeah, I have a lot of collabs and stuff coming up. So there’s a few with Excision, one’s called “Wake Up,” which is a slightly more ballad-like track and it’s something we’re definitely proud of and put a lot of time into. There’s another one called “Fight For The Fame” which is just a straight up basher and mosh pit anthem kind of tune.

Then the one with Grabbitz is “Show Stopper” which we’re in the middle of working on – it’s almost done, it’s just kind of a fun track. We sat down in my living room one day, we had just had an early dinner and I started messing around with this one beat, this weird hip-hop kind of vibe and he was like, “Yo, let me just rap on top of it.” And I was like, alright, go for it. In two minutes he wrote this little verse and hook, threw it on top, and that was it. Just built a song around it and the song was done in a couple hours.

Is there anything else upcoming that fans can get excited about from you?

We’ve got a ton of shows that we’re going to announce really soon. We’re going to be hitting a lot of different places in a lot of different countries, so there’s going to be a lot of overseas stuff which I’m really excited for. Musically, I’ve just been stockpiling what I consider to be my best work and stuff that I’ve been playing out that’s getting the best crowd reactions I’ve ever seen with my kind of songs. So between that, the collaborations, the Excision songs, Lost Lands coming up, and new merch. Pretty much just everything I get hit up about, we got coming.

Lastly, is there anything you’d like to say to readers?

Well, a big thank you to my favorite blog of all time, Your EDM of course. Thank you to you and to everybody on the team, and everybody that has always supported me. A big thank you to the fans obviously for supporting me and helping me get bigger as time goes on instead of just sitting in my lonesome making music on a laptop, and making that turn into a big ole’ dream.

Check out the Fight Back tour teaser below & get your ticket now.

FIGHT BACK WORLD TOUR 2018.GET YOUR TICKETS NOW🤘🏼http://smarturl.it/sk_fightbacktour