At first, the idea of witnessing an artist perform on a massive stage fortified with paint cannons that spurt neon paint more than thirty feet into the crowd sounded like an enjoyably unique experience which I had yet to witness at a live event. However, after multiple days of my hair smelling like paint and a walk of shame like I’ve never experienced before, I have to say Life In Color :: Rebirth was not the type of party I expected.

After arriving early to the event I was immediately impressed by the size and spectacle of the venue. Hosted at the University of Colorado’s Balch Fieldhouse, the Life In Color stage and entire set up was extravagant and extremely well put together. After a quick walkthrough, hoards of eager concert-goers clad in almost solid white had already begun to line up outside the venue and minutes after the doors were open the dance floor was sufficiently filled.

As the show began, openers Jimmy Burns and TYR slowly began to build the energy levels as masses of attendees continued to storm past the Argus security guards. After finishing their respective sets, the audience, now officially warmed up, was in for the biggest treat of the evening. To my dismay, a few hours before the show I was informed that Seven Lions‘ plane had been delayed indefinitely and that he would not be performing. In lieu of this cancelation, fellow openers, Basscrooks, played an extended set before Borgore which in my opinion proved to be the highlight of the entire event. Basscrook‘s set was energetic, expertly constructed and kept the entire crowd dancing from start to finish. The Denver-based duo had big shoes to fill with the absence of Seven Lions and man did they deliver. After a solid set that consistently had the sold out crowd in a frenzy, the time had finally come for my least favorite portion of the night. 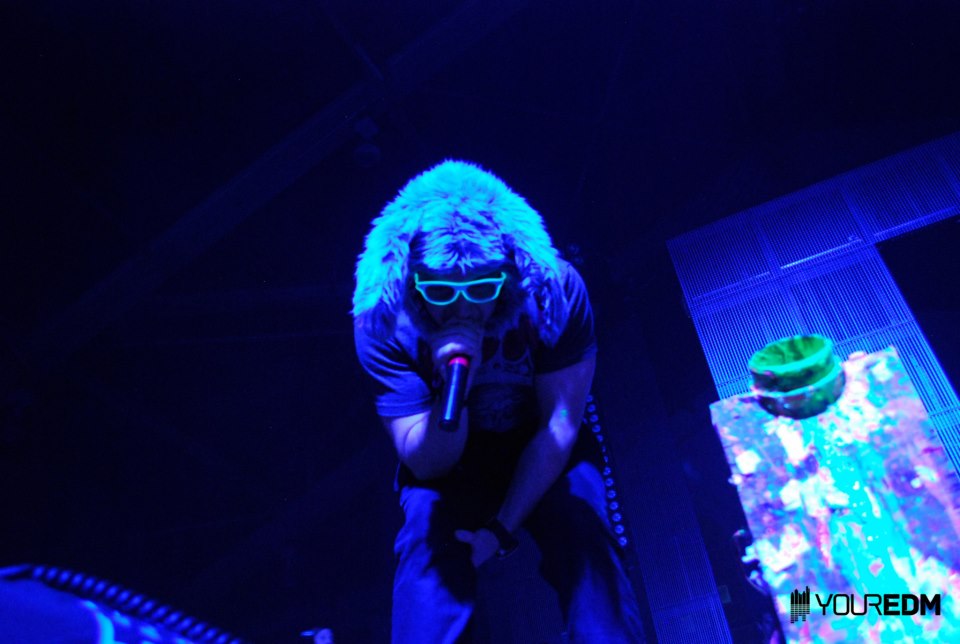 As the clock stuck 12:30, Israeli artist Asaf Boregore, better known as Borgore, took the stage behind a large ice cream truck of LEDs and just like clock work the bane of my evening descended from the sky, neon paint. I made the poor decision to move down to the floor during Borgore‘s set and was immediately greeted by eating a face full of pink neon paint. At first, it didn’t really bother me, I wiped the paint from my face and thought to myself “Hey, this isn’t so bad” but boy was I wrong. From then on, the paint surged from cannons, firehoses and squirt guns directly onto the packed dance floor. The audience, myself included, didn’t stand a chance. My fear of the neon water-based projectiles had me dodging back and forth and sulking in the outskirts of the dance floor which eventually even proved to be futile. I could not avoid the stuff and eventually I succumbed to defeat and simply sat still to further analyze Borgore‘s set. Overall, his selections were diverse but it seemed apparent to me that something was missing. Very few of his selections seemed to resonate with the crowd and the almost incessant moments where Borgore would cut the sound to scream at the crowd eventually created a disconnect between artist and audience. Whether asking the crowd to create a mosh pit or encouraging girls to test their luck jumping past security to rush the stage, his entire performance left something to be desired. 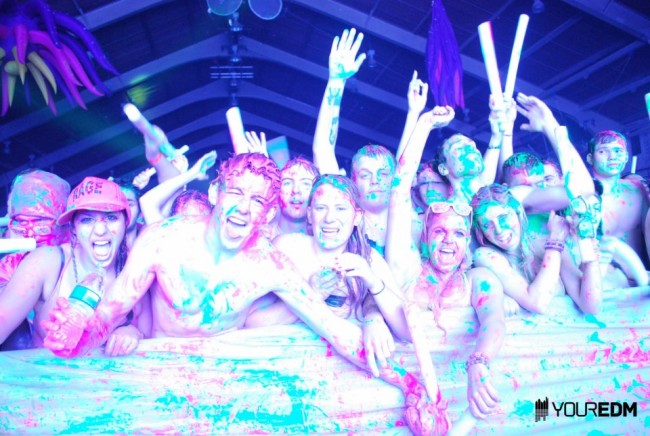 Now officially drenched in paint and feeling overwhelming defeated, I gathered my things and prepared to re-enter the real world trying to appear like I didn’t just spend the evening at a paint-flinging rave. All in all, I felt like the event was a strong showing for my home state of Colorado. The CU Program Council did an excellent job setting up and running the event while the Denver duo Basscrooks stole the show.

And if you haven’t already make sure to check out more of our photos from the event here!