Update: Havirest released a ‘statement’ from his Facebook saying that he intended to point out the lack of security/safeguards present in online distributors’ platforms that prevent the theft of creative property. Havirest‘s Facebook has since been deactivated with the ‘culprit’ claiming that he has many names and is ‘everywhere’, subtlety signing off as Tom Leans UK. 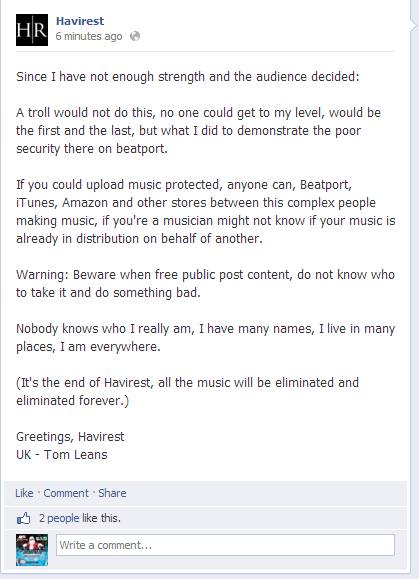 While I believe this might be a last ditch effort at saving face, Havirest makes a small point. Was Havirest‘s theft of songs to call attention to song theft a bad effort made in poor taste or an honest attempt to bring attention to a touchy subject? Let us know your thoughts. You can still check out the events that transpired below…

When the finger gets pointed at an act in the EDM world over ‘copying’ another artist’s material, the accusation lies in melodic and compositional similarity and imitation. However, very rarely is it the case that a piece of work is outright stolen and distributed. Sadly, in the latest case of copycatting, the latter is true.

Super mega-nobody, Havirest has managed to get his so called ‘Stories & Myths‘ EP distributed to iTunes. However this EP is not Havirest‘s in any way shape or form. In fact the uploaded material is Asa and KOAN Sounds latest EP, Sanctuary. Additionally the little punk managed to sneak a copy of SKisM‘s Experts under the radar, rebranded as The Slenderman.

We here at Your EDM absolutely condemn the theft of creative property and hope that Havirest gets the legal (and potentially other forms of) beat down he deserves. Supposedly Havirest has some sort of plan behind this absolute idiocy, but as you can see below SKisM isn’t buying it. I’m also willing to be Sub Focus or Schoolboy won’t be on board either… 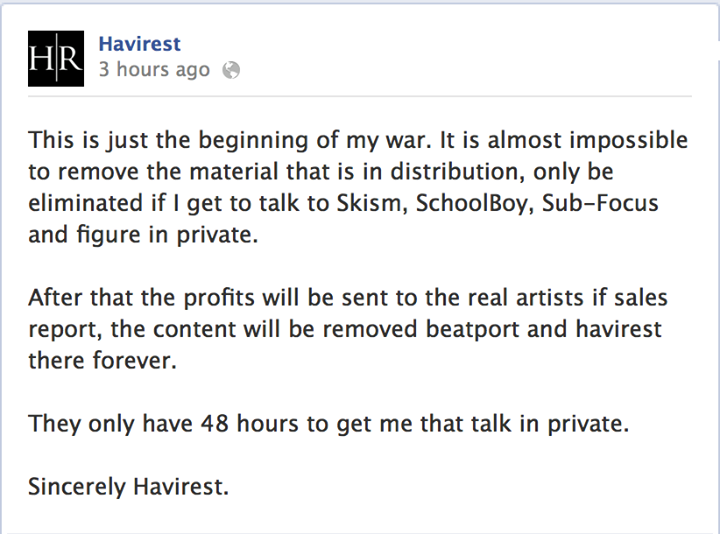 Unless this is a gigantic troll whoever this Havirest fellow may be, is about to be in a world of hurt. I would advise playing freeze tag in traffic before I would suggest following Havirest‘s lead and ripping off those with true talent. I for one cannot help but hope for some serious justice.