Colorado natives SAVOY don’t care much for trends. They put out a wide variety of music and they release most of them in EP/album projects instead of singles, which is the case for almost everyone else. Their latest album, named Self Predator, consists of 15 solid musical works that just might be their best yet. This could easily be one of the best albums out this year; the unique sound expressed throughout it’s entirety is astonishing. So let’s delve into these tracks and see what you think.

I love when an album starts off with an “Intro” which is just the case with Self Predator. Just as much work was put into the moombah-like tune as the others to get things going in the right direction. “Mind Over Matter” is some more midtempo, with a dark vibe that transcends most of the album. Next comes one of my favorite tracks off the project in “Five Stars.” The dirty disco feel reminds me of Gesaffelstein who influenced the trio’s work. Everything about this one is on point. The fourth track “Bizzy” is a trap/dubstep hybrid that brings a whole lot of bass. It makes for a nice break from the mid-range of the bpm spectrum. Another favorite of mine is the collaboration with LoBounce on “Cata” for another dark banger. I know at my next gig I will be dropping this for sure!

Number six on the album is “Perfect World” which continues with the heavy french electro style. The next track sounds like it should be in a movie (honestly most of these tracks do), but this would serve as a bangin’ intro with that catchy synth line. Another break from midtempo comes with “I’m In Need (MVP)” for a massive dubstep tune that exemplifies the trio’s amazing sound design abilities. “Back To Life” returns you to the groove and I love the fact that this one has no real “drop”; it’s just a killer record. I can’t get the tenth track out of my head because of the eerie, yet aggressive qualities it possesses. “UGH” will have you saying that very word.

Almost done. Track eleven, “R&R”, is one of the most heavily disco influenced tracks on the album, which is partly why it’s in my top list. “So Bad” features vocalist Heather Bright (Bright Lights), whom the trio have worked with before. More perfection is all I have to say for this partnership. Their live shows must go off the hook when these guys play “Guesswork” due the the sensational bassline coupled with the alarm-sounding synth. It’s not crazy energetic; just epic. “Prey For New York” is an ominous midtempo record that will have you on your knee’s with your hands grasped together and eyes closed. You will probably be praying for more. That prayer just may be answered with the last track, which is another collaboration with LoBounce. “Nothing Stays The Same” shows us the fact that change is continuous; the song has a slightly different feel than the rest. To me, it shows the fact that SAVOY will always continue to grow and develop their skills and their sound.

That is all for the music folks. However, if you want to hear these guys live, SAVOY is starting their Get Lazer’d Tour tomorrow. Dates can be found below on the tour poster and tickets can be purchased via the link. Don’t forget to grab the album for free if you haven’t already! 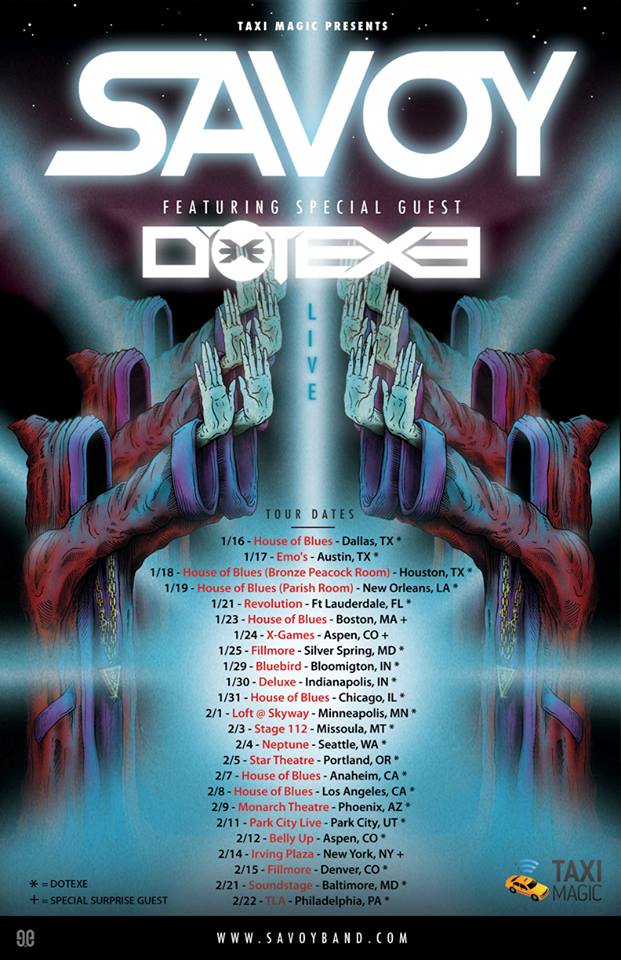