The Glitch Mob‘s long awaited sophomore effort “Love Death and Immortality” is finally here. An inspiration to the entire electronic music world, and myself particularly, TGM describes this most recent masterpiece as extroverted in comparison to their freshman album release “Drink The Sea.” Right from the start, it is obvious that Ooah, edIT, and Boreta‘s description was entirely accurate. Enjoy each track and their accompanying unique videos below featuring trippy visual production and recurring Glitch Mob elements that only add to the story that is “Love Death and Immortality.”

The opening track of “Love Death and Immortality” starts the album off with intensity, heavy bass, and absolute fire melodies. With the well-known and loved TGM synthesis and crazy stereo panning, intricate tribal-esque percussion work, and complex song structure, it is easy to tell that the trio is back in all of it’s glory. With a quick whine-down to finish, the procession from track-to-track is already seamless and the mood flows just as perfectly as we have come to expect.

A slow-down from the intensity of “Mind Of A Beast,” “Our Demons” strikes an emotional chord with trance-like vocals from Aja Volkman. This track is, simply put, a revenge record. With the metaphor of the victim as “queen bee keeper,” not only is the production excellent, but the song-writing is as well despite only containing two simple verses. It flows, it envelops you, and the unique kick patterns and expertly crafted synths go above-and-beyond to satisfy every audiophile. TGM’s continued use of a variety of vocalists who use a plethora of styles only increases the impressiveness of their collective work, with the only thing that excites more being what they have in store for the next track in this already fantastic album.

With a tearing bass-line and intriguing high synth, “Skullclub” is sure to delight the bassheads who get their hands on this compilation. Barely understandable vocal samples combine with a mysterious reverberating breakdown to create an altogether unique vibe on this, their third track of ten. We are the wild ones, indeed. This track is laced with all of the creativity of the trio; simple piano melodies, dark synths, and beautifully crafted rises lend this one the term “masterpiece.”

A quick glance at the short amount of lyrics in this, number four, should not deceive you. Metal Mother contributes absolutely perfect dark, romantic vocals. The muffled kicks and subtle laser stabs that hit broadside round out this heavily emotional track from TGM. With glitch-infused epic vibes and a resounding word choice, the intelligence of the trio and Metal Mother is apparent. Becoming harmonious, sensory confluence; these lyrics only build excitement for what The Glitch Mob will put together for their album tour.

The fifth and early released track from The Mob is already well loved and helps return the mood of this album to a heavier, more instrumental vibe. Featuring a gritty bass synth and light, delicate melody play over top, the work put into this individual track is incredible. With stuttering glitch synths and heavy tribal-drum influence, this is what bass-heads and glitch-heads alike can agree is pure artistry. Expertly place white-noise and creatively placed samples round out this record as a blogger’s wet-dream. Now the only question is, where can it go from here? 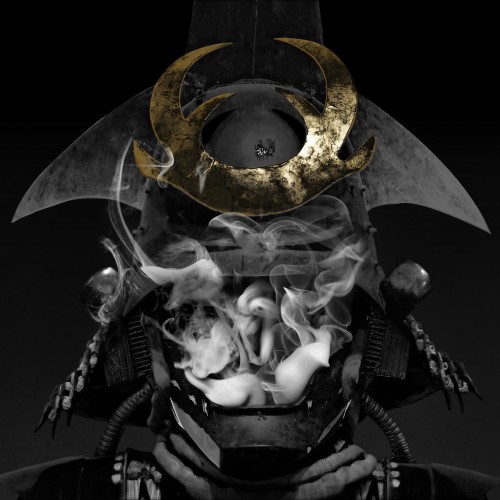 Aja Volman makes a return feature in this sixth record with a vocal stream over unadulterated, funkified glitch. An unexpected, however pleasantly surprising, style from The Glitch Mob; from the first listen I was already in love with this track. At this point in the album, this dance track is in impeccable placement. “Ooh, I wanna dance like that.” Don’t we all? If this doesn’t get you to boogie, I don’t know what will. Bringing back a disco vibe in accordance with a dirty bass-line, TGM really kills it in “I Need My Memory Back.” Take out your dancing shoes and get ready for what’s next in this lineup of top-notch tracks.

Upbeat freak-out music, that is really the only way to describe it. This seventh chapter of the “Love Death and Immortality” journey absolutely astounds. At over six minutes long, and with a countdown in the beginning (which this track absolutely deserves), strap on your seat-belts and get ready for a ride. Extravagant and sporadic over-laid synths abound in this trippy and robust journey. The quick percussion and rapid melody bring an energy that was seemingly bereft of The Glitch Mob previously. “Skytoucher” is the absolute magnificent title of this record and it really does lift you up to heights seemingly unreachable. TGM lays down a bass melody at the end that leaves you feeling mentally enlightened and physically exhilarated leading into the eighth track.

Leading into these eerily beautiful vocals is a pounding drum-beat and unparalleled introduction synth-line. Inviting you to take this majestic midnight journey Yaarrohs vocals play off of TGM’s pulsing pattern of kicks and glitch inserts amazingly. Brilliant song structure and a steady flow maintain the dance vibe produced by “Skytoucher,” but descend again into a darker mood and stranger vibe. With only two tracks left, I’m curious as to where the trio could possibly be taking us next on this already roller-coaster of an adventure.

As the title implies, The Glitch Mob plan to take this party to the early morn. With indescribable vocal samples and an uplifting structure, the ninth track is highlighted by a unique and awesomely synthesized harpischord-esque sound and intricate melody that gradually grows in distortion to meld into a magical rise and spectacular stutter drop. Closing with a drum-heavy breakdown and the sounds of a distant storm, the logical progression is a bright, uplifting, and epic track featuring the angelic vocals of Sister Crayon.

The fantastic finale to “Love Death and Immortality,” “Beauty Of The Unhidden Heart” is simply splendid. Upbeat and with the obvious delight of Ooah, edIT, and Boreta unveiling themselves and their inner-most emotions through their artistic productions, this is my favorite track of the album. Expertly manipulated vocals and a soft, epic synth is only beautified by over-laid harp melodies that create a mystical and dreamy vibe. The trance feel and Glitch Mob sound meld perfectly to create a wondrous conclusion to an illustrious story. Just when you think it’s over, TGM bring back a heavily emotional last hurrah that only leaves you yearning for more. 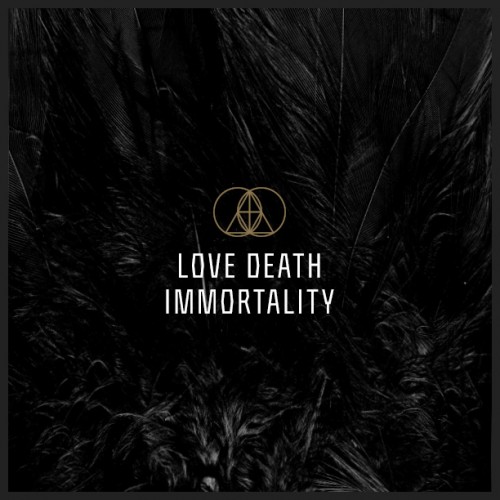 In closing, this album has been nothing short of “well-worth-the-wait.” An adventure in itself, The Glitch Mob has crafted what is sure to be an even more appreciated album then their freshman effort “Drink The Sea.” The sheer variety they have shown in these ten tracks is astounding. With a seamless transition of moods and a perfectly assembled playlist, it is no wonder that these three producers are considered some of the most talented artists on the scene. With this enormous release, I can barely contain my excitement for their album tour. Be sure to pick up the digital, CD, and vinyl copy of “Love Death and Immortality” as well as all of your fan gear here. The prices are amazing and you won’t regret supporting these incredibly talented, and forever grateful, artisans of their craft. Also, be sure to check the listed tour dates to see TGM in a city near you; the live show for their “Drink The Sea” tour was amazing and this promises to be even more well produced. Follow Ooah, edIT, and Boreta on Twitter to keep up with each individual member and be sure to express your gratitude for their hard work and dedication through the years to bring you this masterpiece.

Personally, I would like to thank The Glitch Mob, for without them I would not be where I am today. In good times and bad, their music has served as an inspiration to me. Their relationship with their fans has helped impress upon me the morals I stand by in regards to musicianship. The purity of the expression that they are able to transmit through their music and the roles they play in the musical community have served to better all of us and for that I am eternally grateful. Keep doing what you do, guys, and I’ll see you on tour! 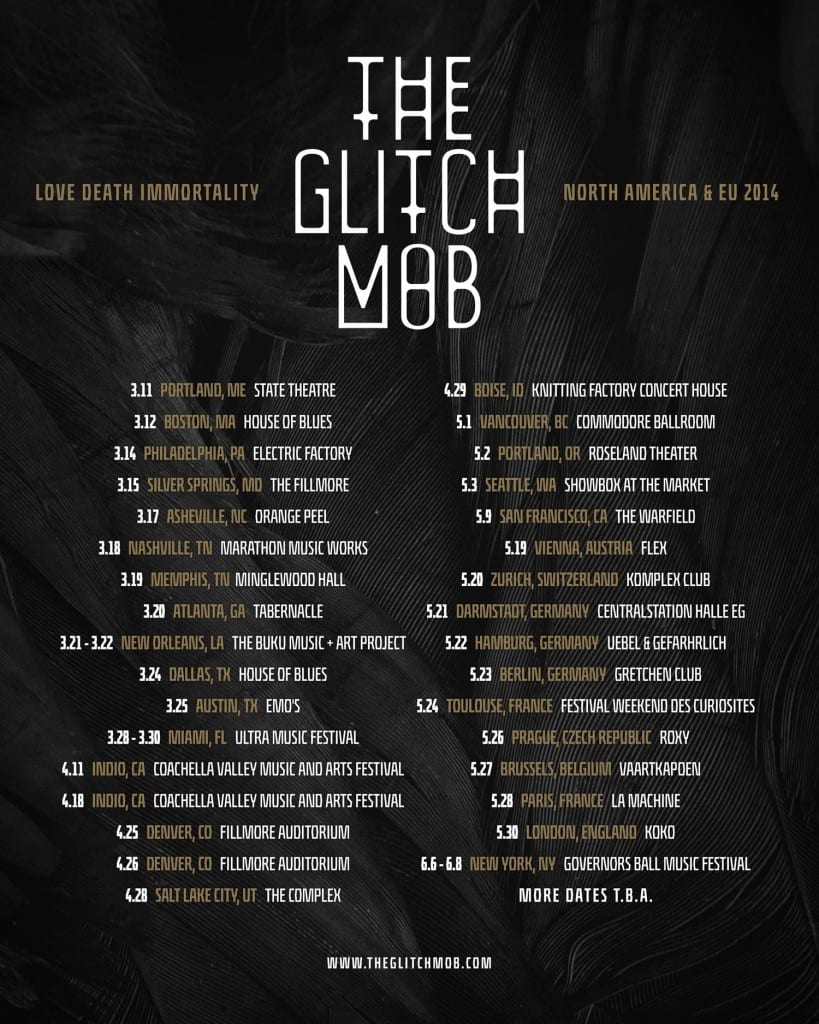