A Musical Map Of The US: The Real Deal

A couple of days ago, we reported on a musical map that showed how individual states listened to music proportionally more frequently in a particular state than in all of the country. The map showed a great deal of variety that makes a writer proud – and a little skeptical. The fact that not one Top 40 artist appeared in any state was a little suspicious and, indeed, the company behind the map came out and revealed the actual map.

The Echo Nest and “data nerd” Paul Lamere said essentially the same in a blog post the other day. For the real map, look below. 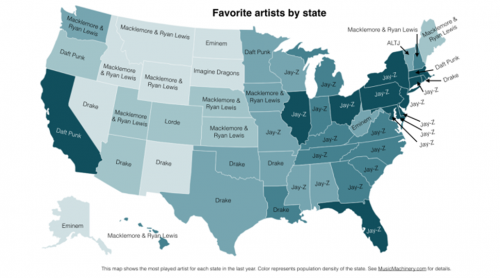 This new map reveals that the real heavy-hitters are none other than Rap/Hip-Hop heavyweights, Jay-Z coming in first, Drake taking second, and Macklemore & Ryan Lewis coming in third. I’m personally not a fan of Drake, at all. But in consolation, Daft Punk managed to score four states. Interesting that California once again went with an EDM artist.

Moral of the story – statistics aren’t bad unless they’re used incorrectly. Be sure to check your data, kiddies.