Man Falls Through Roof At DJ Snake Show In Orlando

At a DJ Snake show in Orlando last night, it seems that a man, who was crawling through the rafters above the crowd, fell 17 feet down to the ground when some ceiling tiles gave way. Reports state that he broke at least one of his legs, if not both, and was taken to the hospital. Shortly after, police arrived at the scene and the show was shut down at 1:30am.

There is no word on whether this man will face any charges. 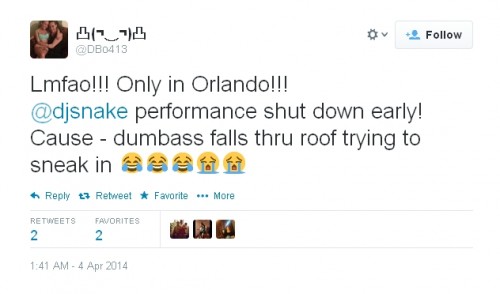 A tweet from Kennedy Jones, who was also in attendance, says he ended up being maced by the police.

I just got maced by Orlando PD for standing somewhere. #TurnDownForMace #FuckTheseCops