The third and undoubtedly most epic day of one of the world’s largest, real life, fairy-tales-do-come-true parties marks the triumphant debut of Liquified ATL’s hometown showcase stage; paying homage to some of the game’s hottest producers from Hotlanta. This isn’t one of those “Oh ok, we’ll let this guy play because it’s his home turf just to be nice” kinds of stages, this is a line up of artists heard around the country coming together to boast the amazing music the south has brought the world. From 2pm to midnight Tomorrowworld’s Icon stage will host some of the most exciting names in EDM and show off all the talent the trap capitol of the world has bestowed upon the masses. Le Castle Vania, Mayhem, Heroes x Villains, MUST DIE!, Popeska, Mantis and more will take over Sunday’s line up as they proudly show people from over 72 different countries the kind of production prowess that was born and bred just outside the grounds of Bouckaert Farm.

I am especially excited to see Heroes x Villains throw down to a crowd of rowdy trap music lovers. Touting they are “only interested in making music you can fight or strip to”, the pair of ATL natives toured with bass music production powerhouse Datsik, got signed to Ultra Records for 2 future albums and hit the summer pavement with their feet running and haven’t slowed down since. Playing nothing but bigger and bigger stages at the country’s best music festivals, Daniel Disaster and Pete Heartless are on the path to greatness.

Their latest EP +CHAPEL+ was much more than a 5 track original production compilation, it was an audio/visual art installation and lifestyle fashion brand introduction. As enthusiasts perused the amazing trapstyle clothing in Atlanta’s famous MJQ Concourse, they were entertained with dark, heavy, ballsy bass music that perfectly set the tone for the entire installation to come together. Though it differed from what we’re used to expecting from the masters of trap, it was perfect for the night they curated and an excellent showcase of their new musical direction. +CHAPEL+’s purpose is to create a neo-modern take on the value-relation of products and mans relationship to products. The installation was comprised of a light installation created in collaboration with visual effects studio Goma, an original score and performance by HxV and fashion products by ATL’s Fresh.i.Am who’s clothing is also seen on other notable music figures from the area like rap trio Migos.

Don’t miss HxV and all of the other great artists on Tomorrowworld’s Icon stage–the one with the water (where Ferry Corsten totally killed it last year) that looks like the Tomorrowworld logo from an aerial view:

And where you’re bound to hear some of the best trap music you’ll hear all weekend. Mark my words–you haven’t been to a trap show until you’ve been to one in Atlanta. Native producers playing their city’s favorite beats to their hometown crowd is the kind of experience every trap music lover must immerse themself in. Check out the entire day’s schedule and some of Heroes x Villains hottest tunes to get you psyched for the madness to come!

Buy your ticket at The Official Tomorrowworld Ambassador Ticket Shop using promo code “Sydney” for tickets that are the same price plus come with a free gift bag. 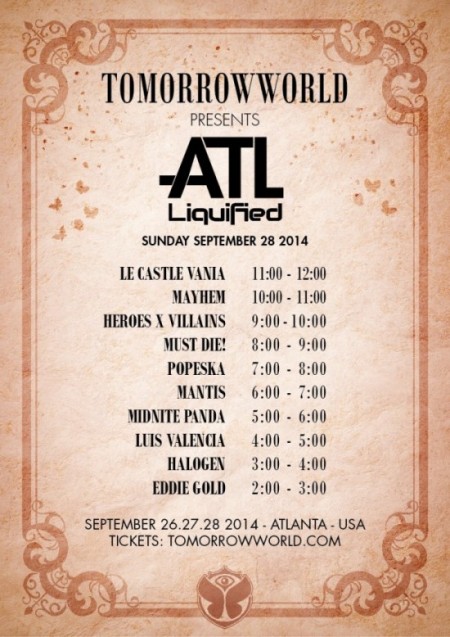