DJ Mag Tries to Make Sense of Their Own Top 100

There are typically two reactions that stem from the DJ Mag Top 100 DJs Poll: 1) “My guy made it to number one!” and 2) “This is absolute garbage.” Anyone with a kindergarten education knows that there is no accurate way to rank the talent and popularity of DJs, so one must read the poll knowing that it is a simple novelty. Regardless, there will be those that take this way too seriously and attempt to put some qualification on the rankings. First to bite is DJ Mag themselves as they released a detailed analysis on the poll, which effectively tells us nothing about DJ culture.

Club-land worldwide has spoken once again. The votes for the Top 100 DJs Poll 2014 — more than 900,000 this year — have been counted and verified, and Hardwell has been voted the world’s No.1 DJ.

A quarter of the Top 100 DJs are different to last year, showing what a fast-moving international scene we’re all involved with. There are 24 new entries and one re-entry (the evergreen Boy George), and altogether 30,000 different DJs were voted for. Votes came in from practically every country on Earth — including places like Christmas Island and Lesotho — and the most votes came from the USA, followed by Holland, the UK and Brazil. Latin America was the area that had the biggest increased vote.

The Dutch dominance in the poll continues. It’s a Lowlands clean sweep in the top five, with four Dutchmen and one Belgian pairing — more of whom in a minute. An incredible ten of the top 20 DJs are Dutch, and virtually half of the top 40. All in all, 30 of the top 100 DJs are from Holland — testimony to the strength of the Dutch scene, and probably the support the electronic music artform gets from the government in the Netherlands.

No other country hits double figures in terms of representatives in the Top 100. The USA, Belgium, Germany, Italy and the UK all have a handful of DJs in the 100 — quite a different scenario to when the Top 100 poll first started.  In the very first Top 100 polls in the mid-’90s, before dance muisc became so international, nearly all of the DJs in the poll were from the UK (DJ Mag is a UK mag, after all). The Top 100 DJs poll actually started as an editorial feature in the mag before growing organically into the monstrous beast it is today.

You can check out the full breakdown of the polling system that lead to Hardwell, Martin Garrix and others topping the ranking by heading over to DJ Mag here and we would love to hear about your take on the poll in the comments. 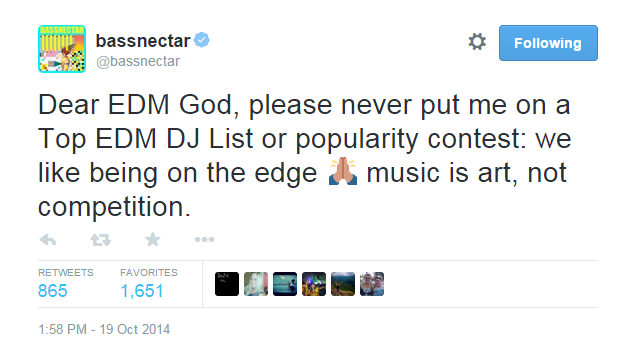 How TomorrowWorld Showed Us the Best EDM Has to Offer

How TomorrowWorld Showed Us the Best EDM Has to Offer