The Real Reason Why We Share Deadmau5, Diplo & Skrillex Articles

Human beings have this odd tendency where their actions and voices don’t necessarily match their inner thoughts. There have been numerous psychological experiments run to test hypotheses regarding inner vs outer needs, or in other words, what you say you want isn’t what you really want. Hiding your intentions and desires from the outside world is quite easy these days, considering that the average young adult spends more than 9 hours a day behind a screen without any real face time.[1] However, the one thing that is so absurdly difficult to hide your intentions from is statistics. Math doesn’t lie. The numbers can be spun and manipulated to reflect whatever you’d like, but the raw data is infallible. Thankfully, Facebook has some pretty good data gathering when it comes to keeping track of a page as large as Your EDM.

We often write about Skrillex, Calvin Harris, Flume, Kygo and other large and rising stars. Why is that? Part of it is, in the case of Flume and Kygo, because their publicists are great at keeping them visible and relevant. In the case of Skrillex and Harris, their established fame and notoriety is a wave they’ve been riding for years that doesn’t look like it will break anytime soon. The other part of it is this – you like to click on those links. Whether or not you agree with the content we post, you click on those links. And we have the statistics to back it up.

We posted our Artists To Watch article, at the end of the year, on our Facebook wall with the blurb “2015 is the year of Kygo.” Now why would we use his name rather than any of the other 42 producers we believed would have a great 2015? Because statistics have shown us that using his name gets views. (I will address this later on.) The top comment at the time of writing this op-ed is the following:

How about you start writing some articles about unknown producers instead of constantly posting stuff about garrix, hardwell, kygo, skrillex etc. no hate, but that’s really not news I need to know of

Bloggers of any major site will tell you to never read the Facebook comments. Sometimes though, it’s good to see what your readers are thinking. In this case, the other bloggers would have roused me in a resounding and unanimous “I told you so.” Many of our readers think that what goes up on our Facebook is all that we post (seriously, some people think that) and that infuriates me to no end, but that’s not the issue here. The fact of the matter is, you say that you want us stop writing about these big names; you say that you want to see more posts about the underground; you say that you would like to see us post more music! But what you don’t know is that we have the statistics, the data, the numbers, to prove that you’re wrong.

So let’s break this down into the two main issues here: 1) Facebook, and the constraints it imposes upon us and 2) our readers and their internal wants vs their external actions.

Facebook fucking sucks. We don’t want to use that same deadmau5 picture every post; we don’t want to tag Skrillex in a post about Aphex Twin; I swear to you, we really don’t. Facebook’s algorithms make it so that you have to play by their rules, or your posts don’t get seen – it’s that simple. And it’s just so god damn deplorable.

We even did a little experiment the other night. We made a post about Camo & Krooked, a very well-known and successful DnB duo, and their 20 years of DnB mix. After an hour of waiting to see the stats go up, it was already clear what was going on. 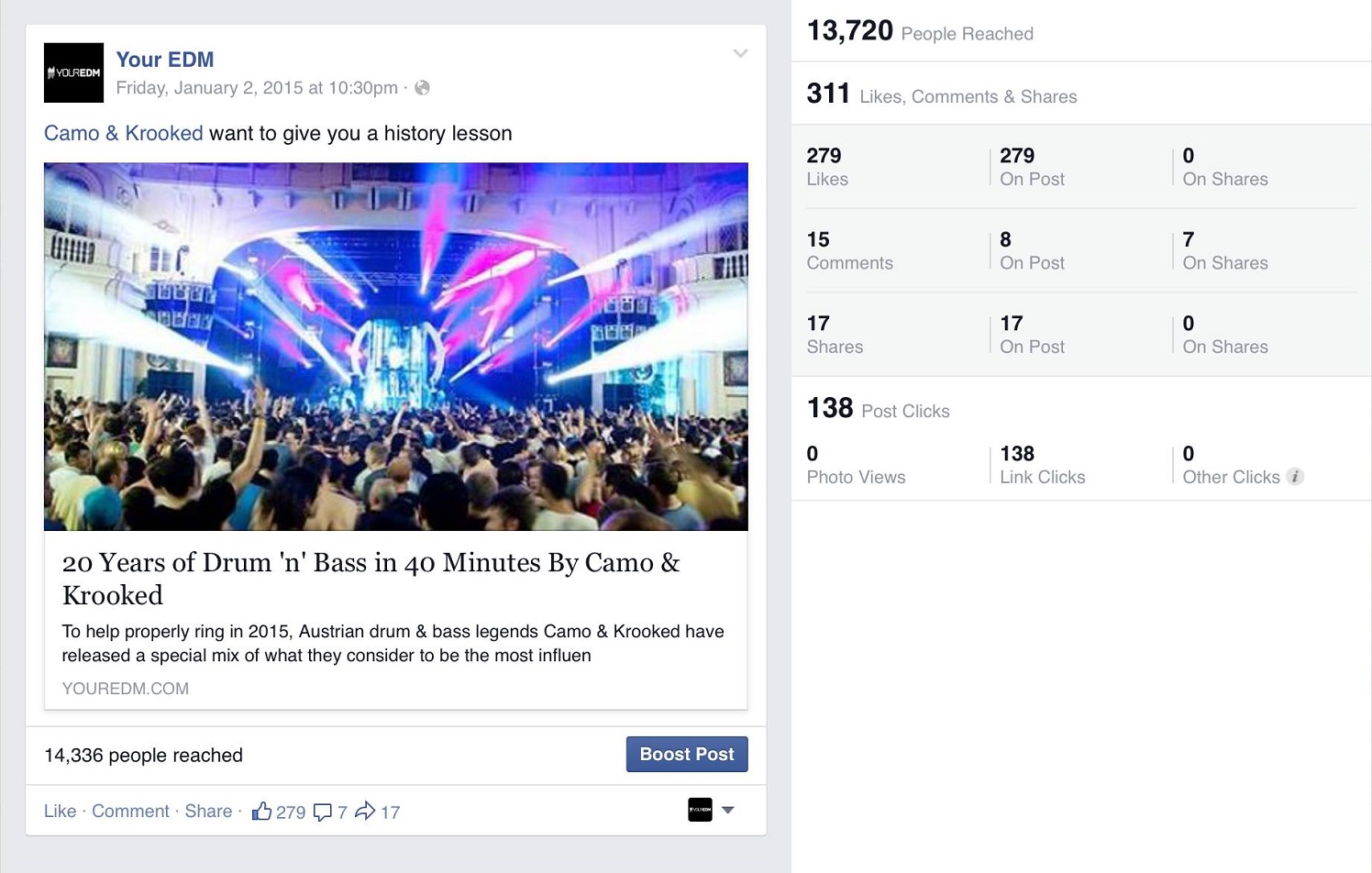 The post tanked.
It did terribly.
Despite the amazing content, no one saw it.
And that’s because of Facebook’s algorithm.

Now, the other issue lies with our readers. I read so often in the comments our readers want us to post less about the mainstream and more about meaningful music. But the thing is, unless our readers engage in (share, comment, like) our posts, they don’t get seen by anyone. Characteristically, statistically, our readers will not engage in content that is not at least somewhat engrossed in drama. We don’t do many giveaways anymore because no one enters them. We rarely post interviews on the wall because no one will read them. Our readers, and people in general, like to be spoonfed content and don’t like to dig for it themselves.

That’s why when someone comments on our page saying “[sic] i want your edm the edm network and all the other blogs to start promoting techno dnb hardcore hardstyle and other artists from the other genres cause its all bigroom prog house trap barely any trance we need more variety thas what edm stands for,” I get really pissed and this happens. 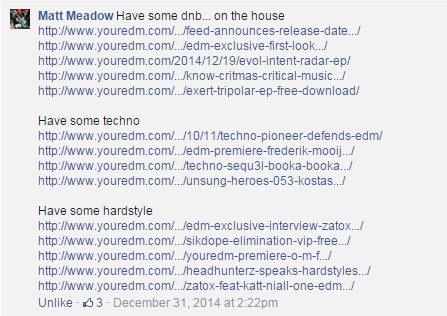 From the comments that I read on our posts, it is clear that a large majority of our readers are only aware of the posts we share on Facebook. I’m willing to bet that most don’t even know that we have a search function on the site. They ask us to post “techno dnb hardcore hardstyle” etc. and can’t be bothered to look it up themselves. It’s honestly very disheartening to be so privy to human tendencies; I’ve become quite a terrible cynic because of it.

The fact of the matter is fewer people care about Aphex Twin than Skrillex – we have the statistics to back that up. So as long as we are running this website as a business, we will continue to promote the posts we think will draw in the most readers. That means you will see relatively less music on our main wall; that means that you’ll see Skrillex, Diplo, deadmau5 and Kygo a lot more often than Angerfist, Dixon, Mefjus, or Rob Gasser.

However, let me be clear, everyone here at YourEDM loves the music. We share music amongst ourselves, we share it with our Family, we share it with our friends. The music is the whole reason we started writing (for the most part). If you weren’t aware, blogging isn’t a high-paying job, but we still have to treat it as one to get out the amount of content that we do. If you’re more interested in the music, I suggest you head over to our music page Your EDM Collection. If you like to discuss music, you can head over to Your EDM’s Family or our newly minted subreddit.

Sharing the popular news pieces is a necessary evil, a harsh reality, blah blah blah. Whatever platitudes and clichés I use, it comes down to paying the bills. Sharing the pop news stories allows us to generate revenue so that we can upgrade our servers, pay our staff, and keep giving away free stickers. In order to continue writing about the underground music that we love, we need to be able to pay the bills. And while we would love to occasionally share posts like the Camo & Krooked one above (which, by the way, was very well received), Facebook’s reach algorithms would tank our overall reach and make us less successful in the long run.

Facebook pages like those belonging to Do Androids Dance or The Untz prove our point even further. If you look at their numbers, their levels of engagement on posts, and the consistency of their posts, they are objectively doing worse than us. I’m not trying to poke fun at these blogs, they both do amazing work (I used to freelance for The Untz), but it’s the harsh reality of the situation.

So please, do not let our Facebook define us. Visit the site itself. Poke around. Look through our op-eds, our interviews, our event reviews. The gossip news may drive our traffic, but we’re in it for the music. Plain and simple.