Rising star Sweater Beats has got a lot going on for him. Starting from releasing a single on Soulection comp over 2 years ago, his single “Make A Move” (and the Branchez remix) and his Cloud City EP all out on Huh, What, Where?, the same label that releases tunes from Kaytranada, Taku, STWO, and more. Last year, he supported Chance the Rapper and Chet Faker on their North American tours, and played 2 Terminal NYC shows supporting Flume on his mini-US tour, after which he scored the official remix for Chet & Flume’s track, “Drop The Game.” He’s even got a collab with GTA coming up soon.

In recognition of this immense talent, Sweater Beats will be embarking on the “Sweater Weather” tour this month, including stops in Los Angeles, Toronto, Boston, and even Holy Ship! (See below for full tour schedule). Not one to feel lazy, he’ll bringing as many friends as possible, including Kastle, Manila Killa and Jai Wolf. He recently did a Quest Mix for BBC Radio 1, and Your EDM has got the exclusive stream below, along with a perfectly candid interview from the man himself. Check it out.

What is your greatest achievement so far?

Being able to pay my phone bill doing the thing I love the most.

Where do you want to be in 5 years?

Basically, I want to animorph into Timbaland.

Who is one person whose help you could not have done with out?

I really couldn’t be here without my management. They understand how the industry works way more than I do and I’m really bad at talking to strangers. I love you guys!

Can you describe the feeling you hope to incite into your listeners when they experience your music for the first time?

You know that feeling when you’re on an airplane and it dips a little, that one.

Who is one artist, dead or alive, you would love to make a song with?

What is your favorite song of yours and why?

I actually really hate all my songs after I finish them, I can’t be the only producer who feels this way…right?

Name one song that has had such an impact on your life that it has changed you.

Pony by Ginuwine has impacted my life and changed me profoundly

What is one misconception people have about you?

A lot of people think I’m from LA but I’m not. I was actually born in the Philipines, grew up in Maryland and currently live in Brooklyn…but I’m probably gonna move to LA soon haha

Would you rather wear a sweater vest of meat (any kind) or a normal sweater that smelled like shit?

Normal sweater that smells shitty. Sweater vests are tacky no matter the material

Is the “Sweater Weather” tour a jab at the Neighborhood or nah?

It’s a jab at all neighborhoods.

Is there any sort of meaning behind your name? Like does it mean “comfy music”?

Its like music to sweat to, however you want to take that. But I like yours better, so lets go with that.

Be sure to catch this dope dude on tour. Tickets on sale now. 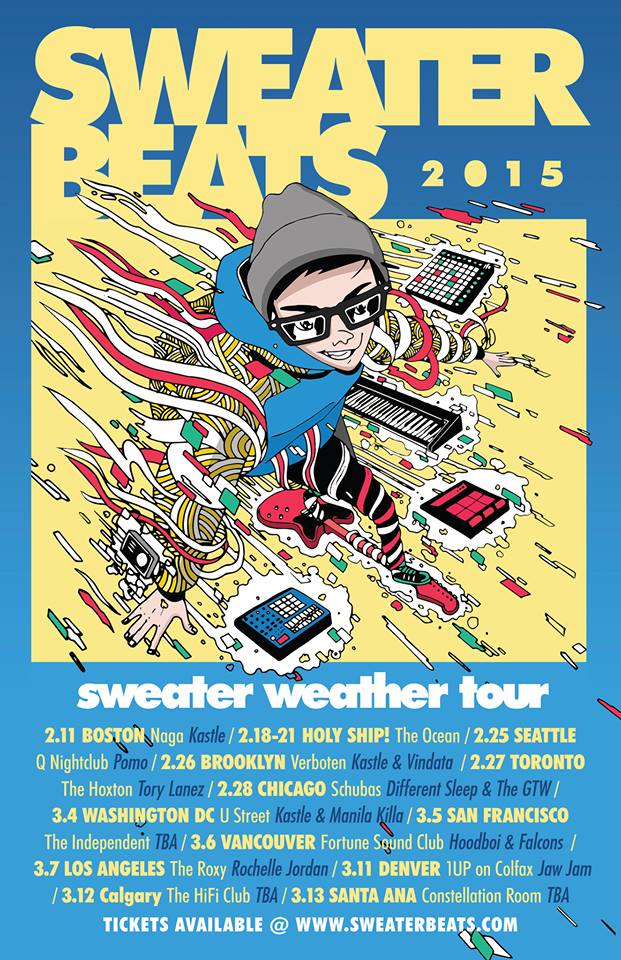