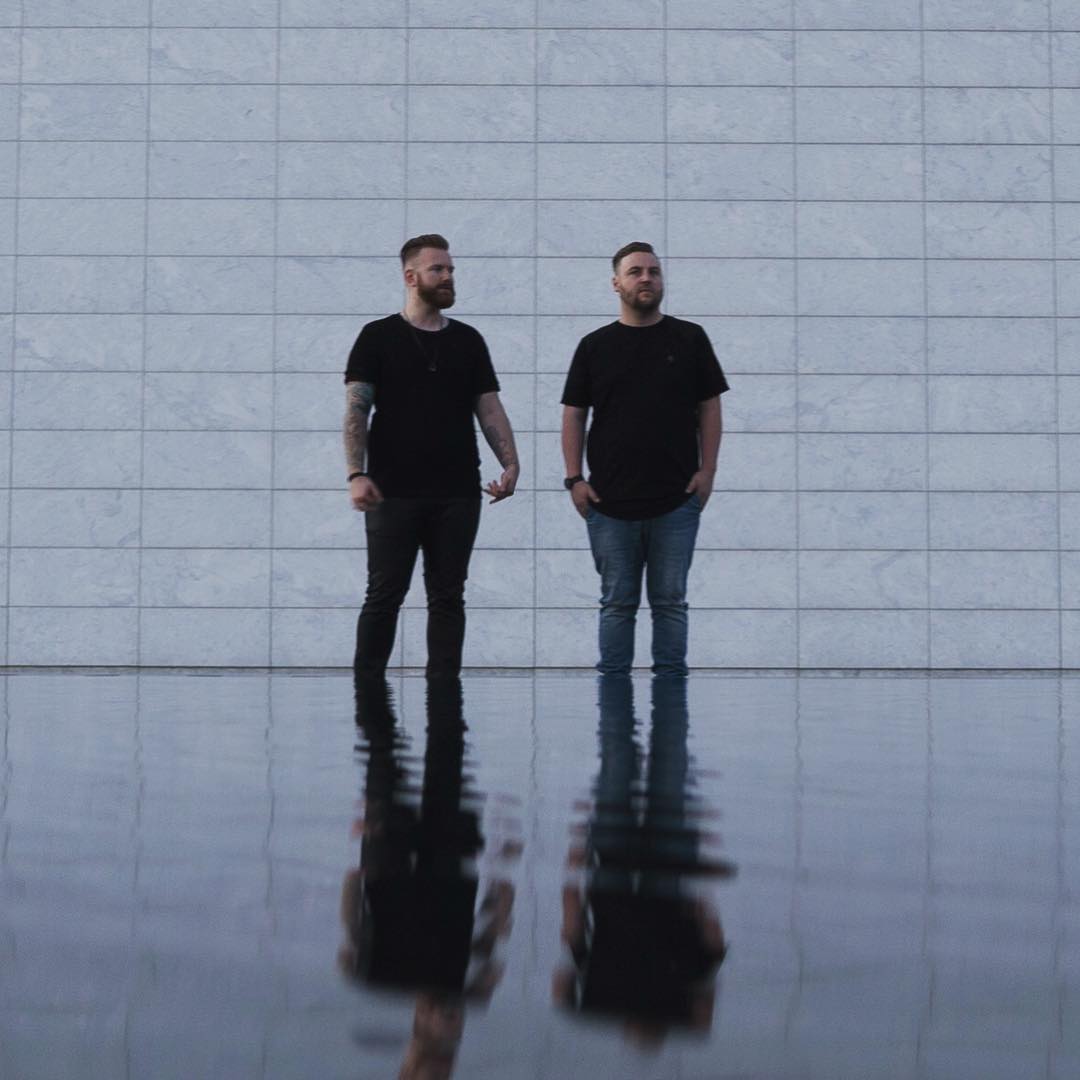 Toronto locals Rainer + Grimm have been mainstays for some time now, both at home in the six and at the top of the HypeMachine remix charts. With remixes of Golden Coast, Sam Smith and Years & Years all climbing to the top, Rainer + Grimm carried over their chart success with their debut single “Talk To Me”. Earlier this month, I found time to meet Rainer Miller-Blanchaer and Jeff Grimm over coffee after a short trip to the West Coast to pick their brains for a good hour about “Talk To Me” and their previous HypeMachine chart success. But mostly to listen to them finish each other’s sentences perfectly!

So you guys just got back from Vancouver, what were you guys doing out there and where else have you guys been touring?

Grimm: Yeah so we played a show for Timber over at Alexander Gastown.

Rainer: We had a couple buddies who brought us out there about a year and a half ago, it’s been our third time there and it’s always a good show

Rainer: We’ve done all the “North American tour” spots, but there’s still a couple of places left, like Miami. So we were away for almost all of August, three weeks and a bit, then back out again after a bit. We went out to DC, then back to NYC where we did a boat cruise with Viceroy.

Can you guys talk about your musical backgrounds?

Grimm: So I started out as an audio engineer, I’m actually still doing that right now. We actually both started out [at Metalworks Institute] and that’s where we met. We both have the tech side, but we come from more of a “feeling” side more so than a “learn every little thing about the equipment”. It’s more about catching a feeling, making a song.

So Rainer you actually worked with The Weeknd previously, how did that happen?

Rainer: That was right at the start of his career! We worked on “Wicked Games”, “Party & The After Party”, and “Shot For Me” for Drake. He was a super talented kid to work with that we met through a party with some mutual friends and we ended up getting together. He’s super creative and everything just flowed super easily.

A lot of your tracks and collaborations are with singers and not so much producers; would you guys consider yourselves more ‘vocal-centric’?

Grimm: We work better with a song first, a vocal first I’d say.

Rainer: A ton of remixes you may hear from other people, they may just take a few elements from the vocal and just make it around the beat. We try to always maintain the vocal…

Grimm: …so that it still holds up as a whole song rather than something that either needs to be heard in a particular set, or some kind of special setting. It gives it more crossover for people outside of the house music circle as well.

Have you guys ever collaborated with other producers?

Grimm: Not in the studio or anything, but when we were on tour we met up with Hotel Garuda hanging out with them.

Rainer: We try to hit up local guys everywhere we go.

Grimm: A lot of that stuff just ends up happening over the internet so it’s like you’re collaborating with somebody, but it’s rare that you’re both in the same room which is where we feel like we shine the most, if we can get everybody in the same room.

Would you guys say that speaks to your musical backgrounds?

Rainer: Yeah, so I grew up playing in bands. We don’t have problems going back and forth the internet, but it just feels less personal.

Grimm: It’s also a lot less instant. If you’re in a room together and you have an idea everybody’s either “yes or no”, it’s not like where you have to wait a week before you get that “no” and have to work on that idea again.

Rainer: It’s easier to work on that feedback if you get it right away, rather than waiting it. It progresses better.

I’d say you guys have that laid-back house style when it comes to your sound. For people who aren’t so familiar – what would you guys say your “sound” is?

Grimm: It kind of keeps changing, but it “stays the same.” I’d say maybe melodic house?

Rainer: Definitely also influenced by future house, tropical house, the more melodic side of deep house. Our sound is just how the influences come in. When we’re writing we don’t really worry about any guidelines, we just let it flow. We tend to just keep it house music in general.

Grimm: We’re also not tied down by just making house music, but it’s kind of what we’ve been doing up till now.

So you guys just dropped your debut single “Talk To Me” with Melanie. Can you go into the creative process of that at all?

Rainer: Originally the instrumental started off as a different track, that didn’t really go anywhere but we kept the instrumental. We’ve known Melanie and her management for a little while, so we’ve always talked about doing stuff and it wasn’t till this that it was anything concrete. We gave them the beat, they’d write some lyrics and then they’d give them back to us, and we’d go over it and edit it and tell them “oh this part needs to be stronger”. so lyrical content was mostly them, with a little on our end.

Grimm: Then we got in the same room and finished it. We changed the instrumental a bit and updated it, but then it was done!

Is there any sort of remix EP for “Talk To Me” currently in the works?

Rainer: So I think we have three remixes scheduled for “Talk To Me”, we’re not entirely sure if they’re going to come out sometime in the next few weeks or in the new year.

If you could pick any three guys to remix the track, with respects to the three who have already done it, who would they be and why?

Grimm: Pretty funny that we’re not picking house music, but it’s interesting seeing different styles, just flipping it completely. Maybe somebody heavier like EDX? That said, we’re very happy with the remixes that we do have!

So you guys have been dominating the HypeMachine remix game for awhile now, but this is your first foray into originals – what’s the difference like creatively?

Rainer: So when you’re remixing a track you’re taking somebody else’s work and trying to flip them or make them different, we always try to make them better. There’s parts there already…

Rainer: On a track like the Golden Coast remix, the original is the vocal but we wrote everything ourselves.

Grimm: Compare that with an original and its a lot more effort. It’s a completely different…

Rainer: …process – whether we start with an instrumental and then work with a vocalist to get it on, or if we start with the song and just work from the basis of the song and then come in and almost remix the original. It didn’t start off as a house track, it started as a song. It’s almost like you’re remixing yourself.

You guys mentioned in previous interviews that you’re working on an EP, have there been any new developments with that and other work?

Rainer: We’re focusing really hard on originals right now, we still have a couple of remixes in the pipeline but the next month and a half will be pretty much focused on originals.

Grimm: We’ll probably have one more remix coming soon, then that’ll be it till 2016.

You guys rep Toronto really hard, a city where I feel like a lot of people are very jaded, is that Toronto speaking or just the music industry in general?

Rainer: I think that’s just the music industry, I think every city will have a bit of that. We started repping Toronto hardcore a long time ago. I don’t mind it here!

Rainer: Just look at Billboard, the other week the top was like all Torontonians, like the top six!

A lot of the other producers here have all left for the bright lights of LA – do you guys see yourselves following in that trend?

Rainer: We were down in LA for five days before we started our August tour just getting songwriting sessions in, the density of the talent in that city is incredible…

Grimm: …just like how easy it is to work.

Rainer: Even if you’re meeting people who aren’t from LA and are just there for a week for whatever reasons. In Toronto, finding that talent is a lot more scarce. I would wanna go down to Nashville too at one point, but I feel like that speaks to our musical backgrounds. Song first than sound/production second.

Grimm: I mean I’m down to move to LA, but I’m also not in a hurry. It has to be the right time.

Rainer: It’s not like a “runaway from Toronto” move, it’s a business move.

So it’s about the bigger picture first and foremost for you guys, not so much “electronic music” and you guys wouldn’t want to limit yourselves to that?

Grimm: Definitely. We don’t want to limit ourselves on who we work with. It’s all about the song.

Rainer: We’ve done other styles of music before and we could be doing that in the future too.

What are some of the biggest shows you guys have played?

Rainer: At The Hoxton in Toronto we’ve played with Klangkarussell & Klingaande, those were probably two of the biggest and then we did some of our own headline shows on the Saturday.

Grimm: Outside of here we’ve played with Viceroy, Vanic in LA. Pierce Fulton in San Francisco, Pierce and ourselves come from two completely different musical worlds so I think that’s why it worked out.

Rainer: Yeah the goal of the opener is to be hype, but not as hype as the main act. We definitely played a lot more aggressive, but if the fit was a good match because we opened.

To the point about opening a show properly, what’s the dynamic like in opening for a DJ with a completely different sound?

Rainer: Gotta respect who you’re opening for. We always stick to our lane for the most part, but I’d say there’s a wide range of things we can do. If we’re opening for somebody who’s lighter we know to stay away from the heavier stuff like the future house stuff that we played at the Pierce Fulton show. We have a big range and we can change it up if we need to, but usually based on who we’re opening for.

Grimm: Don’t play their new single, or any of their songs!

What’s next for Rainer + Grimm?

Grimm: Definitely looking forward to getting back on the road? Getting over to Europe would be a top priority, we’ve mostly focused only on North America which is funny…

Rainer: …because most of our remixes are of UK artists.

Grimm: We also had a bootleg of “Can’t Feel My Face” that hit like 3 million in under 3 weeks before it got taken down. We’re hoping that becomes an official, or at the very least stayed up.

Final question: do you guys have any kind of pre-set ritual?

Rainer: Going over a set-list I guess. We don’t have planned sets, but just going over everything to make sure we’ve got a wide range.

Grimm: …yeah nothing really. We just roll up, drink a little, then play. You’re gonna have to ask Prince if you want a better answer!