Opinion: Zedd Calls Out Donald Trump, More Should Join In

Yesterday, Zedd took to his Twitter to publicly mock Donald J. Trump following his recent proposal to ban all Muslims from entering the United States. In doing so, he joined a pantheon of non-American critics who have come out in condemnation of the business tycoon’s ideas and actions during his current presidential campaign.

Donald Trump is my favorite comedian.

From Prime Minister David Cameron to British author J.K. Rowling, an overwhelming amount of international commentary has emerged since Tuesday referring to Trump as an abandoner of traditional American values and an inciter of hatred against entire factions of the world’s populace. Despite the seemingly mutual outpouring of scorn from both sides of the aisle, however, Trump still holds the foremost spot in the Republican race.

My own opinion aside, the point we’d like to focus on here is the amount of influence a simple tweet like Zedd’s can have on the people that read it.

Combining just his Facebook and Twitter accounts, anything Zedd says has the potential to reach about nine million readers. Most of these readers, it’s fair to say, followed the pages because of their affection for the artist, love of his music or enjoyment of his Internet presence. They care about Zedd, and care what he has to say.

With this kind of reach – especially one that’s made up largely by young, avid supporters – the words and ideas posted in such statuses can have great influence. Take any celebrity on social media and look at the comments on one of their opinionated posts. Of course, there will be some dissenters and many more who simply ignore it all together. But for the most part, hearing the opinions of those you look up to can change your own mindset on the matter. 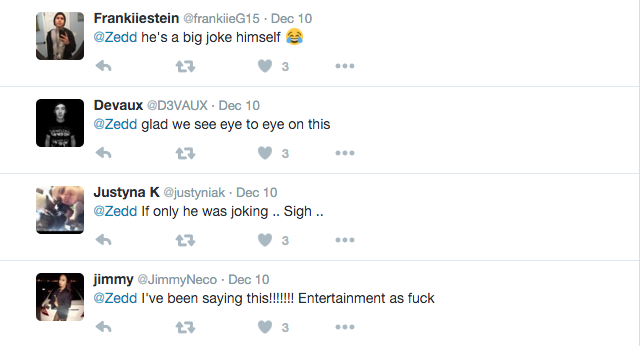 If, like Zedd, you have a celebrity-level following on social media and care deeply about certain political or social issues, you really do have what it takes to change a lot of minds. It’s for this reason that we ask you – whoever you are – to join Zedd in his endeavor of bringing attention to the issues in our country that require our direct attention and participation. As a nation, when we are confronted with issues that resonate deeply in our cores as wrong and unacceptable, we have no excuse to sit idly by. With the right resources and a tempered, educated approach, those with a support group like Zedd’s can make a substantial difference.

For more information of the world’s reception of Donald Trump’s proposition, watch the video player and read this New York Times coverage.