Varien Brings Huge News To Fans to Kick Off 2016

As you all are aware, Varien is an incredible electronic music artist. Over the past couple years, he has managed to climb new heights with powerhouse label Monstercat, where he’s had many singles as well as a large LP featured. He’s also been working on composing music for movies and tv shows, including The Loft and The Walking Dead. You can see his list of 2015 accomplishments below: 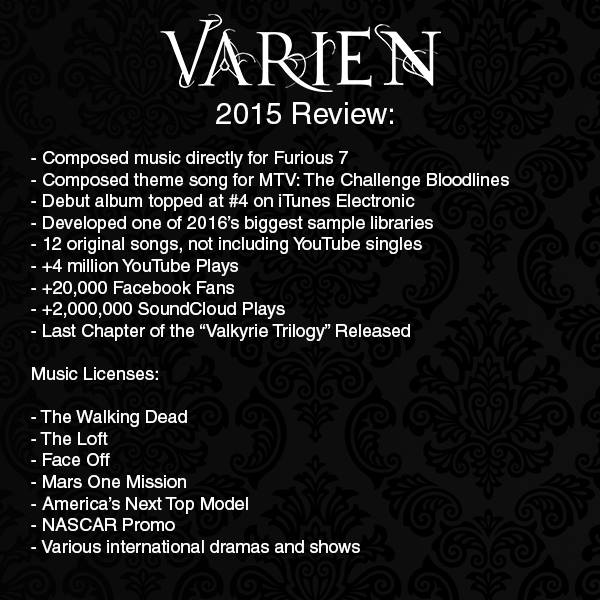 Now this masterpiece making producer has more up his sleeve for us. He just announced on his Facebook page that he intends to release two Varien tracks a week, starting this Saturday! He has dubbed this newest upcoming release as “Ravenscore”. You can see his full announcement here, and I also had a moment to get a statement from him regarding this new adventure:

Ravenscore Announcement!Announcing: Two Varien tracks a week starting this Saturday! I entitle this project “Ravenscore”.Wednesdays and Saturdays at 2pm EST on my channel: http://bit.ly/VarienYouTube

“I wanted to be more in control of my music and have one central hub where I can focus my full attention. I just want to release whatever I make. Music that I feel is good for all of my fans and listeners to hear. This also gives me the chance to remix and rework some of my favorite music from games. This is something I know my fans have been wanting since day one! I’ll be working with my usual cast, but also bringing in talent that I haven’t worked with before. A little bit of everything! I do plan on releasing stuff outside of my channel as well. I have a heavy trap EP in the works and a new trailer compilation. I do have many more goals for this year, but none that I can share yet. This year is going to be a good one for me!”

It’s really exciting to see someone so tenured in this industry reviving themselves, giving fans a boost of what they’ve been waiting for, and being so prepared for such a fantastic journey. So be sure to tune into Varien’s Youtube channel on Wednesdays and Saturdays at 2pm EST. So subscribe, follow, and get ready for Varien’s amazing start to this new year!