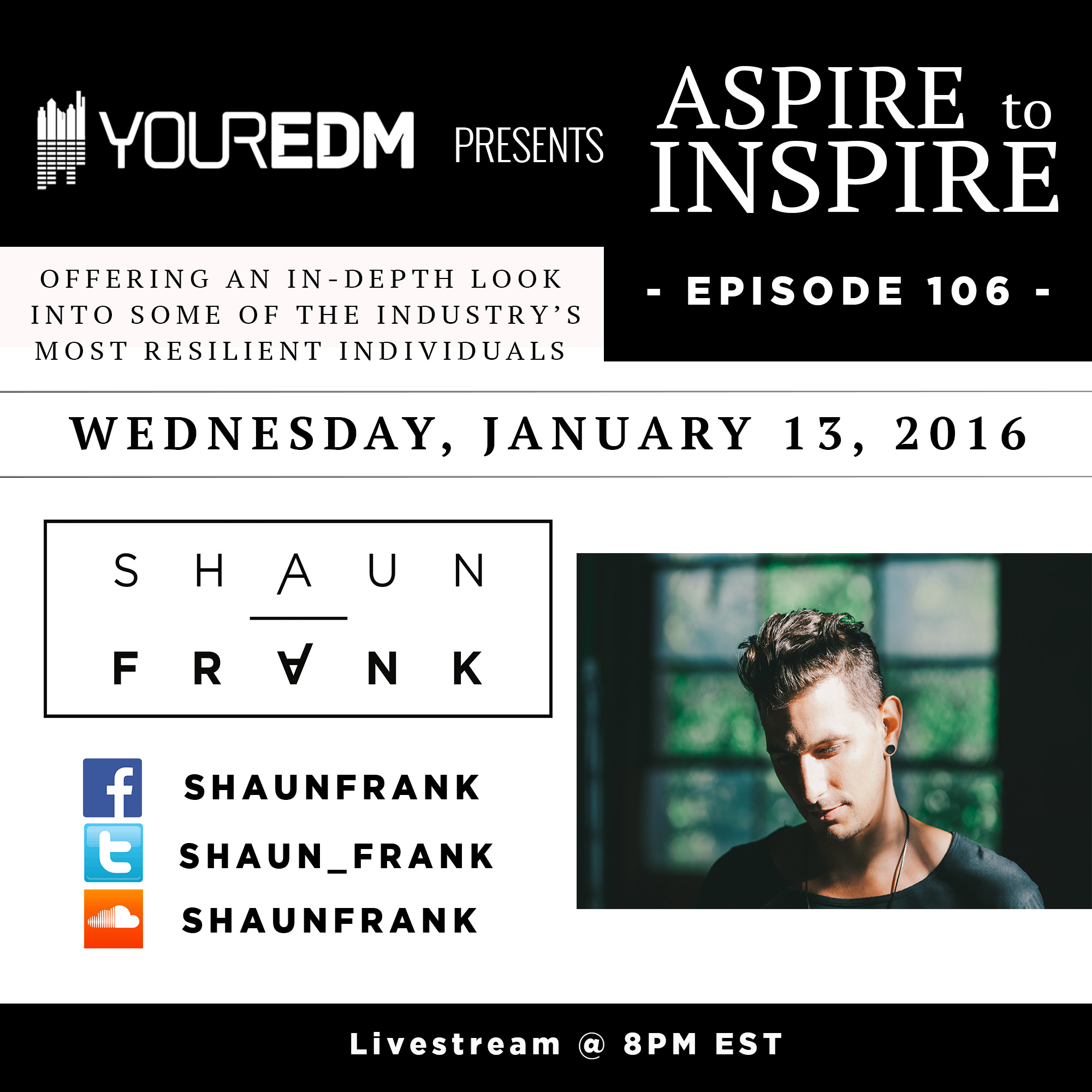 As we make our way into 2016, many of us have probably already broken our New Year’s resolutions – go to the gym every day, stick to a certain diet, drop that fire mixtape, etc.  You know what though, if you break from a certain preset notion, you might find something way better.  A perfect example of that is the fast rising producer/DJ/Songwriter, Shaun Frank.  Shaun’s electronic music career has just gotten started, but he’s already made his mark on the scene with massive hits like “Shades of Grey” with Oliver Heldens and “Heaven” with KSHMR.  Growing up in Canada, Shaun had aspirations of being a pro snowboarder when he was a kid.

“I wanted to be a pro snowboarder. I grew up in the mountains of Whistler, Vancouver and snowboarded 60-100 days a year. I played guitar as well and had a passion for music. Then I started a band, and that took off before my snowboarding career.  I toured with this band for many years as a singer, and that’s how I got into dance music because I sang on dance records.  I was always producing as well, both with the band and my own music. I fell in love with house music very quickly.”

Like so many other artists out there, Shaun is a perfectionist, tirelessly working to perfect his craft.  He holds himself to a high standard and is always looking to make his music better.  He says a major fear as an artist is not reaching his potential and despite his success, he knows he can do even better.  He draws inspiration from other artists he knows who also work tirelessly, so much so that he says they don’t even sleep!

“I’m never 100% satisfied with any of my tracks and I always wonder if I’m ever going to make that one track where it’s like ‘That’s it, that’s the one!’  It doesn’t have to be the one that sells the best or tops the charts…I don’t really care about that…I just need to absolutely love it. Being an artist can be a curse sometimes because you’re always trying to one-up yourself and therefore, you’re never content.  I put a lot of pressure on myself. I know that I can do something crazy and I want to get there…”

When Shaun’s fans reach out to him for production advice, he can’t help but to stress the importance of perseverance. When he’s at home, on the plane, in the hotel room, etc. he is constantly producing music or thinking of ideas for a future song. He expressed admiration for his good friend, Don Diablo and said, “I can’t even match that guy’s work ethic. I feel like everything he does…he does it better than everyone else and it’s because he doesn’t sleep. He just works and works and works and is so on point with everything. He keeps me on my toes.”

It’s been quite the journey for Shaun, one of self-actualization; not only through overcoming his personal tribulations, but also through the development of his music, Shaun has always sought to control his musical destiny.  When his rock band failed, he learned many lessons that he’s carried over into his house music career. Shaun’s focus is clear.

“I want to be able to do whatever I want, that’s the whole point of this.  I don’t think anyone chose to be a musician so that they could be told what to do.  Music is like the ultimate ‘fuck you’ career. I’m trying to just maintain power and control, and surround myself with people that support what I do rather than those who try to change what I do.”