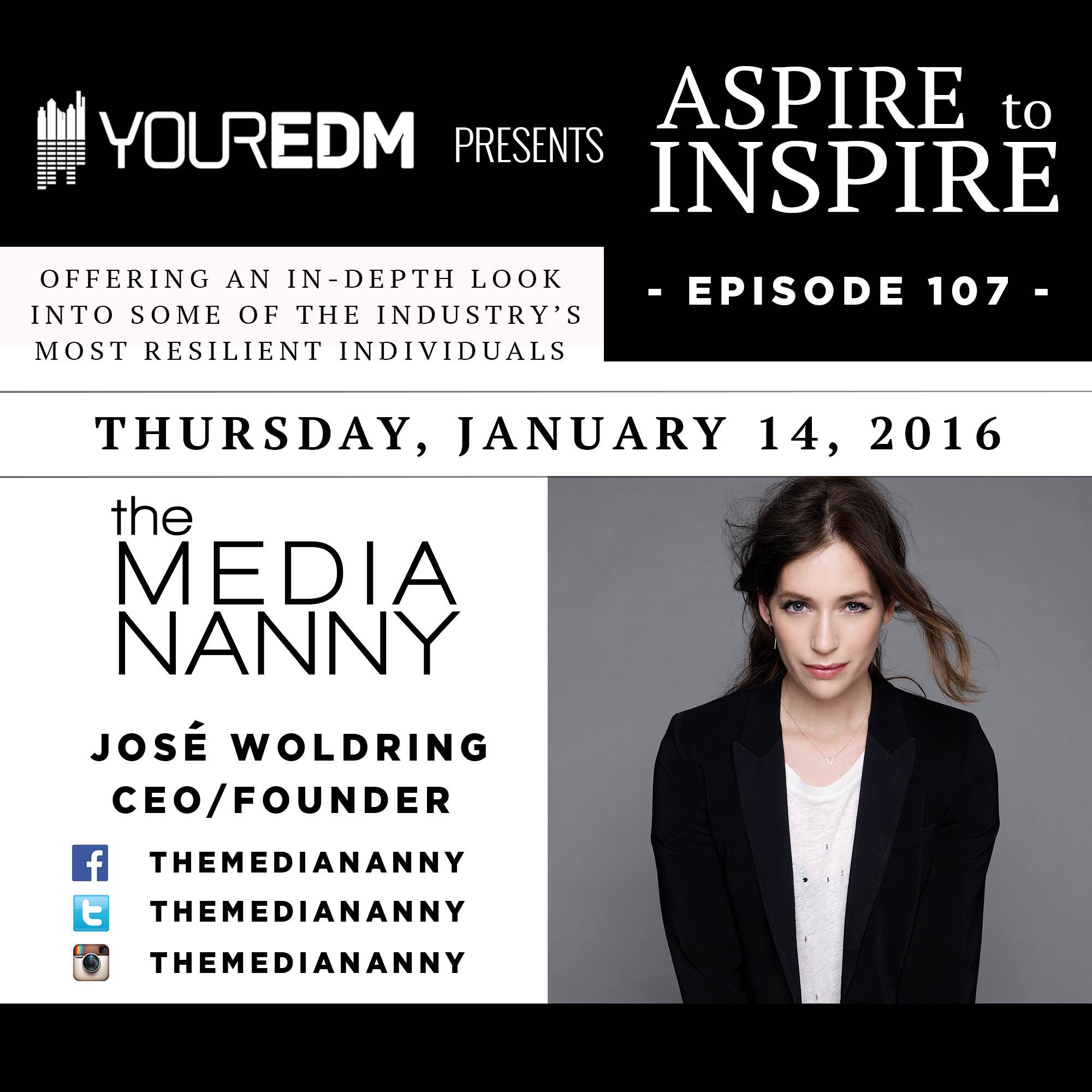 Everyone has a certain leadership style. History is filled with authoritarians and people rough around the edges.  However, every now and then you hear stories of those great leaders who just have that personal touch.  They make you feel wanted and let you know that you’re a unique individual not just another piece on the chessboard.  One of these great leaders in the music industry is José Woldring, Founder and CEO of The Media Nanny – one of the biggest PR firms in dance music.  From her humble beginnings riding horses in rural Holland to representing and touring with some of the biggest names in the business including Martin Garrix, Afrojack, Joris Voorn, Oliver Heldens, W&W, DVBBS, and Arty.

“Knowing all of our artists on a personal level is very important to us at The Media Nanny. I really care about every one of them, and they know it.  I always want to know how they’re doing, try to join them on tour, etc. That plays a big role in our professional relationship.  Every artist is different, but they also show lots of similarities in this particular industry so we always try and look for things in their personal life and other non-music related subjects that we can use in building their profile in the media. To stand out from the rest, it’s important to look further instead of just contacting the music editors with a new song every week.”

José grew up in the Dutch province of Groningen. She was an avid horseback rider and to this day, breeds her own horses and rides in competitions regularly. Music was never really on her radar as a kid.  However, as she grew older she got more into Hip Hop and began breakdancing too. At 18 MTV asked her to be one of their VJs, which is when her PR career started to take shape. Founded in 2010, The Media Nanny has grown from a one-woman operation to a staff of 12.  As her business grows and evolves, José draws inspiration from many sources – her artists, her PR team, and especially the fans she sees loving every moment at the events she gets to attend.  Like so many others José sees the power of dance music.

“Business wise, it’s inspiring for me to see how this scene has grown from local movements in Detroit, London, or Amsterdam into a worldwide community.  I’m amazed by how connected everyone feels through dance music.  For us it’s a job and a passion that we have, but for a lot of people it’s much more.  It’s like a vehicle of escapism in a certain way.  It’s inspiring to me to see so many people enjoy the music of the artists that we represent.”

Although she’s now a veteran in the industry, the perks of the job are not lost for José and her team.  José loves the road environment not only because she can connect with her artists on a personal level, but also because she gets to see her entire team’s hard work pay off while her artists thrive.

“It’s one of the best parts of the job!  Whenever I’m on tour with Martin [Garrix] or any other artist, I get to see what I have been working so hard for, which is amazing!  And it’s just great to be on site during interviews or other PR activities, coordinate everything, and help the artist when necessary. It is also great for my personal relationship with each artist because I get to experience the amazing moments in their careers.”

One of The Media Nanny’s most high-profile clients is Martin Garrix, and having been around him since day one, José cites his appearance at Ultra Miami last year as a career highlight and a truly inspiring moment for her, as she was able to see everything come together for such a close client of hers in a big way.

“Martin really inspires me as a person and has been a big influence for me in the last years while building my company.  I remember standing front of house during his show last year at Ultra Music Festival Miami and getting super emotional…I was so proud!! After the show it turned out the whole Garrix team had felt the same!”

From her humble beginnings in Groningen to touring with Martin Garrix, José should be an inspiration for everyone.  Not only because of what she’s accomplished, growing her business from the ground up into a worldwide brand, but also for being one of the few women in an executive position in a male-dominated industry.  José’s doing her part in the following way…

“I would say that I’d really like to see more women in high executive positions or starting their own business.  I think I’m already contributing by being a female business owner and more importantly, helping out other women who want to reach a position similar to mine.  Over the years women in executive positions has become less of a taboo topic. I think we’re on the right track for sure.”

Whether it be pride in her business accomplishments, her artists’ highlights, or the massive strides made by her countrymen in the music industry, the one thing that inspires her the most is her son, Finn.  If only everyone brought that same personal touch, the world might be a little bit friendlier of a place…the dance world sure is because of people like José Woldring.