The tenth anniversary of the Movement Electronic Music Festival is quickly coming up during Memorial Day Weekend on May 28-30 in Detroit, and organizers have ramped up excitement by revealing the full 2016 schedule for the event. Conflicts will pose a problem for many attendees, which is business as usual. Thankfully the various shades of house, deep house, and especially techno are kept evenly spaced apart so that fans of a certain subgenre won’t often have to pick between two major acts.

However, some conflicts will assuredly post a problem for attendees. The Movement debut of the legendary Kraftwerk is a must-see, but they’re pitted against Caribou, Len Faki, and Detroit hero Carl Craig. Ouch. On Saturday, Loco Dice, The Black Madonna, Heidi, Tiga, Magda, and Art Department all play during the same hour and a half block, so choose wisely. Monday offers less conflicts on its closing day, but fans will still be forced to pick between a 3.5 hour Richie Hawtin set, Chris Liebing into Modeselektor on the main stage, Nina Kraviz and Boys Noize closing out the Acid Showcase, a slight Dirtybird showcase with Justin Martin into Get Real, and Guy Gerber into Kevin Saunderson.

Take a look at the full Movement 2016 schedule below, and head over to Movement’s website to purchase tickets. 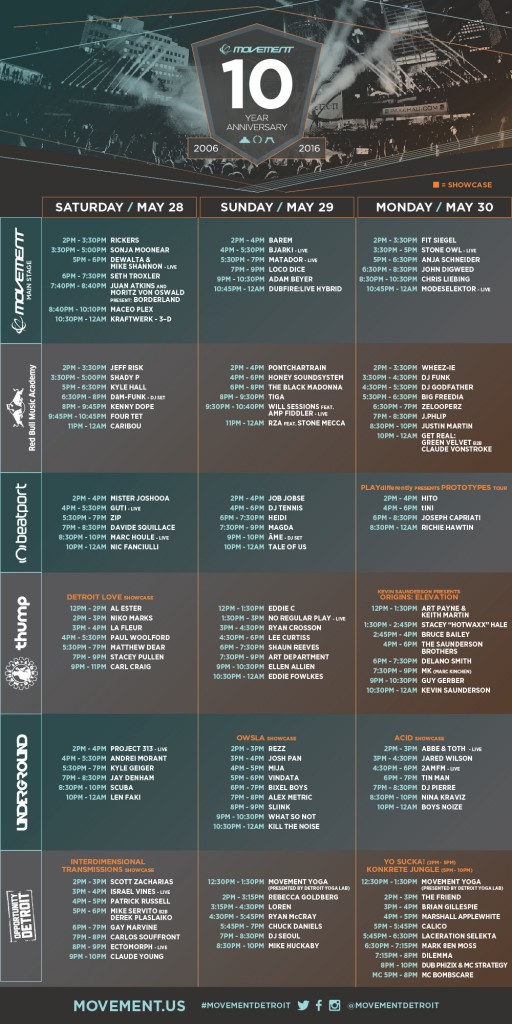