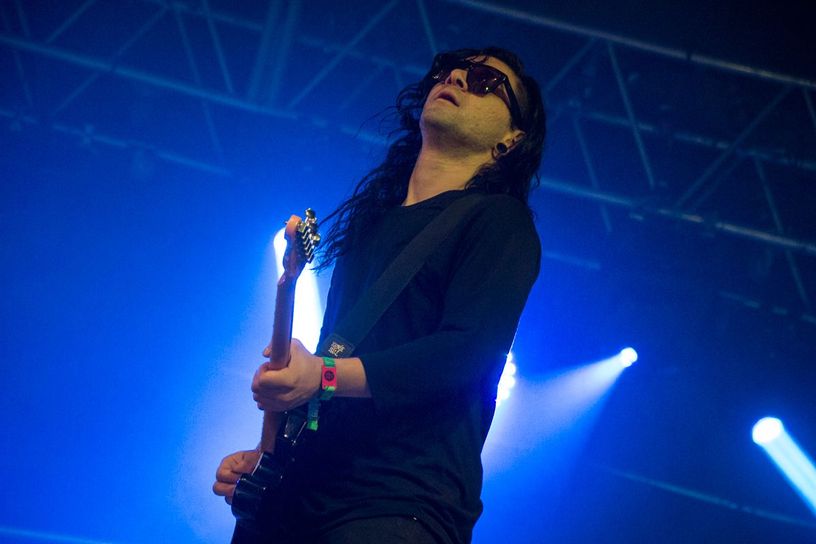 Back in June, it was revealed that Skrillex would be opening for legendary rock group Guns N’ Roses on the Houston stop of their long awaited reunion tour. Coming as an unexpected and controversial choice for the tour, with a fan base that seemed unlikely to be receptive towards a towering dubstep DJ set, we were hesitant to trust that the opening set would be seen as a success.

In a recent interview with Rolling Stone, however, Skrillex describes the NRG Stadium performance as an opportunity for him to break expectations. He said that ever since he left his former band, From First To Last, the purists that surround him have regarded him as a very polarizing artist.

“It gave me a challenge to see what I could do under those circumstances.”

Despite being an enormous metal fan for most of his life, he said, Guns N’ Roses didn’t fully enter his listening circuit until recent years, he said. “Welcome To The Jungle” in particular, he said, that he never managed to learn on the guitar.

“As much as I want to say I was the biggest Guns N’ Roses fan, I didn’t know them as much as I did metal bands until the last couple years. My appreciation has been greater [more recently] just because of how life goes. You go in and out of different phases of what you listen to.”

For an entire week before his opening performance, he said, he created brand new remixes and edits that channelled his long maintained allegiance to rock and metal.

“I wanted to warm up the crowd and entertain them so that by the time Guns N’ Roses came on they were semi-turnt. I put in my big songs and of course remixed them and did mash-ups. I threw in a bunch of old metal songs, as well. That was my preparation: throwing in Iron Maiden, Metallica, Pantera. On ‘Purple Lamborghini,’ I threw the Lemmy a cappella from ‘Ace of Spades’ on the instrumental, so it had a little bit of Rick Ross and a little bit of Lemmy.”

Despite dealing with Guns N’ Roses fans who hadn’t prepared themselves for such a new-age performance, he said, the addition the new material and more vocal-centered DJing eventually warmed up the crowd to his sound.

“I’m not gonna lie — and this is what I expected too — when I stepped onstage, people were sitting down and were like, ‘What the fuck?’ After a few songs, I started throwing in some of the metal remixes and pitched them all to be in the same key as the ones I was mixing them with so it felt like a really smooth set,” he says. “There was definitely moments when I threw in Queen or threw in the first Metallica sample, and people were like ‘Oh shit.’ It became a big sing-a-long.”

The most important approach Skrillex took, and what separates him from a large portion of the EDM sector, was his willingness to play tracks that his crowd would enjoy rather than turning the spotlight completely on himself. By sticking to rock classics, metal edits and more approachable variations of his most famous tunes, he was able to connect with an otherwise distant community and prepare them for the main act.

“I wanted to entertain people. It wasn’t a selfish thing. I didn’t want to make a statement or do the opposite and be like, ‘Fuck you.’ I wanted to create something for the fans that they could remember.”

Check out footage of the Houston event below.