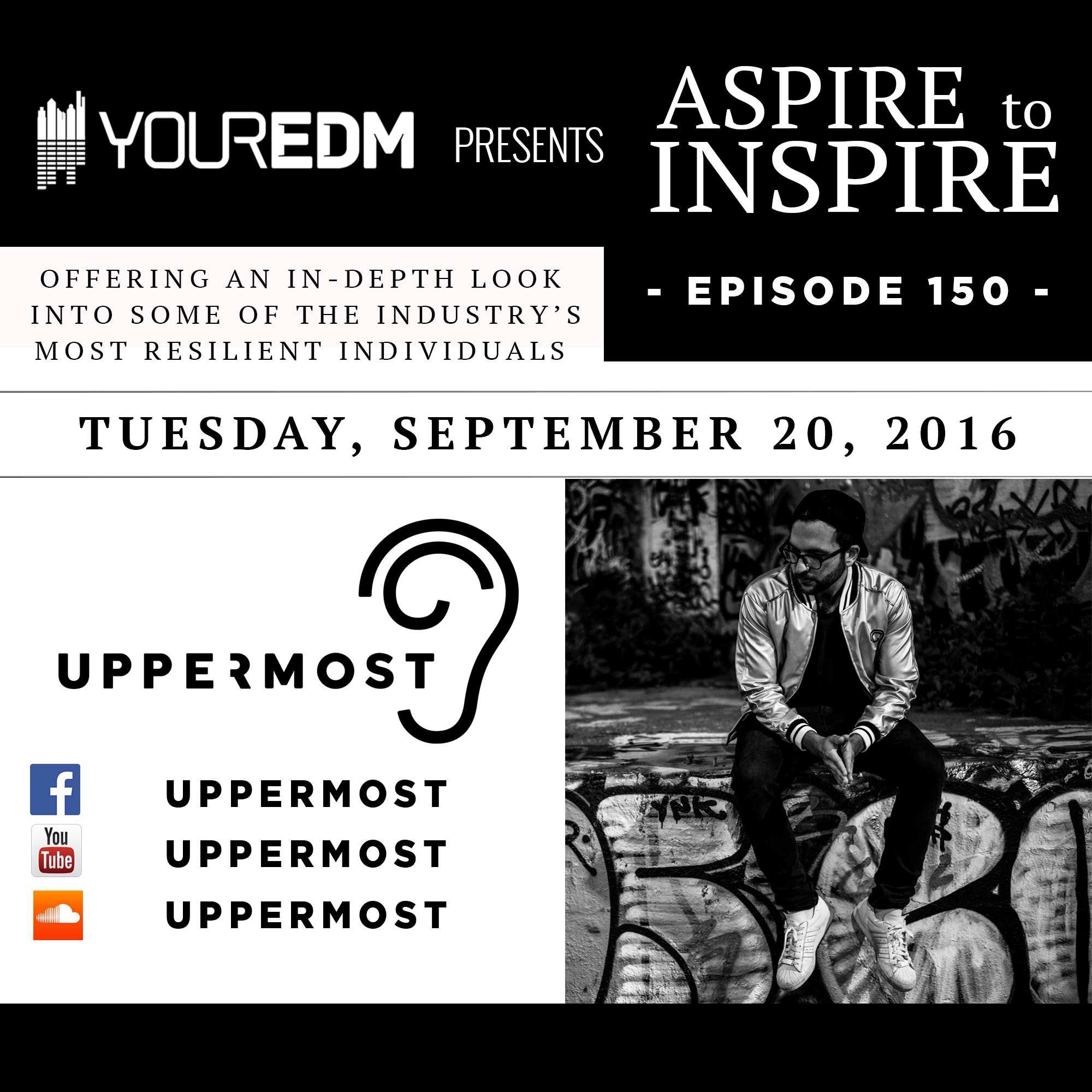 We all encounter times of despair, doubt, and sometimes we even question our very purpose in life. When your daily life is cruel, how does one rise above the darkness and stay true to the path they know is their own? In the case of French DJ/producer, Behdad Nejat, better known by his stage name, Uppermost, he knew it was the difficult and lonely path that would ultimately lead him to happiness. Surrounded by bullies in his youth, and watching his peers pass him by in adulthood for more conventional career paths, one must wonder…how on earth did this guy maintain the fortitude and vision to follow through on this? Like a prophet, Behdad says an inner voice guided him.

“Back in my childhood I was bullied most of the time in school. People made fun of everything about me: my clothes, my hair, the way I talked, etc., they liked to push me to the limits by threatening and beating me. I had to deal with it for a few years, but as I grew up things became less harsh. I kept doing what I always did – staying true to my inner voice and moving towards my dreams and inspirations no matter the consequences. I spent a lot of my teenage years alone drawing, recording random radio stations, writing little stories, and playing around with my brother’s synth. All these things helped me to keep moving forward.”

Behdad paints a quaint picture of an introverted and curious youth that spent most of his time dreaming about what may become. I think that’s something we all dream about when we’re young. However, those who don’t conform are often ostracized and can be pegged as someone who is lazy, something almost all of our society looks down upon. This was another challenge Behdad had to overcome; his focus has always looked beyond the existential. Honestly, we could use more thinkers like this.

“I’ve been day dreaming most of the time since I was a kid. It often lead people to think I was a weird and lazy guy.  I can’t really describe the state of mind I’ve always been in; it’s an admiration for every empty place and meaningless thing. Like if every place and element had a soul, a mesmerizing power that I could deeply feel and get lost in. I never gave up on this vision even if it meant being alone and isolated most of the time. I guess this is my reality.”

It’s funny how life has a way of working itself out. Behdad found a way to stand up to his bullies, and in the process this made his resolve to succeed in the music world even stronger. Fast forward to adulthood, and it can be difficult to see friends moving into upper management at a corporate job or seeing others settle down with significant others and starting families, all the while, you’re busy plugging away at the thing that will make you the most happy. As Behdad puts it, despite not knowing whether he would succeed or not, he knew it was the life he’d chosen or bust. Nothing else would suffice.

“I think my biggest fear was seeing people around me building their lives with regular jobs, families, etc., while all I kept doing was expressing myself through music with no guarantee about what would happen next. This fear vanished when I told myself this is the life I want to live whatever it costs, because that’s what makes me feel alive.”

Remember the super-dramatic movie Braveheart where Mel Gibson plays Scottish folk-hero William Wallace? One of the most dramatic parts of the movie is when Wallace says, “Every man dies, not every man really lives.” I think this is exactly what Behdad is pointing too. Everyone has something unique that gives him/her a sense of inner peace. For Behdad this was making music, and he was willing to sacrifice other areas of life in order to succeed in music. Although his path was not the conventional one, he knew it was the right one for him. It has allowed him to live.

That’s the moral of this story. Follow your dreams, unconditionally. When someone says no, take that and use it as fuel to prove that you actually can do it. The path to greatness can most certainly be a lonely one, not everyone makes it, and it is much less crowded at the top. However, that’s not just a maxim for people seeking fame, that’s advice for anyone going down an unconventional path. Those who think outside the box are not often widely accepted, however, if they stopped doing their thing, we’d all be worse off. As Behdad puts it, being a unique individual is one of the strongest characteristics anyone can undertake.

“Forget about the world. Don’t compare yourself to anyone else because you are truly unique and it’s the most valuable thing ever. Don’t let people make you doubt your potential. You can do so much more than what you think you can. Stay focused on what inspires you and believe in what makes you feel alive. Don’t look down, life is a fight and you have a mountain to climb in order to get where you want to go. Remember that your oxygen is the positive energy you choose to surround yourself with.”