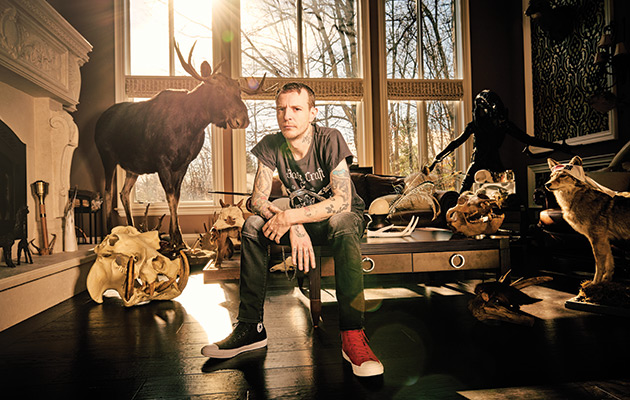 Deadmau5 Talks Vocalists, New Album & How He Almost Killed A Fan On Accident

Whether you love it, or hate it like deadmau5 himself, W:/2016ALBUM/ has finally been released to the public. After a live-stream premiere of his new album and stage production, mau5′ eighth studio album is now available on vinyl, digital, streaming, and virtually any other medium you could wish for, barring cassettes.

To mark the occassion, deadmau5, real name is Joel Zimmerman, reluctantly agreed to an interview with NME to discuss everything from the beaten topic of Twitter beef, to taking production risks. Thankfully, NME sent an intrepid journalist to interview Zimmerman, making it past any initial abrasiveness to return with some untold stories in addition to details on the new album.

While deadmau5 remains entirely apathetic to how he’s regarded in the public eye, he’s perfectly content locking himself in his multi-million dollar mansion in the woods, stocked with plenty of tech to keep him busy for quite a while.

“Going out and being nice to the world at large doesn’t make me feel good so I replace that with things, with technology that does get me excited and does get my brain spinning until one day it stops spinning and then you can bury me.”

But this new album is his first LP released on his own label, mau5trap, after bailing himself out of a deal with EMI. It’s clear Zimmerman has similar sentiments to those of Daft Punk or Porter Robinson, placing creative control as the imperative, and favoring innovation and integrity over crafting the next hit.

“I make music for my peers more than my fans. If I made music for my fans I’d still be writing shit like ‘Faxing Berlin’. I’ll definitely get some fans being like, ‘Man, deadmau5 used to be good, now he sucks’ but it’s like, no, I’ve done that sound and I’ve moved on.

“But it’s not just a monetary thing, it’s also about control of your own creative vision. If it was all about money I’d quit this shit in a second and go into fuckin’ commercial real estate.”

When the discussion ventures into vocalists, Zimmerman reveals he’s all about finding unknown diamonds in the rough, like Grabbitz or Chris James. Now that he’s got full ownership with his own label, even more creative freedom is allowed regarding collaborations, but he’s not about to cut any Guetta-like deals with Rihanna. “She’s in the studio for two, three hours, hums some shit out and then she wants 75% of the f**king publishing? Are you off your f**kin’ tits?”

Zimmerman eventually got comfortable enough to loose an untold story about punting a fan off of his Cube however many years ago, thinking for a moment he might have done the unthinkable.

“I nearly killed a kid once, I’ve never told this story. So I’m playing live, up in the Cube. I’ve got this LED helmet on, I’m six foot in the air, I can barely see. All of a sudden I hear my manager screaming in my earpiece, and I feel someone grabbing at my waist. This kid has somehow climbed up into the Cube. I just panic, I kick back at him, and he just drops and lands on his back – bang. And he’s motionless. I take off my helmet and look down, and for what felt like a looong time I’m like, ‘I just paralysed or killed that kid.’ Then finally he bounces up and is all ‘Wooo!’ at the crowd. Never been so relieved in my life.”

A huge thanks to Joe Madden for the rad interview and getting borderline chummy with one of the more secluded names in dance music. For the full article and interview, click here.