In anticipation of Burning Man‘s next installment in August of 2017, the festival has emerged to announce the official theme that will govern much of the art and spectacle of the event. Last year, the Black Rock Desert-based event encouraged attendees to adhere to the loosely described “DaVinci’s Workshop” theme. Now, 2017 burners can look forward to an artistic concept dubbed “Radical Ritual.” 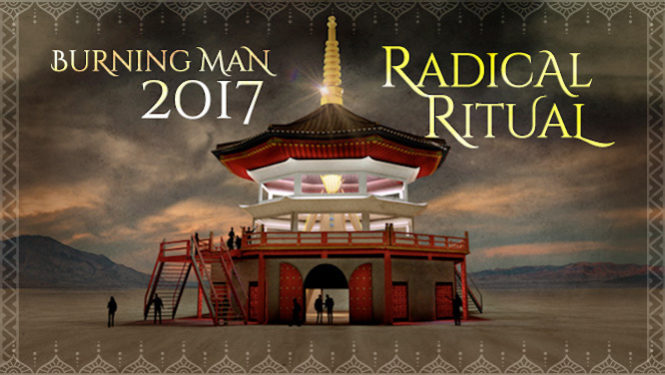 According to the Burning Man Journal, 2017’s theme will center on the idea of religion as an opportunity to choose one’s path, as well as what each individual will revere as sacred. Attendees are encouraged to perform rites, rituals and create shrines, temples, icons and more.

“Beyond the dogmas, creeds, and metaphysical ideas of religion, there is immediate experience. It is from this primal world that living faith arises. In 2017, we will invite participants to create interactive rites, ritual processions, elaborate images, shrines, icons, temples, and visions. Our theme will occupy the ambiguous ground that lies between reverence and ridicule, faith and belief, the absurd and the stunningly sublime. The human urge to make events, objects, actions, and personalities sacred is protean. It can fix on and inhabit anyone or anything. This year our art theme will release this spirit in the Black Rock Desert.”

Rather than focus on strict religious mentality, organizers will be guided toward an atmosphere of play. As writer of the theme Larry Harvey writes, “Whole-hearted and creative play induces self-surrender to experience that is beyond the realm of reasoned thought.”

“This year we will erect a temple that will commemorate the Golden Spike. Circles surrounding circles will converge immediately beneath the Man. We will mark this space with an omphalos, a sculpture that will represent the navel of our world, its central hub and gathering place. Passing through the spine of Burning Man, this axis will continue upward, emerging high above the temple as a golden spire.”