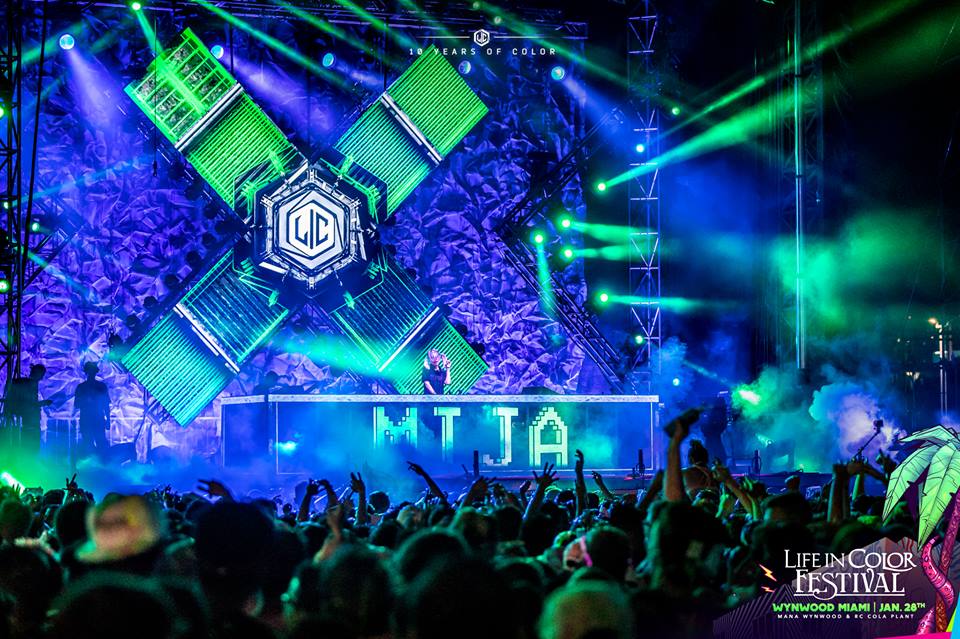 By now, it would be expected that the novelty of getting blasted with streaks of pink, blue, and green would be a tad bit irritating. After all, paint parties have been around before Life In Color came to be.

What started as over-the-top college parties at Florida State University over a decade ago evolved into one of Miami’s most unique series of concerts in the last five years. From massive expansions across South Florida, touring across the country, and even a Guinness World Record for “most people covered in paint at one time,” the people behind Life In Color reimagined their paint parties into a festival experience that combines massive themes with enormous musical performances. And this year was no different.

Much like Ultra Music Festival, Life In Color’s flagship is in Miami, where prior installments packed enormous crowds by the Hard Rock Stadium. This year, however, the music festival made a venue change, trading the expansive parking lot of the Miami Dolphins’ football arena for the intimate combination of Mana Wynwood and the abandoned RC Cola Plant. At first, I came to believe that this is a continuance of the downsizing of Life In Color’s concerting production as Wynwood is a tight neighborhood. After Life In Color 2014 spread its stay for a full weekend of musical messes, LIC 2016 returned to a single-day music festival criteria while still bringing a fierce lineup of commercial house, trap, dubstep, and hip-hop.

To my surprise, the switch made Life In Color feel larger than ever as it sat between large murals of street art and chic restaurants.

Coming into the venue, the main “Sector X” stage featured opening acts Nitti Gritti and Bonnie X Clyde whose musical careers kickstarted from Wynwood Fear Factory and Life In Color 2016 respectively. Between new music, both acts have unreleased and tenacious bangers shaping 2017, their acts set the tone for the incoming performances on the main stage and for the nearby “Rare Stage” which took the form of a circus tent. It was over here that equally bass-heavy performances from Fresko, Doctor P, and Ookay transitioned from the dusk and into the evening. I stayed here for quite some time before returning to Sector X.

In between both stages where a vast array of food trucks and stands offering funnel cakes, gyros, salads, and more. Yet, most of these places began to run out of food faster than they could make new food for future customers. I found that around the time that Marshmello and Desiigner were set to perform (between 9p.m. – 11p.m.), the lines were too long to properly serve anyone and the food being served was underwhelming in comparison to their relatively high prices. This problem struck the hardest for the main food stands that supposedly offered hot dogs, gyros, and Philly cheese steaks because all of these options disappeared by the time Mija was finished with her performance. This came as such a shock to me as previous installments were able have had less food truck options while still having less issues with serving the fan base.

As the evening began to gear up for the headliners, it became abundantly clear that Young Thug was nowhere to be found on the lineup when he was apart of the promotional lineup for the event. However, after seeing his recent antics in not showing up for his own music video shoot, I think this was a little outside of the hands of Life In Color. Meanwhile, every other headliner delivered terrific sets from the melodic dubstep powerhouses such as Seven Lions and Illenium to the electro house bangers coming from the sets of Mija and Tritonal. The night was topped off with performances from Diplo and Carnage who dropped trap, dubstep, and moombahton tracks to send off the 10th Anniversary of Life In Color with flying colors.

Even though there were hiccups with the food provided for guests and one headliner was unable to make an appearance, Life In Color blew my expectations. I went in believing that the transition to Wynwood (which usually hosts underground concerts) would be particularly arduous as it was about to host a relatively commercial music festival. But seeing the success of Wynwood Fear Factory last Halloween and LIC’s using the size of two venues to host the whole event, Life In Color established another successful show filled with head-banging EDM and the most tolerant body paint to be splashed on the faces of its fans.