In the wake of Coachella’s newest installment of back to back weekends and the fast approaching start to festival season 2017, Pitchfork took it upon themselves to break down and analyze the types of performing acts expected to show up most frequently on event posters around the nation. By looking at over 1,000 artists included on 23 of the year’s biggest, multi-genre festivals, the site found a series of fascinating trends among the music scene’s top names and their presence in the larger event circuit.

In order to remain fair and accurate, Pitchfork broke down the 23 festival lineups with two different methods: CLOUT and OMNI.

Using the CLOUT filter on the associated data visualizer, users can compare acts based on their “average placement on a poster, with more weight assigned for bigger festivals.” For artists like The Killers, Arcade Fire, Big Sean, Kaskade and Lady Gaga, the CLOUT score takes into account both the sheer number of events they’re slotted to play in 2017 as well as their respective size within the general event pool. These rankings are dominated mainly by those playing only Coachella and Lollapalooza. 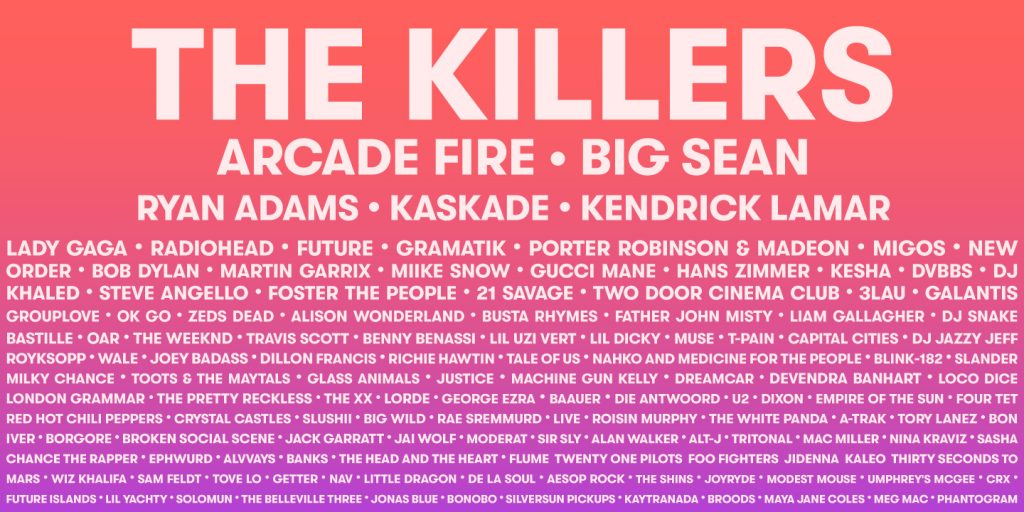 OMNI. on the other hand, tallies scores based on artists’ physical positions on the festival posters they’re booked for. The closer to the top and the bigger the font, the higher the score. The first act listed on a festival poster receives the highest possible score, which is equal to the total number of acts playing at the event in questions.

“For example, Bonnaroo 2017 lists U2 first and has 100 bands, so Bono and company receive a score of 100,” Pitchfork writes, “followed by Red Hot Chili Peppers with 99, and so on down to Nashville singer-songwriter Aaron Lee Tasjan, who gets one point.”

Based on this type of categorization, the acts leading the charge are Lorde, Chance The Rapper, Glass Animals, Phantogram, The Shins, Cage the Elephant and The Head and the Heart – note the lack of overlap between the two. 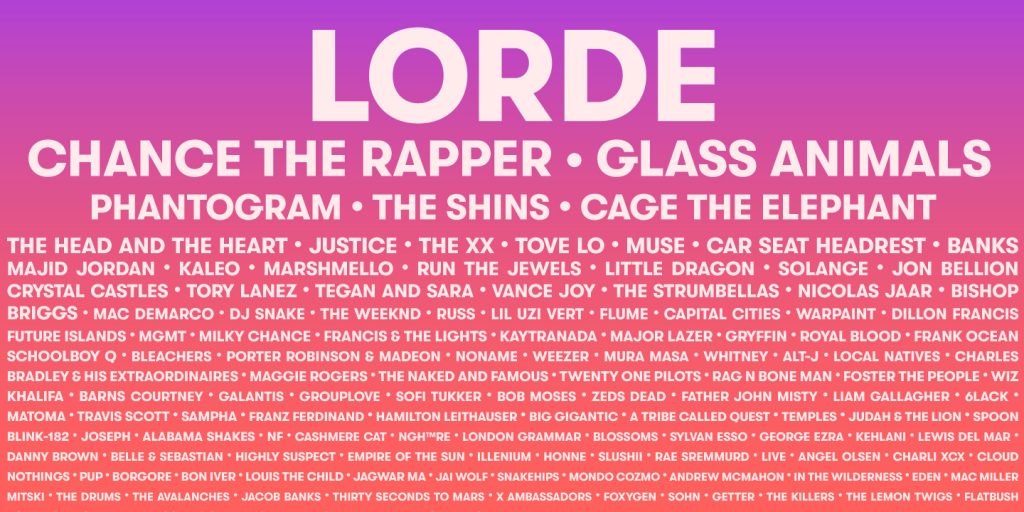 Pitchfork next turned over the lens to look at the factors that made each of the 23 festivals unique, chiefly their selection of acts and the frequency with which they were booked on other events. In this category, it was the New Orleans based Jazz Fest that topped the results, owing mostly to their highly specified genre selection. Following close behind are Pickathon, Karoondinha and Sunfest. 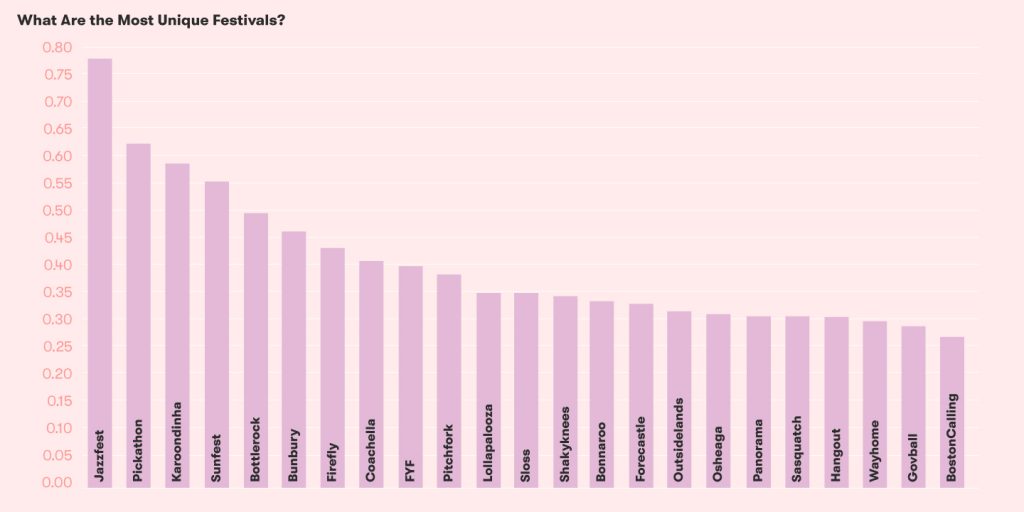 From the festival’s newly attributed “uniqueness score,” Pitchfork turned to each of the event’s 2016 lineups to calculate the possible shift. For the most parts, the largest and most publicized festivals increased their “uniqueness score” from last year, but not by much.

“[…] This change is due to the inclusion of new festivals like Karoondinha and ’90s-indulging Bottlerock, both of which are trying to carve out their own identities,” writes Pitchfork. “For the festivals where we have two years of data, the average uniqueness is almost identical.” 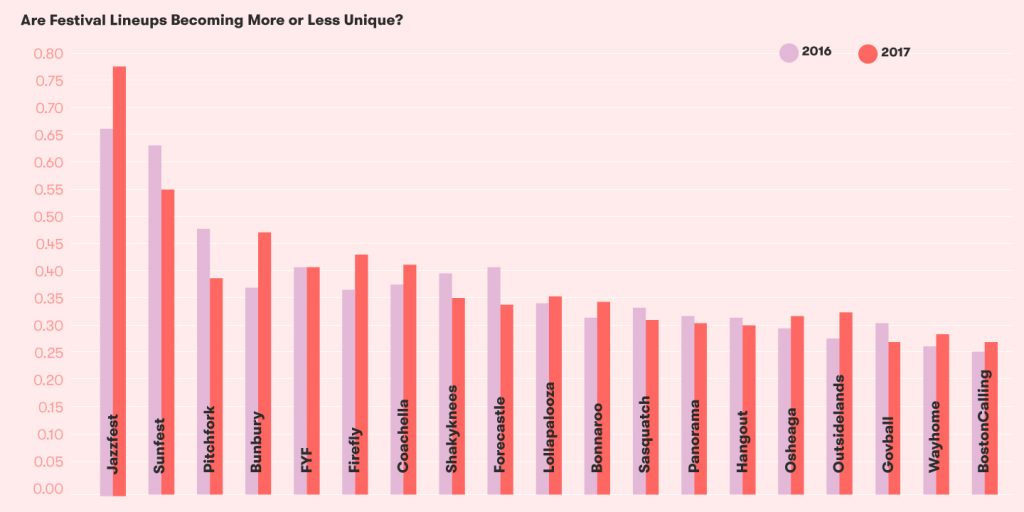 Finally, Pitchfork broke down the number of shared bands between the season’s three largest festivals – Bonnaroo, Coachella and Lollapalooza – from 2005 to 2017. At the start of the data, the events share very little overlap when it comes to bands that appeared on all of their rosters. As the years went on, however, Lollapalooza’s percentage of shared acts reached staggering marks of about 46% in 2007, 44% in 2009 and 42% in 2013.

On the whole, Coachella has remained as the most unique out of the three festivals, its 2017 lineup coming more than 5 percentage points below Lollapalooza. 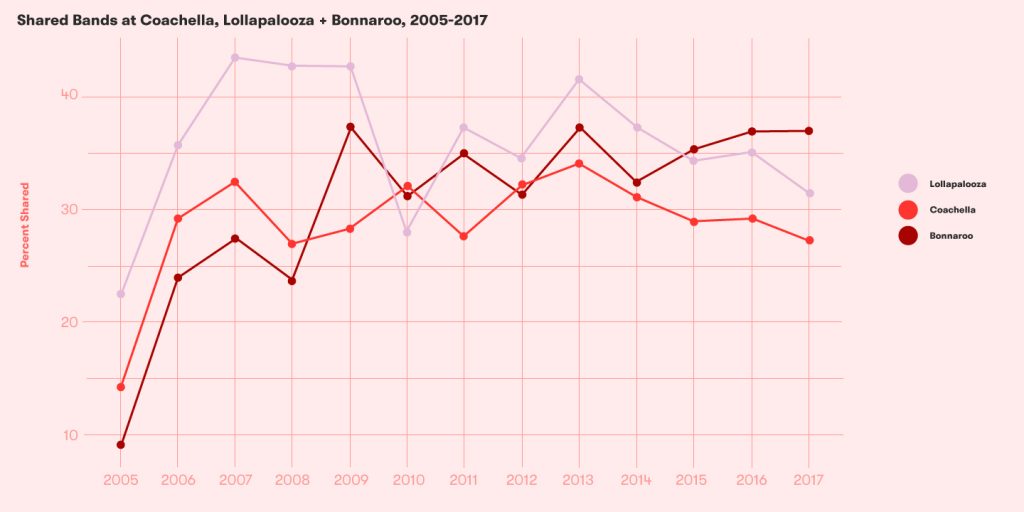