HARD Summer has been leading up to its 2017 lineup over the past two weeks, sharing trailers and aftermovies for its festivals from the beginning to last year’s. Today, the lineup dropped and it’s getting a lot of mixed reactions. First, however, let’s focus on one thing: Dog Blood is back.

The duo composed of Skrillex and Boys Noize is making its return this year at Hard Summer Music Festival and that’s no trivial bit of news. The group hasn’t performed since HARD Red Rocks in 2015, so this is a much welcome return.

However, HARD Summer has a very unique aesthetic and has somewhat backed itself into a corner in regards to headliners. Over the past few years, we’ve seen headlining performances from Calvin Harris, Zedd, Skrillex, Tiësto, Major Lazer, Jack Ü, Justice, Dillon Francis, Flosstradamus, Knife Party and more. Without repeating headliners, your choices dwindle.

In the past year or so, HARD has been transitioning heavily into hip hop, including The Weeknd and Ice Cube as headliners in recent years. This year, they’ve really pushed even harder in that direction by including Rae Sremmurd, Migos, and Snoop Dogg as headlining acts. Also included further down are E-40, YehMe2 (Josh, previously of Flosstradamus), Madeintyo, and others.

HARD favorites return in droves, including Bassnectar, Zeds Dead, Jai Wolf, What So Not, Kill The Noise and many more. However, fan reception to the lineup has been heavily mixed, with many not liking the addition of hip hop, and more saying that for a 10 year anniversary, it should be better. However, curation is one of HARD’s strongest points, and we’re keen to see how the lineup plays out in real time.

See the full lineup below. Tickets on sale Friday at 9 AM PST via www.hardfest.com. 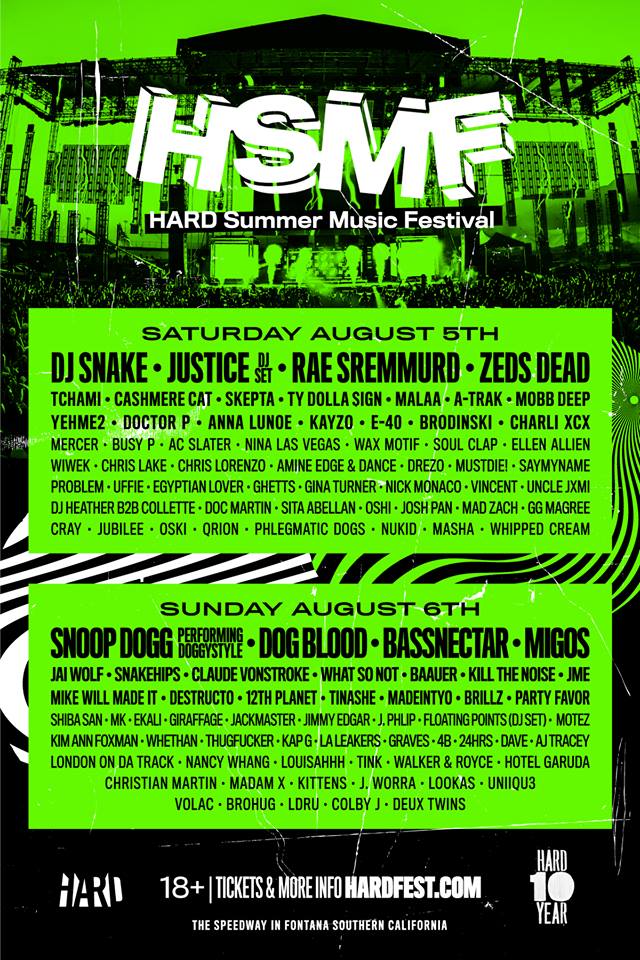