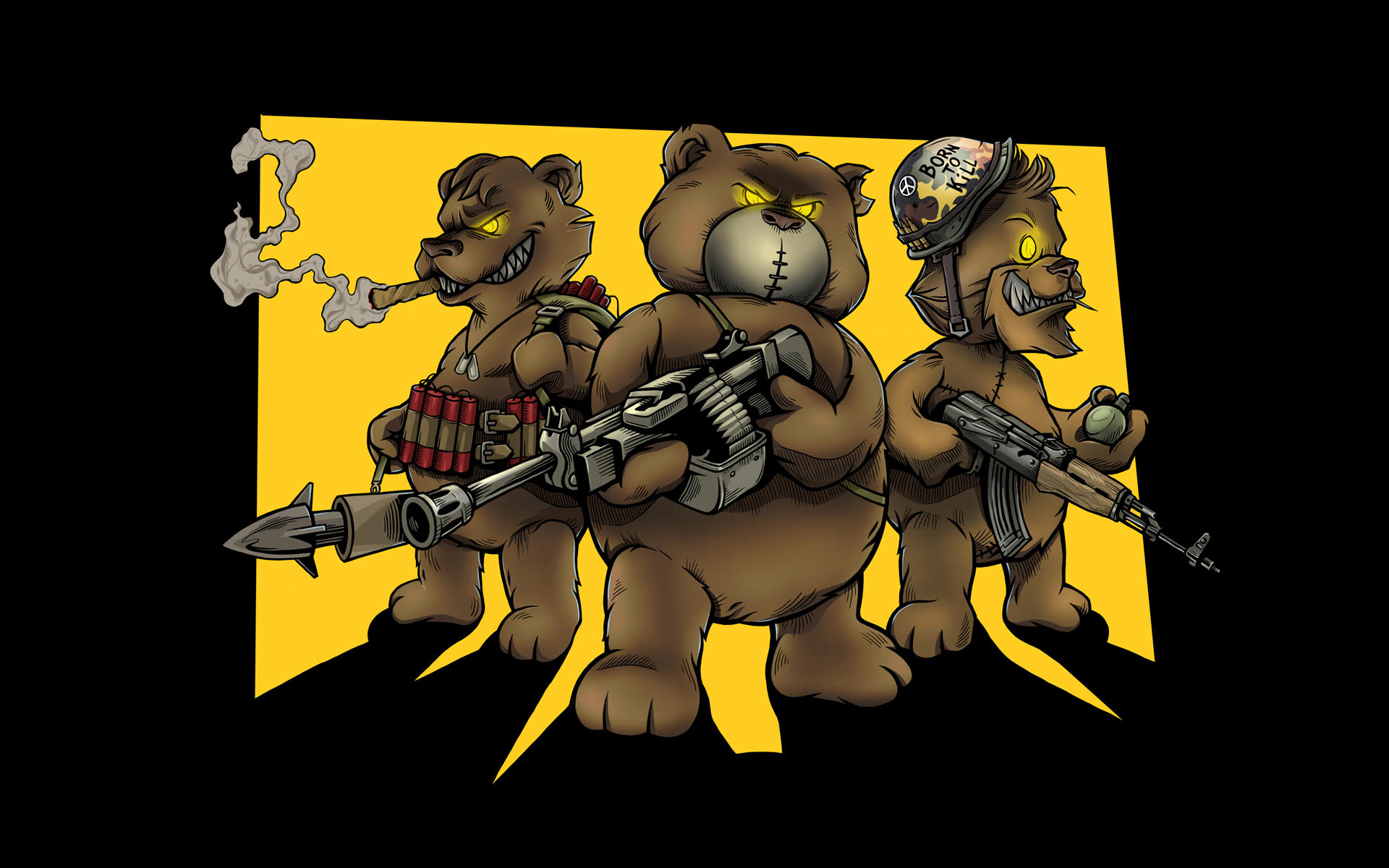 The Russian and Ukranian trio that is Teddy Killerz have been gaining steam since they became a trio in 2012, with Greg “Garud” Cherekaev joining at that time and bringing a more diverse bass music platform to the drum and bass sound already cultivated by Anton Mashevsky (Place 2B) and Oleg Cholovskii (Paimon). Their new LP, Nightmare Street, out this Friday, is a compilation of sorts of all the different styles of music the group have made over the years, as well as some of their favorite things about each genre. For the premiere of “Chopper” a track which is bound to be one of the hottest from the forthcoming EP, Your EDM sat down with Garud to talk about the origin of Teddy Killerz, the philosophy behind the trio’s diverse style, and the trippy, wicked graphics and animation that go into each release.

So the album, Nightmare Street, has a lot of different styles, and not just within drum and bass but all across the board of bass music. How did you decide to straddle so many different genres and how did you pick which tracks would go on?

Well, when we thought about making an album, we had to go back to the beginning of Teddy Killerz, since they were originally a duo known as Place 2B and Paimon, and it was just straight drum and bass. I joined them later and after discussions we decided we didn’t want Teddy Killerz to be a strictly drum and bass project anymore. So when we thought about doing the album with RAM, we wanted to represent that. In the beginning when we signed with Owsla we were doing glitch hop, and we did midtempo as well and trap and dubstep, so we always are not trying to conform to any one genre necessarily. Drum and bass, as we all know, tends to really suck you in and doesn’t let you go, so there’s times when you just don’t want to make anything else and we’ve been making a lot of drum and bass lately but with the album we wanted it to reflect all our work.

It sort of seems to be something unique to Teddy Killerz where you guys have been able to genre-hop quite a bit. That’s getting more accepted nowadays, but why do you think it’s been so easy for Teddy Killerz to integrate so many types of bass music?

Well, on one hand we really haven’t counted ourselves as strictly drum and bass from the beginning, so we just think of it as, we all grew up on albums like with the Chemical Brothers and Fatboy Slim and The Prodigy, and so with those guys there was really no definition of genre. They were making everything. Just music, so that was our mindset. We love drum and bass and that’s why we have more drum and bass, but we still wanted to make the music that we really like.

So how was that reflected on the album in your opinion?

Well it really reflects our whole history. From different DnB tunes to midtempo, halftime, some dubstep, trap and then future bass was the last addition, with “Stockholm feat. Laurent John”. That track was fun because we started out wanting to make it liquid funk but when we sent our ideas and sort of sketches of the song to Laurent John, he just sang so well that it ended up more as future bass to go with his voice, really.

So sometimes it was just an accident that you ended up with a different style.

Yeah, that happens a lot, but in my opinion no matter what genre I feel like they all sound like us. They all have elements that I think make it sound like Teddy Killerz, but with this track (“Stockholm”), it was just done completely for fun and I think not recognizable as a Teddy Killerz track. We just liked it so we put it on the album.

Are you going to continue with this format with future albums? Mixing genres?

Actually, this album will be the last big multi-genre album for Teddy Killerz. As a group under that name, we will be just focusing mostly on drum and bass in the future, but who knows? As for other sides of bass music me and Paimon just started a new project called Yokomono  with its first release on Circus Records. Genre-wise Yokomono will be everything: breaks, trap, dubstep, EDM, no genres excluded.

Well, honestly, even if you decided to keep them combined, it seems like Teddy Killerz can do no wrong. Any insights about why there’s so little negative feedback from, say the drum and bass community or the dubstep community?

I don’t know, because we have fucking cute teddy bears? (Laughs) No, but also I do think we always try to be nice with everyone. That goes a long way if when you work with people and, you know, see people on tour you have to remember everyone is there because they like the music and so it just doesn’t make sense to be grumpy or so high and mighty. I always try to be as nice as possible.

That’s a good policy and probably not one a lot of promoters are used to, but I mean technically as well I think people really respect your work. You’ve been all over the Noisia Radio podcast lately for example, and that brings a lot of respect.

Well, actually, I think they like Agressor Bunx a lot more than us (laughs),  because they literally play their music every show lately. We’re big fans of Noisia obviously, we all grew up with and were influenced by them. I think if you speak about contemporary drum and bass, you have to think of Noisia. We were definitely influenced (by them) and everyone at the beginning tries to make music like theirs. We are not the exception.  But we try to find our own sound as well, so I hope they like it. Or maybe since they have the show, they just always need music so we get lucky that way. (laughs)

That’s quite humble of you. Switching gears to the track we’re premiering, “Chopper”, which is probably one of the heaviest tracks on the album. What style were you going for there and what were your thoughts putting the beat together? Just generally how did the track come together?

Chopper is personally my favorite track on the album, by the way. Basically, there are two tunes on the album that are the same style: “Chopper” and “Coming for You” where it was the same concept, and we used the same techniques to make them. It actually goes back to the “Hyperspeed” EP from 2015, that kind of style where we mixed classic neurofunk with like crazy EDM-style basslines. So I see “Chopper” as a sort of round two in terms of that technique, but I think it’s a slightly deeper track as well in terms of what kind of bass we use, and then we did a lot of trying different sounds, randomly throwing things in to see how they worked with the bassline. It was a bit hectic at first but we finally hit on a structure that worked.

How did you get the idea of putting the motorcycle samples into the track in the intro and as the drop samples? Was it just because the bassline chugs along like a chopper motorcycle?

Actually I was re-reading the book with Hunter Thompson who was like a big motorbike fan, and I was just thinking how he described it and I thought it sounded like the way he described it, so then I wanted to incorporate that as well, so I literally looked at Google for like a cool quote about motocycles, and I found the one where Arnold Schwarzenegger says “get to the chopper!” (in “Predator”). There are a lot of things going on in the tune and it’s pretty weird, but it works and every time I hear it I catch myself nodding my head with it.

Is that how you see your composition style in general? Coming up with a core concept and then deciding which sounds fit in with it?

It’s different for every tune, really, but we generally are experimenting with sounds up to a point. We take a lot of things from neuro and try to mix it with other stuff from other genres. It can be metal, hip-hop… everything. It’s more  about finding a groove to the tune, so that’s why with songs like “Chopper” or even “Teddy’s Song”, it has a specific sort of jump-up groove even though it’s also leaning on techy. All three of us, especially me, are really big breakbeat fans from back in the day like 2 Bad Mice and again Fatboy Slim or Prodigy, so it still has to be a tune in some sense. So once we find that, then we start experimenting with sounds that support that groove, again like the process with “Chopper”, so it’s hectic but there’s always something to dance to I think. We make tracks for the dancefloor and we make what we like.

Is there anything else you’d like to talk about with the album or Teddy Killerz’s sound?

I’m really big on the animation, and we really want to incorporate that into Teddy Killerz. I think of Yasha (Jacob), who designed the Teddy Killerz graphic with the three bears as really like the fourth Teddy Killer because he is really brilliant. He’s taken care of all our album covers and helped us develop the concept of the scary teddy bears…Teddy Killerz would really be nothing without him. We try to keep the connection between music and visual images all the time. To me they go together very much.

Any final words for fans or other producers?

Get to the chopper!

“Nightmare Street” releases in full on RAM Records on June 2 and can be pre-ordered now on itunes and Spotify.