As a music lover, I try to make time for events outside of just EDM. In the past year, for instance, I’ve seen Goo Goo Dolls (twice), Vince Staples, and later this year I’ll be seeing Foo Fighters and Queens of the Stone Age. (And hopefully also Kesha?) My point is that just because I write for an EDM blog doesn’t mean that’s all I listen to.

When I was invited out to see Korean mega pop star G-DRAGON perform at the Forum in Los Angeles, I was raring to go. I’ve known of G-DRAGON since his time in the group BIGBANG, which I listened to a lot in high school along with groups like 2NE1 (CL’s original group; both artists collaborated with Skrillex on “Dirty Vibe”). So to see him solo was an exciting premise. I knew that he was a huge artist in Korea, at least, so I assumed that the level of production he brought would be something incredible. I wasn’t really ready for what I ended up seeing.

For those not in Los Angeles, the Forum is one of our larger venues in the area, comparable really only to the Staples Center. It’s where the Lakers played until 1999, and why it became popular. I give you this context to give an idea of the size of the arena, and the comparable size of a stage therein. For reference, I’ve also seen System of a Down at this venue, and the Gorillaz will perform there later this year. 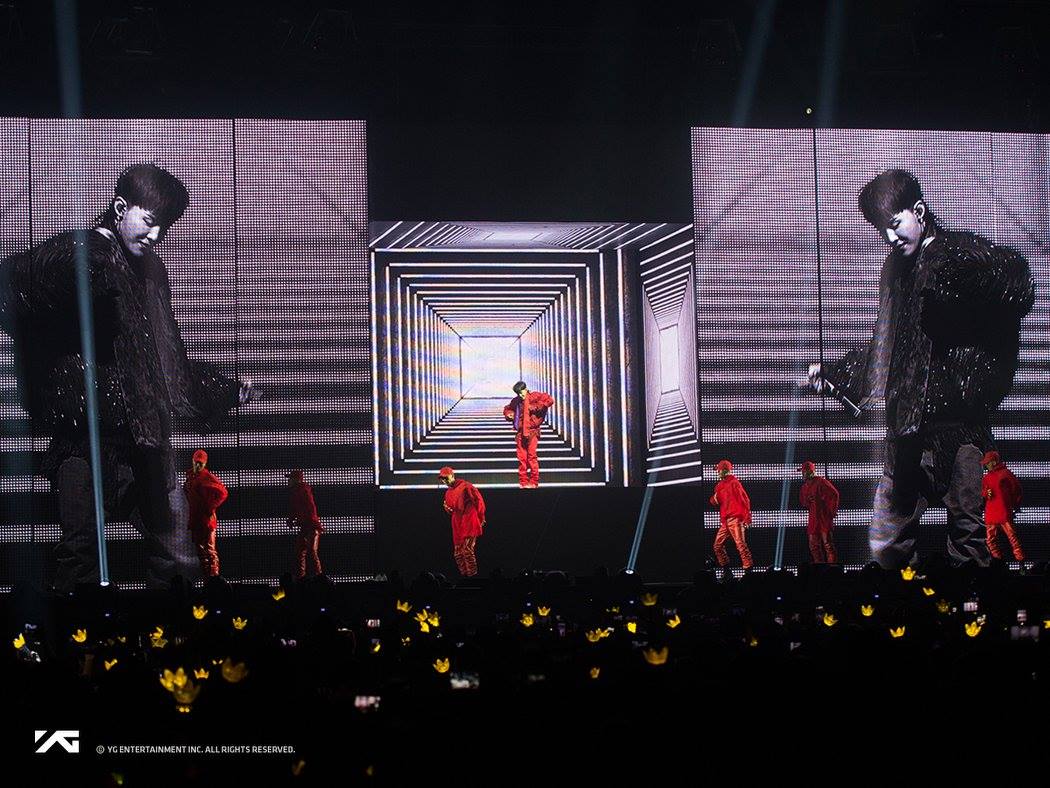 G-DRAGON’s stage was bookended by LED panels, two large ones on each side of the center of the stage, reaching from the floor to the ceiling, that rotated and allowed for various configurations available to the audience. The center of the stage was set up with another LED panel and more mechanical functions with the actual stage, such as risers and suspended wires.

G-DRAGON himself is a terrific dancer, singer and performer, so he had no problem navigating all of this technology and spectacle while keeping the spotlight squarely on himself. And there were many spotlights… in addition to the LED panels, the stage was framed on the top, bottom and sides with spotlights, making for an immersive experience as the lights twirled and twisted every which way. And of course, fireworks and pyro were also present.

Music wasn’t the only thing played at the show, either. As a performer, your options for interacting with the crowd are infinite, and it takes a creative person to do something new. Sometimes, however, it’s good just to talk to people. At various points during the performance, a pre-recorded message from G-DRAGON would play on screen and over the speakers, with topics ranging from interviews with friends and family, to G-DRAGON speaking himself, to music videos from his catalogue. It kept the audience engaged – even though we all would have been just as enthralled watching him perform for the entire show.

All in all, the performance lasted around two hours. From start to finish, G-DRAGON had the crowd in the palm of his hand – the sizable Korean population in Los Angeles not withstanding.

Watching the performance as a lover of both EDM and… everything else… gave me the sense that EDM definitely has not peaked. We’ve been doing the DJ/turntable thing for a while now, and it’s been great. But having seen what Armin van Buuren can do at this same venue just months before, also with dancers and guest bands, makes me believe that there’s room for so much more. As more and more artists start to embrace live sets – Ookay is debuting a live show at Nocturnal Wonderland in September – the type and scope of performances will continue to flourish and grow.

Until then, we’ll have to depend on the lights and visuals to give us the show we know we deserve.

Thank you to G-DRAGON, the Forum, and YG Entertainment for having me out.