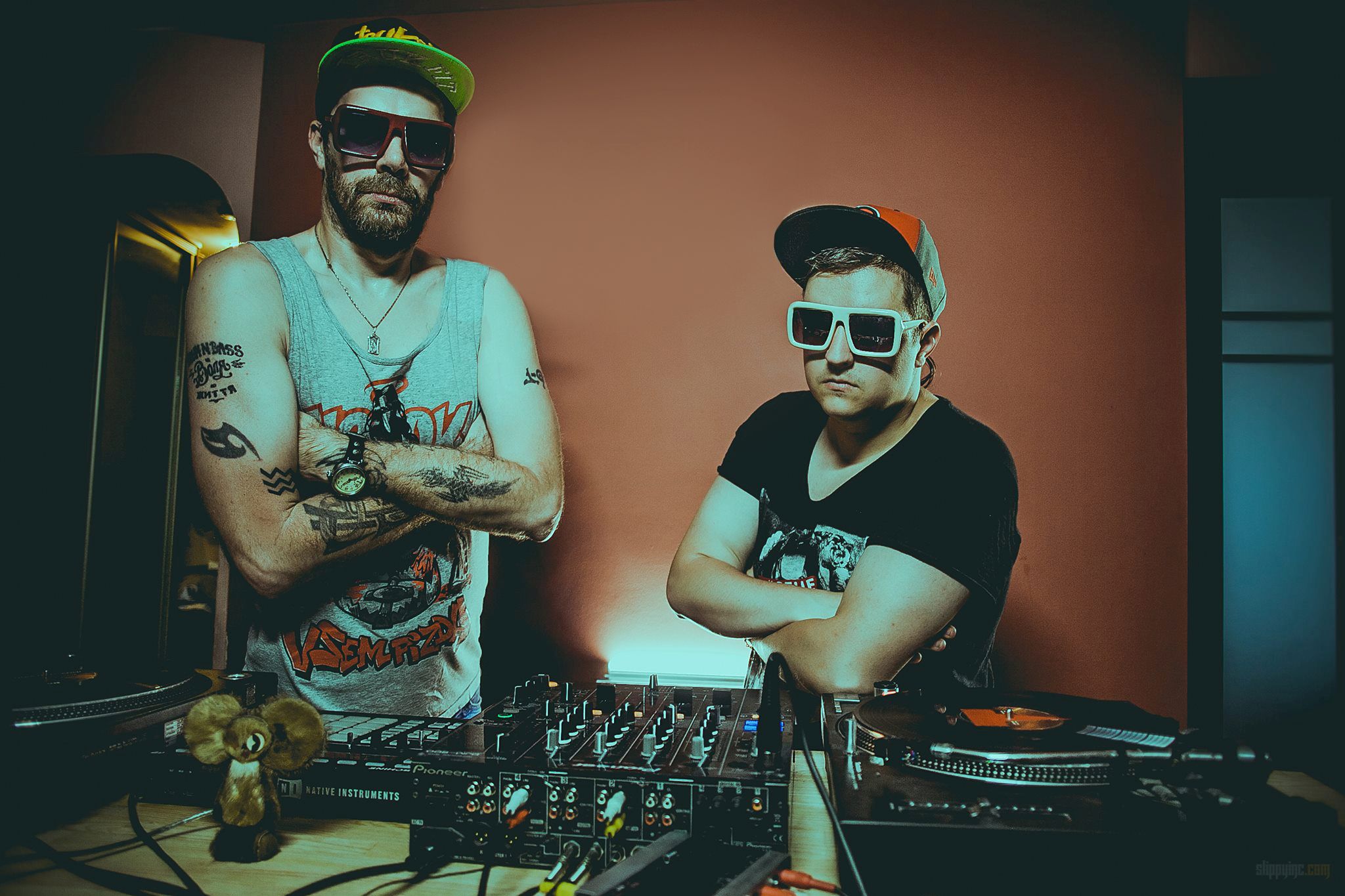 Q&A: On the Heels of Their ‘Modern Innovation’ EP, Tapolsky and VovKING Talk Technique and Technique Recordings [Video]

2017 saw more and more producers from Russian, Eastern European and Near Asian countries making big release moves than ever before in drum and bass, halftime, dubstep and trap. Hardcore heads have known for a while that there is major talent and more than a burgeoning scene in places like Estonia, Hungary and the Ukraine but last year definitely seemed to be a windfall for talent from these areas.

Largely on the neurofunk, techstep and darkstep end of things, labels like Critical, Eatbrain and MethLab pushed these new Eadtern European artists with great results, but some fans may have been wondering if other genres could be represented in these scenes. Enter Technique and Ukrainian production duo Tapolsky and VovKING. Technique Recordings of course has a knack for sussing out new and interesting talent with a diverse edge, and these two are definitely very diverse.

Tapolsky and VovKING’s new Modern Innovation EP out on Technique combines classic DnB beat combos and vocal sampling with modern, melodic synths make these five tracks jumpy, danceable, liquidy and technically interesting all at once. Your EDM was curious to find out how Tapolsky and VovKING came to find drum and bass, how they started working together and how they put together one of the most interesting and diverse EPs of 2018 so far. They gave us an insight into the scene in Ukraine as well as their process and how they came to work with Technique.

Can you briefly talk about your production history? How did you get into electronic music?

Tapolsky: I was actually one of the first DJs in Ukraine, and the first DnB promoter here as well. Most huge drum and bass events in Kyiv have made with my being involved in some way.

VovKING: I’m more a representative of the new wave, started to play in 2007. I was very technical DJ, but made the ascent to production after a while. In 2010 released my first breaks tunes and made breaks for a few years.

How did you come to work together? What was the general inspiration for this EP project?

VovKING: I made my first dubstep remix and sent it to Tapolsky. We weren’t familiar at that moment. It was 2011 and that dubstep fever was mowing down everything in its path at the time, and Anatoly (Tapolsky) liked my sound. We decided to make a remix together for this really famous Ukrainian band called Skryabin and it became big hit here. A lot of the big music channels, called Central channels, played the video for that remix where Tapolsky played it at Global Gathering UA. After that we started to make more &\and more stuff directly for Ukraine with local vocalists, rock and pop singers and bands.

Tapolsky: When it comes to inspiration, we feel we don’t need a lot of inspiration, because music is our passion and we just do our thing.

The sound on the Modern Innovation EP is very different from anything the label has put out thus far, but somehow it still fits very well with Technique. How did you come to work with Technique on this project?

We sent some demos to Simon Bassline Smith last year and Technique released three of them in a big Summer LP. Our tune ‘88’ made some waves in the DnB community. Camo & Krooked even played it in their Essential Mix We received a lot of good feedback.  After a while Simon messaged us and we decided to do an EP. We think it’s cool that Technique are not scared to be experimental and try something new and different. We think that’s the right way and it was definitely good for us. That’s why the label is so huge and well-known.

Did you design some elements into the tracks consciously to go with your conception of Technique’s sound or was it just right place right time?

No, we just do what we want. We experiment with the sounds, blend different genres to get the result that suits us. And yes, it’s just the right time for our stuff and right place!

What are some of each of your major influences? How did those play into the EP?

Tapolsky: I do a lot of parties & live streams in different parts of Kiev and Ukraine. The streams are free events that a lot of people want to visit.  Also we made a stream on the sea bank with no people

I like to travel, do sports. Seeing all the happy people on my travels and parties new countries and new activity is inspires me a lot.

VovKING: Music is my main inspiration. I live in the west of the country in small town in mountains. I like to spend time close to the nature. Some trips, gigs, friends, love – those are the best motivators and inspiration for me. Also, when you are new on the stage, I mean worldwide stage, you are hungry for all of that, and everything is new for you and you want to dive into it. Also I pray a lot to be always neutral and concentrated.

Most of the tracks on this EP have a lot going on: unconventional structures and sound design but also a real soul and funk element to them. How did you marry those two elements?

We want to be unique and creative at the very least. Everybody is tired of that standard break>build>drop scheme. Everybody wants to sound like a reference-tune that they picked for the project. That’s why electronic music is bit dead at the moment. We wanted to keep things interesting. It’s not customary for listeners in some ways (on this EP) but we don’t make music only for money and attention. It’s just the product that we want to produce at the moment. To us it’s innovative-sounding music that you can also call drum and bass.

There’s a lot of unexpected syncopation on this EP, like in “Running” and some dirty drops like in “Deep Disco.” What made you want to put these elements together with all the melodic stuff on these tracks?

Life now is very different in the world and with us personally, with a lot of stuff going on every day. It leaves mark on the music too. Something unexpected happens with you and then the ideas that you put in your tunes become unpredictable too. For example, today you’re just local DJ and tomorrow you’re on Technique Recordings with couple of plays on BBC Radio 1 in profile. You just mix the ideas together to hear the result. And if you’re happy with it, that’s it!

Do you think it’s important in the current climate for producers to be open to all the various subgenres in DnB? Did you think about that fusion and its implications on the wider music scene when putting the EP together?

Drum and bass is full of that neuro stuff and it can become boring. It’s not bad music, but we think it’s very predictable. All the new-sounding DnB that’s coming out recently is the future of the style. It’s like a breath of fresh air. That’s why we like to call it Future drum and bass. More and more producers start to experiment with the sound and make and more melodic, because its music. Dnb will change, it’s just about time. The skill to predict and feel what the style needs in the close future is the thing that distinguishes good producer from bad one.

Were the vocals for each track sampled or original? The way it’s designed – sort of vintage – many fans may wonder is that was that done on purpose?

All the vocals are sampled at the moment. We like to sample and process vocals. It’s one of the main components in electronic music, after all. For example the “Flame” vocals: it’s just one phrase, “I give you my fire” that was sung by female vocalist. We processed it and it started to sounds like a male’s voice and then tuned to make different annotations on every bar. That kind of processing is very exciting and interesting for us.

What was each of your favorite parts about making the Modern Innovation EP and about how it turned out?

As we said earlier, we are hungry for all of that new experience in the worldwide DnB community, so we just wanted to finish the EP quickly. We wanted to make it sound like it integrates with the larger DNB sound but also keep things interesting. The first tune was “Running” and we left it first in the tracklist because it has good opening piano intro and a dramatic atmosphere.  Then we made “Flame,” which is Tapolsky’s favorite, and then “Cosmic Symmetry”, so it was about the progression of the tracks in the EP for us.

VovKING: I remember I just played some random stuff on my MIDI keyboard and hit on those sweet future sounding chords, then I made some simple bass on the bottom of it and sampled the vocals. And then started to develop the idea. I sort of did the same to make “Cosmic Symmetry” complete. I don’t have music education so I just play and produce intuitively. Then to dilute the sort of sad mood we decided to do some cheerful future bass-influenced stuff so that was “Deep Disco.” It has different parts in it and it’s closest to that regular DnB sound in some ways.

What are your next steps musically? Any new releases soon? Collabs or tours?

We need to finish some new tunes. We won’t release or even show the stuff we’re working on until we’re happy with it. We’re making some collabs with vocalists, so some of our new material from us will have original rather than sampled vocals. Other than that, we don’t want to discuss until we’re finished!

Tapolsky: I’ll also keep working on my events. I want to make more interesting streams, more parties. A lot of cool things are on the way!

VovKING: I’ll be starting another project soon. I like a lot of other genres of music like bass house, dubstep, hybrid trap so I want to work in those genres as well but we will make drum and bass together too.

What’s one fun thing each of you can say about working with the other one in the studio?

The most fun thing is that we live in the different parts of the country. It’s around 700km between us and it’s always cool to make demos and send them to each other and hear the feedbacks and watch the surprise from each other’s the sound ideas.

Tapolsky and VovKING’s Modern Innovation EP is out now on Technique Recordings. It’s available on Beatport or via other outlets by clicking here.