The Do LaB Announces Diverse 2018 Lineup for Coachella

We’re nearly three weeks away from the first weekend of Coachella. Excited yet? In case you’re not as excited yet, just wait: the Do LaB just announced its stage lineup for Coachella.

The Do LaB celebrates 14 years at Coachella with its diverse 2018 lineup. The lineups vary across both weekends, but there’s enough here to get a festival’s worth of entertainment at just one stage. Weekend one’s lineup pairs house artists like Chris Lake, Fisher, Lauren Lane and Ardalan with future bass and bass acts like EPROM, DROELOE and more. Meanwhile, weekend two’s lineup contrasts techno and house DJs like Thugfucker, Sage Armstrong, Behrouz and Moscoman with trap and bass up-and-comers like Luca Lush, OSHI and Melvv. Plus, renown singer/songwriter Anabel Englund will make an appearance.

The lineup already packs a punch, but secret guest headliners will play on the stage as well. Last year’s surprise guests included Skrillex, Tycho, Louis The Child, Richie Hawtin, Classixx, Eli & Fur, Autograf and RÜFÜS DÜ SOL. Schedules for the stage will be announced closer to each weekend.

Check out the full Do LaB 2018 stage lineup at Coachella below: 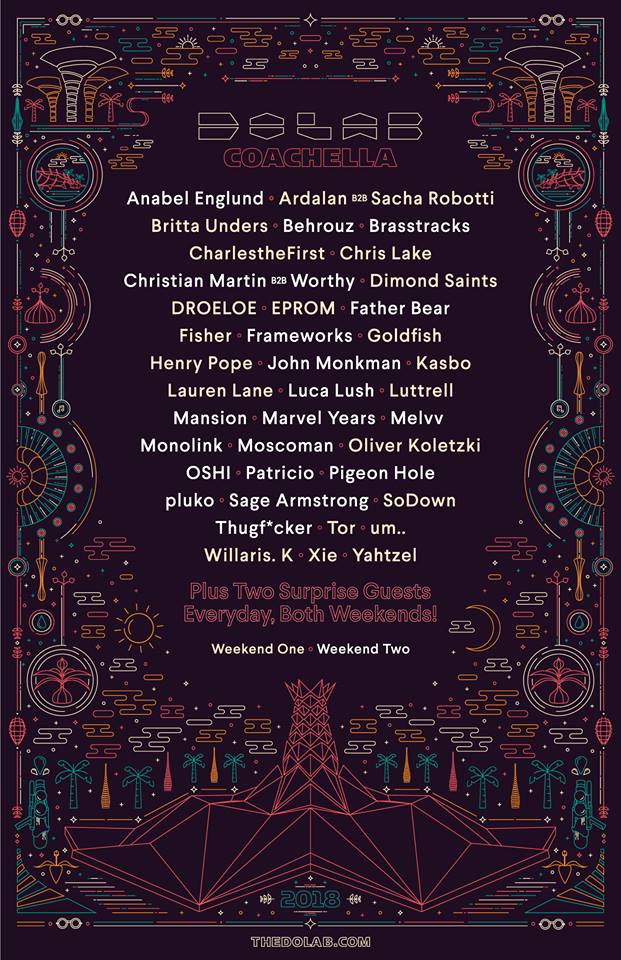 Do LaB at Coachella 2018 Lineup

deadmau5 Reveals ‘Where’s The Drop?’ Track List On The Eve Of Pre-Order Day

deadmau5 Reveals 'Where's The Drop?' Track List On The Eve Of Pre-Order Day