Steve Angello Has An Important Message For Fanbases Everywhere

Steve Angello is never afraid to speak his mind and he has a very important message for all fanbases out there, especially those heavily active on social media. In an age where artist-on-artist beefs spark frequently on the internet, he believes peers and fans can make all the difference.

In the past week, some really strange and heartbreaking things have happened…

XXXTentacion was shot and killed, and with an investigation still underway many fans jumped to the conclusion that fellow rapper Soldier Kidd had something to do with it. Mainly, because he was photographed eating down the street from the crime, with a gun in plain sight. He then felt the need to jump on social media to address and deny the claims.

In the EDM world, there’s all the Max Vangeli vs. Diplo drama going on, in which Zedd got involved in the crossfire. Fans are choosing sides and saying a lot of hurtful words on social media without knowing what’s going on. Some attribute Vangeli’s bizarre behavior to mental health and others say it’s a publicity stunt — but really, who knows?!

There’s also Dash Berlin frontman Jeffrey Sutorius’ announcement that he was leaving the group, leading many fans to discover that Dash Berlin was a trio in the first place. Many jumped to the conclusion that the two were ghost producers for Sutorius, but in fact they’ve been credited on every release and were even a part of the rise of Alice Deejay in the early ’00s.

Those are just a couple of examples of fanbases pitting themselves against each other. And these things happen every single day. So back to Angello’s point in all this, which serves as a blanket statement to any situation…

Millions of people support and add fuel to the fire of young artists arguing. You push artists in becoming more and more violent cause you are locked in your houses watching these kids go wild over social media motivating them to do more of what entertains you. [Then] when someone gets hurt you feel bad for them.

Think about it.
It’s not a game
This is real life for a lot of people.

Fans [have] the power to change the attitude of artists and the way they think by showing love and support. A lot of guys out there need love. Not motivation to hate.

Be careful what you say, because it matters. Read Angello’s full statement to fanbases everywhere below. 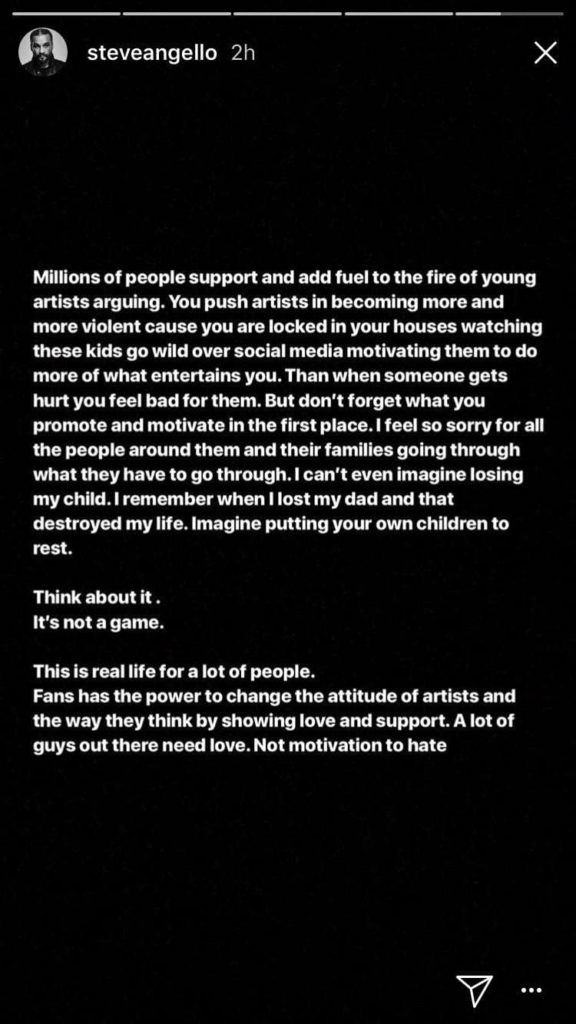